Hi everybody.  I was at CES today and at the Samsung CES booth where they had some NX1 cameras mounted around a photo booth with a couple of models in a living room setting.  I happened to notice that 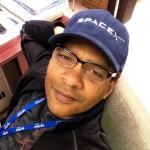 ". . .Particularly interesting is that Samsung will make an SDK available with the firmware update for developers to make their own apps and remote control software for the NX1, which runs from an ope

yes a lot of times you can reach out to companies and express your thoughts on how to improve their product.  You are doing them a huge favor by being out in the field testing them.  Samsung is showin