Whatever happened to the EVA1? 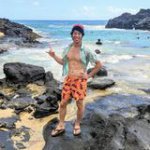