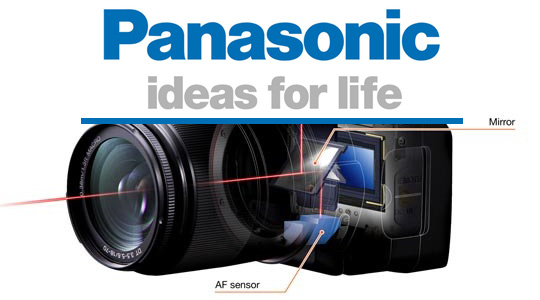 Every wondered how the Sony Alpha series delivers a live view image from a very small sensor in the viewfinder housing without cropping, mimicking the field of view of the main CMOS, while enabling super fast phase detect AF at the same time? (Deep breath). Well, it seems Panasonic did wonder this, and plan to bring such innovations to a range of lenses previously not fully compatible with mirror-less bodies.

Phase detect AF is good news because prior to this adapter a lens needed to be compatible with contrast detect AF and would require a firmware update. This is not always possible, which is why not all Leica Four Thirds lenses from the past support AF at all on the GH1 or GF1.

A switch to toggle between the in-camera contrast detect system (CD) and phase detect (PD) mode is on the side of the adapter.

The next bit is more significant…

The adapter contains a system of mirrors similar to how the Sony Alpha DLRs delivers live-view from the lens by deflecting light into a small sensor within the view finder housing. The proposed Panasonic adapter electronically manipulates the image from a system of mirrors to make it possible for the main sensor to pick up a reduced version of the full image circle normally projected by the lens.

The result is a ‘blur-free image’ with a full frame focal length. Just as the small sensor in the viewfinder housing of the Sony Alpha DSLR can give a full field of view in live view mode while enabling phase detect AF!

Since this technology already exists and is patented by Sony, Panasonic will have a job getting the idea patented themselves without some hefty tweaks and may have to pay Sony a license fee for each adapter they sell. But I would be happy to pay more for such an adapter, should it finally hit the market.

A nice wide 24mm lens on the 5D Mark II is designed to deliver a 24mm focal length to a full frame sensor, but we all know that such a lens becomes 48mm on the GH1 due to it’s 2x crop sensor size.

With this adapter, that would be a thing of the past.