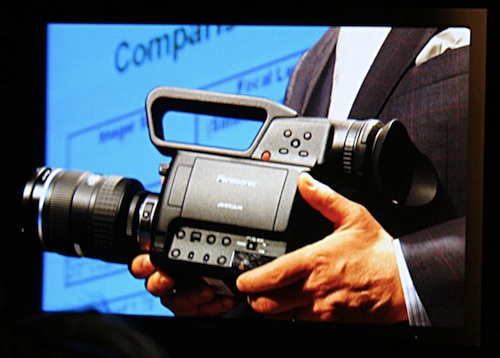 Here are some to start it off. I’ll be seeking to ask Panasonic and to get some answers!

The first interchangeable lens Micro 4/3rds camcorder is due to be released later this year and of course this is great news – so good to see Panasonic making intelligent use of their investment in the existing Micro 4/3rds technology.

I think the Micro 4/3rds adaptable lenses will rocket in value as there are so few Micro 4/3rd mount lenses available right now.

• So my first question is – will we be getting cinema optimised lenses from Panasonic, that we can also use on the GH2 when it comes out? These might be cinema primes with focus rings optimised for pulling focus in video, or even an adapted version of the only HD video optimised lens Panasonic currently have, the 14-140mm zoom GH1 kit lens.

• The HD-SDI feed – is it live during recording, and uncompressed?

• The effective megapixels of the GH1’s sensor is 14MP, in a 16:9 aspect ratio which also supports 4:3. Will the AF100 feature exactly the same sensor? It’s marked as 12MP on the presentations – the same as the stills output from the GH1.

• Is the sensor optimised for video? Why the high 12MP resolution on a 2K camera?

Now a lot of people will be wondering ahead of time whether to go for a AF100 or GH2. I think for a number of people who don’t need some the pro features and handling, the GH2 will be a better buy. I personally won’t be abandoning the size advantages of Micro 4/3rds HDSLRs for this monster, great news though it is. The size aspect is one of the big advantages of these cameras. There is a part of me which says – yes the pro features like XLR jacks are nice – but the bulk and price are disadvantages. Also if the GH2 has the more recent sensor, with global shutter – the AF100 might be a hard sell, despite the inevitable excitement from many professional film makers who absolutely MUST have this kind of camera with the features it offers.

Here is the actual prototype at NAB:

I don’t think these professional cameras will kill off the HDSLR movement, which is for the masses and a lot lighter on it’s feet.

If anything this step is good news for GH1 and future GH2 owners, who can use any specially developed cine primes on their cameras too, for example from Leica 😀