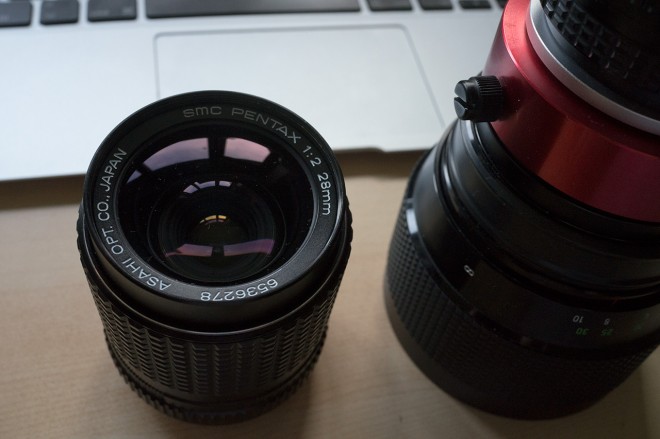 The Contax Zeiss Distagon ‘Hollywood’ 28mm F2.0 is a classic fast wide for full frame and is incredible on Super 35mm as well. Wide open it’s one of the sharpest F2.0 wide angle lenses available and it has very little distortion.

The Contax Zeiss version fetches $800 on eBay but there’s a $60 wolf in sheep’s clothing called the Pentax PK 28mm F2.0 which has a fascinating story behind it.

In the early 1970’s Zeiss began for the first time to reach into Asia, tapping into cheaper manufacturing costs and an increasing level of expertise there. At that time the Japanese optics industry was just beginning to come on song with Canon, Nikon, Pentax and Olympus leading the way.

Zeiss would begin a long partnership with Yashica but what happened first is little known – they partnered with Pentax, an R&D relationship which lasted for 12 months.

Although the partnership was mainly to develop advances in Zeiss’s T* coating, significantly two advanced Zeiss designs were put on the market by Pentax; the 15mm F3.5 and 28mm F2.0.

The Zeiss Distagon 28mm F2.0 ‘Hollywood’ was designed by one of the 20th century’s greatest lens designers – Dr Erhard Glatzel (below). He was responsible for the Apollo mission medium format Distagons used by NASA and the 50mm Planar F0.7 used by Stanley Kubrick on Barry Lydon. 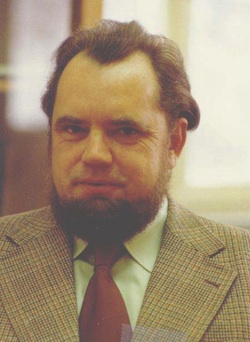 Glatzel’s 28mm F2.0 ‘Hollywood’ pioneered a floating element for better performance at close focus and was so ahead of it’s time that today’s ZE / ZF mount $1300 Zeiss 28mm F2.0 is virtually unchanged in terms of the optical formula. Today the original Contax Zeiss 28mm F2.0 regularly goes for more than $800 on eBay. The Pentax 28mm F2.0 on the other hand can be found for between $60 and $200. I found one for 200 euros in Berlin. They’re not common but when they do come up, they tend to be unappreciated.

At a time when Germany was split between West and East, so was Carl Zeiss. Their original HQ in Jena was in the GDR Soviet controlled East and we have soviet spies to thank for the high performance of the Helios 58mm F2.0 and Jupiter 85mm F2.0!

Glatzel, from West Germany went to the University of Bonn and joined Zeiss AG in Oberkochen (the West German version of Zeiss) where he quickly rose up the ranks and became responsible for the company’s most important products. He designed the Zeiss Distagon 28mm F2.0, almost completely distortion free 16mm F8.0 Hologon and the floating element Contax Zeiss Makro Planar 60mm F2.8. Later he was to become chief optical designer and although an old school scientist he took the company into the era of computer designed optic and of course designed those NASA lenses.

Pentax’s lenses are also superb for anamorphic shooting, below is the 50mm F1.7 on the Isco Centavision 2x. 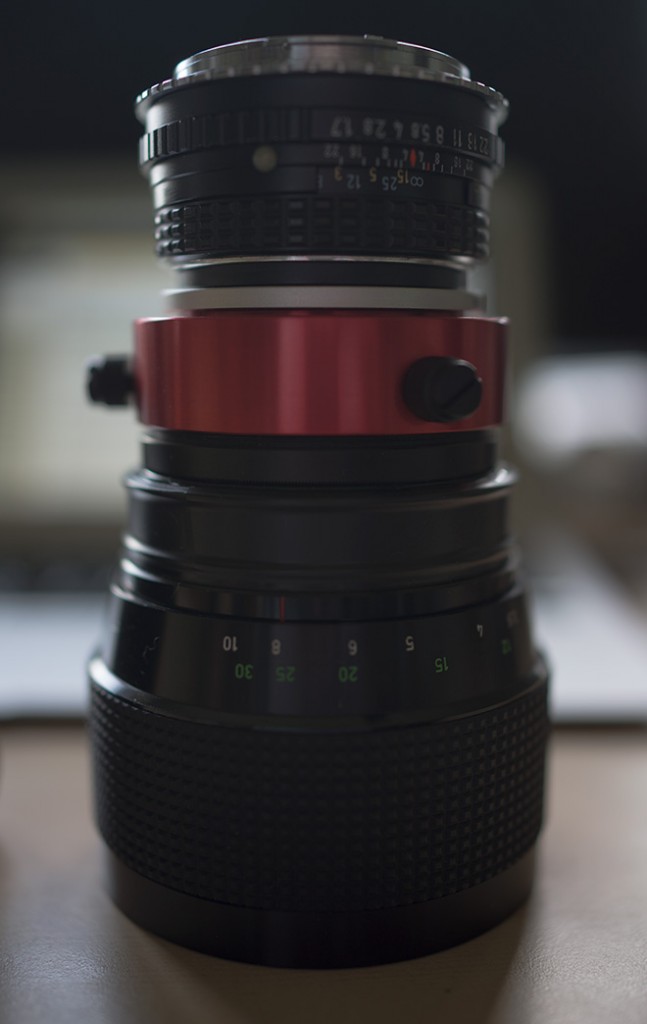 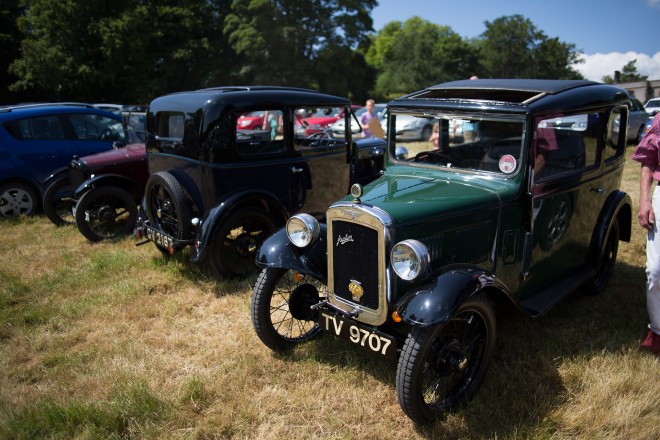 Above: Shot taken in Derbyshire, England with the Pentax K 28mm F2.0

The optics for Glatzel’s Zeiss 28mm F2.0 were shipped out of West Germany to Japan in 1976 and assembled by Pentax in their own casing. The build isn’t as good as the Contax Zeiss version. It requires a modification to make it work on the 5D Mark III without a mirror hit. To do this you need to unscrew 3 small screws on the side of the mount holding the protruding piece of redundant plastic casing and bend back and forth the aperture lever for old Pentax bodies until it snaps off – you don’t need that bit on a Canon DSLR. It has no function and instead stops the mirror moving up or down during a shot or when entering live view. 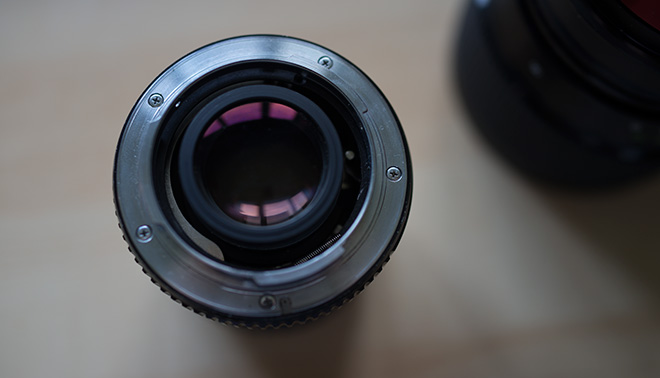 That part is relatively simple but I actually went a bit further than I needed to. I took the whole back off to find out if it was possible to remove the aperture lever altogether so it could be added back in later in case I needed it on an old Pentax body. It can’t but this did lead to a useful discovery – the possibility of a stepless aperture ring. The de-clicking is done simply by removing a ball bearing fixed in position behind the aperture ring. Doing so however is quite fiddly. 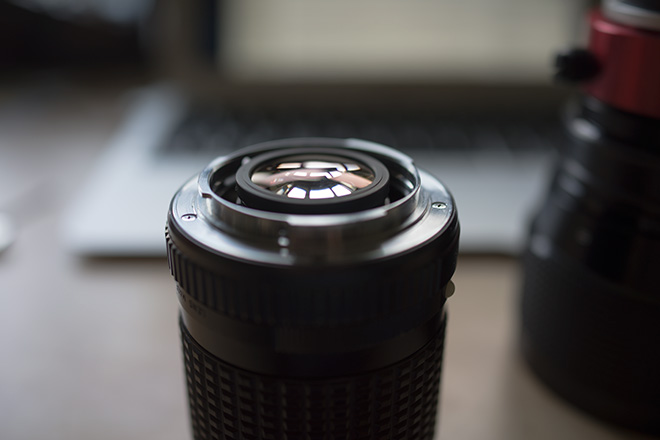 Above: almost zero distortion from the Pentax 28mm F2.0 on full frame

Zeiss to date have never released a faster wide angle lens than the 28mm F2.0. However it turns out Glatzel was working on a 25mm F1.4 which never saw the light of day. Until now…

Earlier this year Glatzel’s grandson was left a collection of lenses by his family, with his grandfather having passed away some time ago.

Amongst the lenses was a prototype Zeiss 25mm F1.4 and 18mm F2.8 straight from Glatzel’s case. It turns out these are some of the rarest lenses in the world. The 25mm F1.4 is a mythical piece of glass that has never before been seen but has long been rumoured exists. 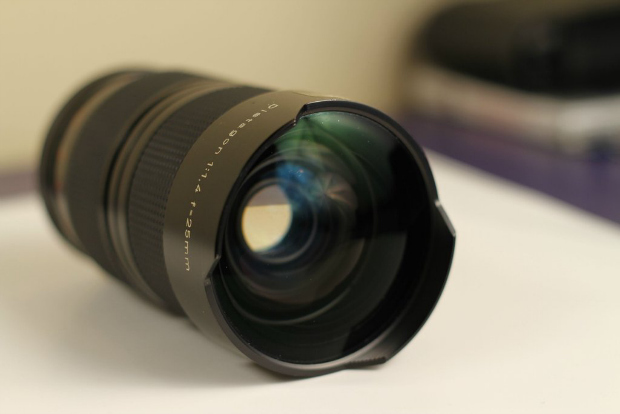 Here’s Glatzel’s grandson posting about the lens along with some sample images over at the MFLenses Forum. 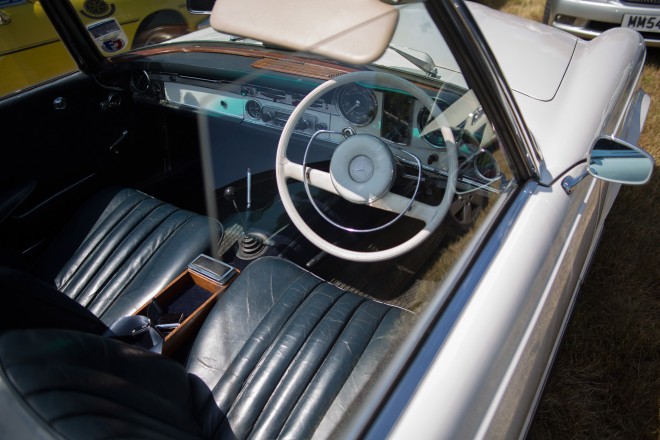 Above: sample from the Pentax 28mm F2.0 wide open on the 5D Mark III

I also have some of Pentax’s pancakes which I find good partners for my anamorphic lenses. The Iscoramas work best with small front elements and simple optical formulas with as few elements as possible. A short stocky lens also helps to get the weight of the anamorphic attachment as close to the camera as possible and makes for a shorter block altogether which doesn’t require rails for support.

The old Pentax K 45mm F2.8 is officially a pancake and incredibly thin. The Pentax K 50mm F1.7 is officially just a very compact standard lens but it’s so short and light you can easily classify it as a pancake. Both are incredibly sharp wide open with the Iscorama anamorphic. I shot with the Isco Centavision 2x and Pentax 50mm F1.7 at the weekend and the footage will be part of my upcoming Canon 50D raw review.

If you are as addicted to lenses as I am, please call Lenses Anonymous on 0800INEEDHELP.