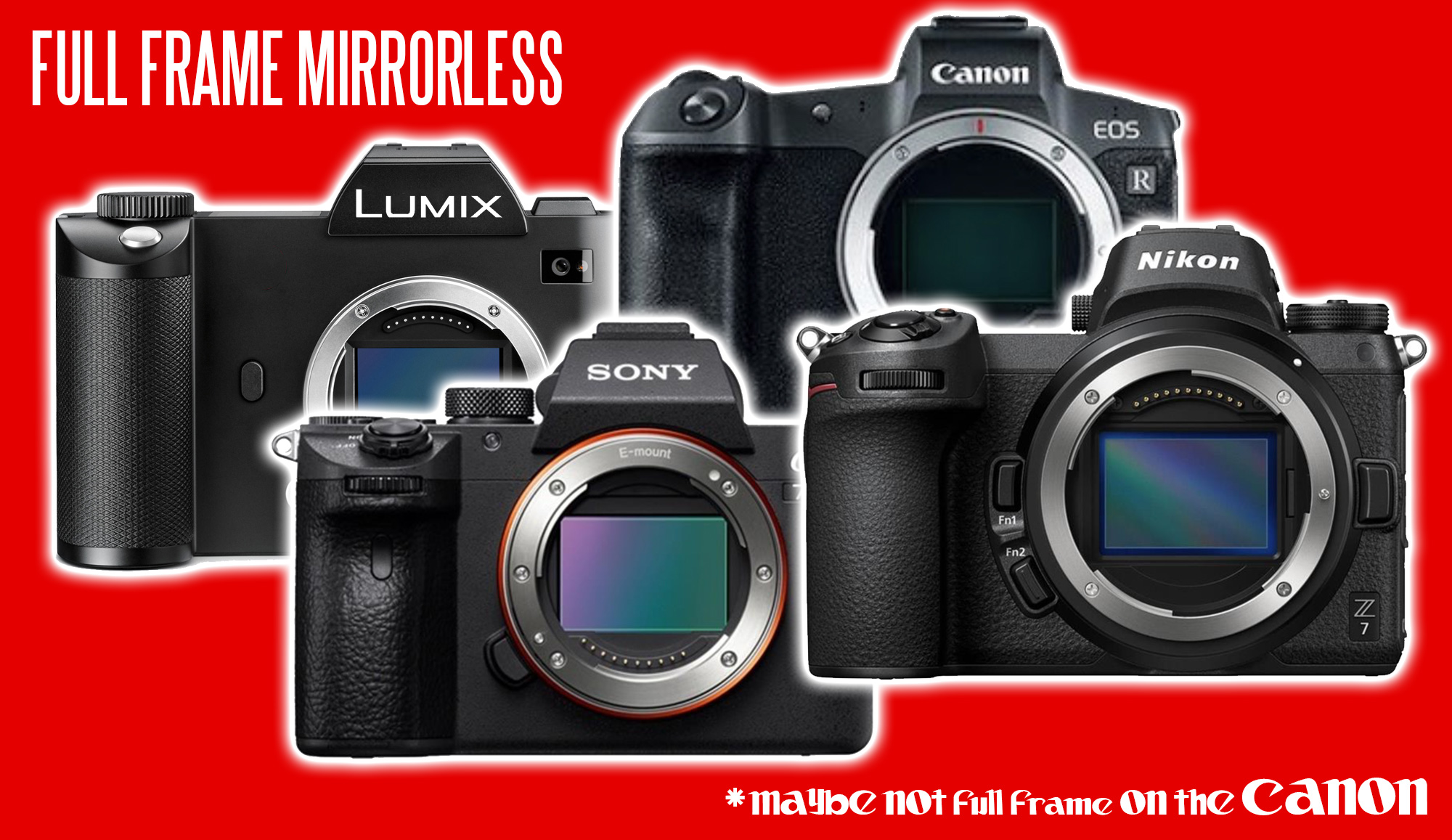 Now some of the dust has settled in the 2018 full frame mirrorless game, we can start to get a clearer picture about what’s on offer.

I would suggest Panasonic’s involvement in full frame mirrorless actually goes back to 2015 with the Leica SL. They’re not a newcomer. In my view, the high-end Leica was Panasonic gearing up for a full frame mirrorless camera of their own. They have been in mirrorless longer than anyone. 10 years. Canon have not been serious the whole time. Neither have Nikon (until now).

So although on paper “brand appeal” dictates Canon should run away with it as usual, with Nikon and Sony dicing for second place, I think the combined force of Panasonic/Leica/Olympus (if they share the same mount) will produce the best, most feature-packed camera (especially for video). And it is the best camera and lenses you should buy. Don’t be blinded by the Canikon hype train.

However, what if Panasonic, Leica and Olympus go separate ways when it comes to full frame, with completely separate mounts and lenses? Will there indeed be that critical collaboration between Panasonic, Olympus and Leica as there is with Micro Four Thirds? I think the Leica SL is the superb basis from which to launch a full frame GH5 or a full frame E-M1. I think they should go at it as a group effort.

Let’s bring all the cards up on the table…

The body, and video features

Only Canon could name their mirrorless camera after a mirror! “R” for “Reflex”?! What does it stand for? I have no clue. What we do know is it is rumoured to cost $2000 and leaked specs suggest it’s based around the 5D Mark IV. That leaves room for (hopefully) a higher-end model. What I do like about it are the ergonomics, stills side and two of the new lenses. What I don’t like about it has nothing to do with stills and everything to do with the leaked video specs. I would not expect the EOS R to suddenly outdo the 5D Mark IV for video capabilities let alone top Panasonic and Sony. In fact looking at the leaks, it does not top Fujifilm or Nikon either, both of whom are now offering 10bit LOG. That means Canon are dead last, still with no full frame 4K or IBIS and a lot of other things too. I hope Canon has two models and not just the lower-end $2000 EOS R. Besides, this is SUCH an important camera for Canon. Why use an OLD sensor?

The mount and lenses

If as expected 4K video on the EOS R is a 1.75x crop, we won’t have the native glass to match it from Canon. R mount has a longer flange distance than EOS M mount, to prevent those 1.6x crop APS-C lenses fitting at all. Canon have employed this strategy before making EF-S lenses unable to fit full frame EF cameras, but Sony has the same mount for their APS-C and full frame cameras, which is a much kinder approach to their customers. Now the good news… We get a very exciting new 28-70 F2.0 and 50 F1.2. The EOS R 50mm F1.2 makes Nikon’s 50mm F1.8 Z look a bit embarrassing (and overpriced). The F2.0 zoom is a world-first. Nikon is betting on their users caring about size. Personally I care more about the look. Canon has the right strategy with this line-up. Yes, they’re big and heavy even by DSLR standards, let alone mirrorless, but they’re going to sell big. The two lenses will be one of the main reasons to buy an EOS R, but when it comes to shoots that demands more than just stills, people are going to be left wanting by those dated video specs.

The body, and video features

Nikon insist it is pronounced Zee not Zzzzz. Yes the launch lenses are boring, but I really do like the Z6 and Z7 bodies. I do also like the 4K image from my D850 a LOT. I think the Nikon 4K codec, their own sensor and Flat profile produce an all-round great image which is really special. It’s a dazzling technical achievement considering it’s coming off a 46MP stills camera. I also think Nikon have got the pricing right. The cheaper Z6 with full pixel readout 4K, along with the resolution-topping Z7 don’t leave anyone wanting. The A7 III and A7R III both have serious competition now. I think I will probably buy a Z7 and sell one of my Sony bodies.

The mount and lenses

Given Nikon’s great optical history, it really is surprising they got the launch lens strategy so wrong. They have chosen to trim a bit off here and there, losing some weight, with the result being a $900 50mm F1.8?! Who wants that?! I would not expect stellar 4K autofocus performance with older Nikon lenses via the adapter, as they have a slow mount protocol bus. This might initially be a manual focus only camera for me in video mode… What a shame.

A lot of us are Sony Alpha owners. I am, and have invested heavily in Sony products. But because Sony and Zeiss massively overprice the lenses I don’t feel locked into the system. I just kept my Canon lenses along for the ride. I have a Batis or two. I have the Sony 35mm F1.4, but I don’t have anything that isn’t available in Canon mount. Sony’s other problem is that they never did a good enough job on the design and colour science side. They have improved only with the most recent models, but the improvement is very evolutionary. Like an evolved potato. Still essentially a potato. The grip is too small. The screen and EVF too mediocre. The buttons and dials are too close together. I exhale a sigh of relief when I switch to my Fuji X-H1. That’s a shame, because there is nothing wrong with my A7 III or A7R III on paper. Superb specs and even colour science is now much improved, especially with the extent you can change and tweak things with the Picture Profiles and EOSHD Pro Color.

Now I look into my crystal ball. Until now Sony only had the Leica SL and Leica M series as high-end full frame mirrorless competition. Now they have Canon, Nikon, Panasonic. I cannot say for sure what this means for Sony’s sales, but it isn’t good. The A7S III will also be at risk, because video and low light have got a LOT better on the standard models. Sony’s own A7 III gives me little reason aside from higher frame rates and 10bit to upgrade to a special video / low light model. What WOULD change that, is a new ergonomic concept, a huge EVF and a built in E-ND filter like the FS5. Then you might say, why not just get an FS5? Because the video camera ergonomics are even more fussy, even more charmless, dreadful built in EVFs, needs rigging up, etc. FUSS FUSS FUSS. That’s why! Besides I WANT the full frame look for video as much as I absolutely NEED it for stills.

Let’s rewind to 10 years ago. Sony A-mount peaked with the full frame Sony A900 of 2008. A great camera, it had all the hallmark of Minolta’s designers. Now that’s all gone. When the first NEX camera came along it was a consumer electronic device first, camera second. Same with the A99. It has the feel of a gadget, not an artistic tool. Fast forward to 2018. I miss the Minolta design ethos of the A900. I miss the HUGE viewfinder. The chunkier body. I miss the better balance, the big grip, the simplified menus, the big tactile buttons and big pro-looks. Sony tweaked things towards ergonomic improvement on the A7R III but the elephant in the room is that the A7 series needs a complete overhaul to compete with Canon and Nikon. The bodies are just too cramped. When the A7 series launched it didn’t have anywhere near the competition it is about to have. This has flattered it, and in some ways Sony cameras remain very mediocre if you ignore the specs sheet. Now is the time to step up with some long-needed creativity on the usability side. Show some style, some imagination and new ergonomics. I’ll give you just one example of what’s needed – Get rid of the current menu system entirely, don’t just tweak it! Make the body larger, spread out the controls, bigger screen, meanwhile keeping it lightweight.

Sony’s biggest strength remains sensors and being first to launch exciting new technology ever year… but what I don’t understand is how Nikon are able to use the same fabrication technology and come out on top for image quality. You’d think there would be a ‘home advantage’ for the fab owner? Sony need to make sure they stay number 1 for image quality.

We don’t yet know what the system or mount is going to be called but we know the premium Panasonic camera will be full frame, to be announced this month. Let’s look back to the good-old GH1 and GH2 era on EOSHD. What else was there like it at the time? Nothing. As evidenced by the site name, I honestly expected Canon to dominate video with the 5D line and to keep developing that side – rather than branch it off into the Cinema EOS line which excluded so many. The GH1 and GH2 kept prices low and performance exponentially going up, to the point where EOSHD was practically a Panasonic site. We now have the GH5, with broad mainstream recognition as “the best” for video. The strategy succeeded. What they have lacked is the same broad recognition for photography. I’ll tell you why. Back in the GH1 day they didn’t have a $3000 full frame version of it for photographers. As a result the Lumix brand is a bit disassociated. Ah well, better late than never! With full frame Panasonic can FINALLY make that claim for stills as well as video, at the same time as having the least compromises for filmmaking. They needed to take the fight to Sony. No matter how good a Micro Four Thirds camera is – and they are VERY good – people will think twice about spending nearly $2000 on one when they can get an EOS R, Z6 or A7 III for the same price. It’s great news that Panasonic have finally agreed to go full frame given how invested Panasonic are in Micro Four Thirds. It’s a big brave, bold move. Nobody else is really being as brave and creative.

Just imagine… a Leica SL style camera with the latest sensor technology. A lighter body, closer to a G9 or GH5. Add to that full frame 10bit video and the packed features-list of the GH5 / G9 and we have a winner. Very important, is that this hypothetical camera has autofocus and lenses as good as the Canon system. That will be hard work, but 100% necessary in the eyes of photographers. For videographers, a full frame GH5 will be enough, thank you very much. I’ll take 10!