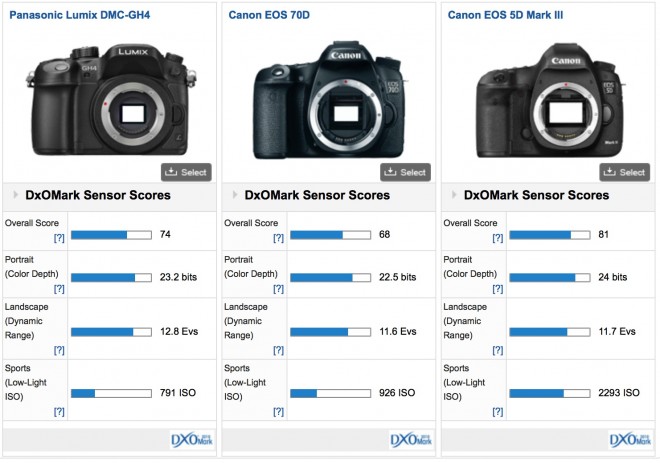 DXOMark have tested the raw sensor output of the GH4. Raw stills have 12.8 stop dynamic range vs 11.7 stops on the 5D Mark III, illustrating just how far ahead almost everyone is on sensor performance over Canon.

The GH4 stills show a marked improvement for a Panasonic sensor. The lowest noise of any Micro Four Thirds sensor and the greatest dynamic range.

With AF performance that in many respects beats a Nikon D4S especially in low light, you have a very underrated stills camera.

Not all of the 13 stops dynamic range translates into 4K video mode but a lot more of it is there than on the GH3 due to the full pixel readout.

Some more measurements (of raw stills)… 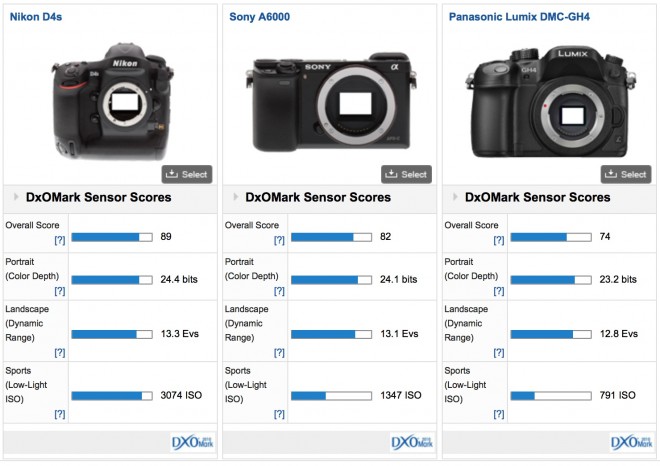 My own tests show usable dynamic range on the GH4 in 4K as being roughly equal to the 11 stops I get from raw video on the 5D Mark III. Very impressive for a compressed codec.

However dynamic range improves to around 12 stops on the 10bit HDMI output as does colour depth. There the camera delivers some of the best HD footage on the market, because of a hardware scaler to 1080p in 4K mode. This is similar to the 1D C which does very good 1080p over HDMI when set to 4K in-camera. Instead of pixel binning, the sensor readout is sampled at 1:1 for 4K, then downscaled over the HDMI output to very high quality 1080p.

Does the dynamic range measured by DXOMark have a measurable impact on everyday situations? I have actually just replaced my 5D Mark III for some stills work until the situation with dynamic range improves at Canon. I find when shooting ultra wide angle landscapes in daylight where there’s an enormous variation in light levels across a large section of space, I sorely missed the extra 2 stops of the full frame Sony sensors. I’m now using a Nikon D600 when I need the extra dynamic range along with the brilliant Nikon 14mm F2.8 AF ED as my ultra wide lens. This is £500 on the used market compared to £1300 for the Canon equivalent. 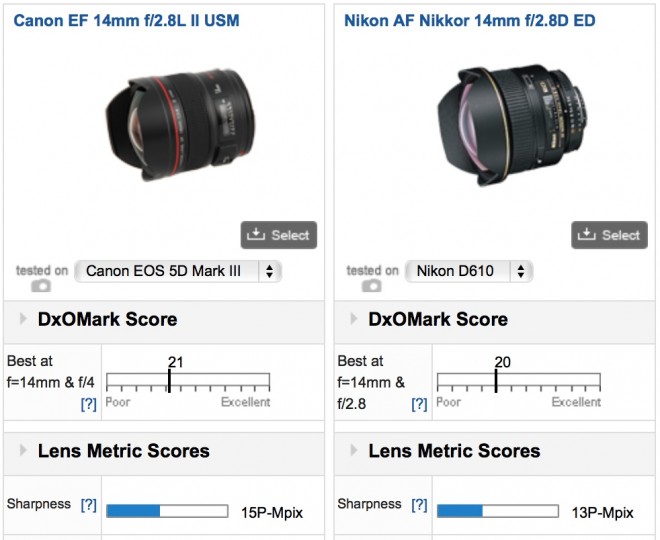 The Nikon D600 has tumbled to £850 on the used market in the UK, where buyers have been scared off it by the dust and oil issue with the shutter on early models. The camera represents a bit of a bargain at that price because it’s identical to the D610 and the shutter problem is a virtual non-issue with most of the units… Nikon have offered to replace the shutter on faulty cameras regardless of warranty status.

For video of course the 5D Mark III has the option of raw with Magic Lantern and far less moire / aliasing but for stills the D600 is perfect.

I love my Canon equipment but the performance of their gear in 2014 is really starting to look dated compared to the competition. I think it is time to expedite the development of a 5D Mark IV, 6D Mark II and 7D Mark II – all with 4K video as standard.

See the results at DXOMark and do your own comparisons here