The Sony FS5 has had a largely warm welcome from the video community but there has been one thing bugging a lot of owners and potential buyers alike – the quality of the internal codec.

Just how good or bad is it? 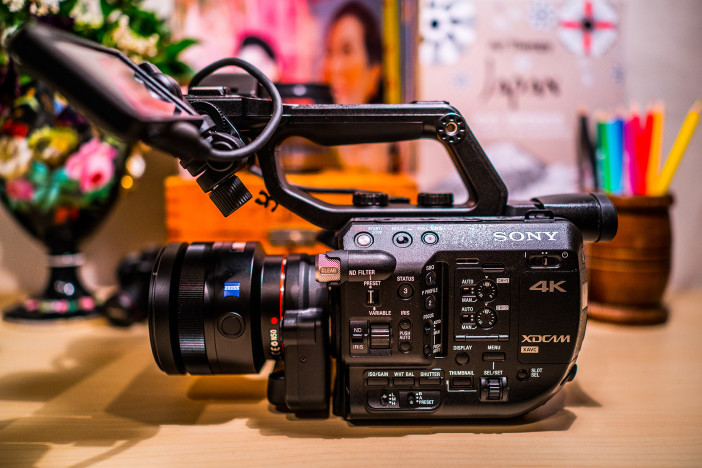 The Sony FS5 has heavy compression banding and blocking in 10bit full HD, which renders the 10bit recording mode a rather pointless endeavour (goodbye nuanced gradients). It also has a non-codec related problem in the 4K image pipeline (this issue appears to be a bug, depending on what picture profile and ISO is selected).

This camera has a lot of potential, but like with the firmware update for simultaneous monitoring whilst recording 4K internally, Sony will need to move swiftly to prevent further firmware issues severely limiting the appeal of this camera.

One of the key selling points and something all of Sony’s marketing material for the camera mentions is the internal 10bit 4:2:2 1080p.

Unfortunately this is the worst implemented 10bit image I’ve ever seen. 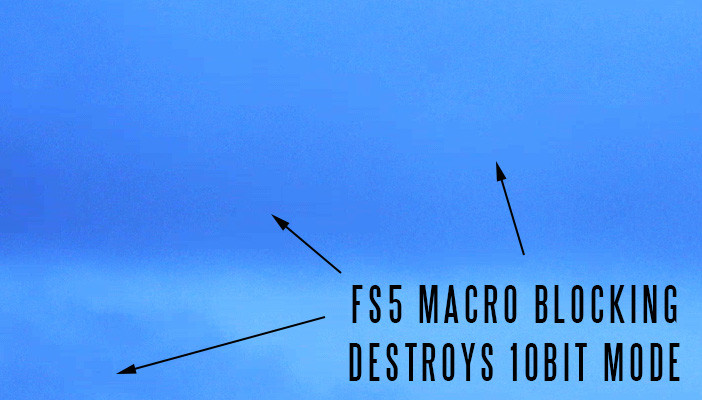 Any smooth gradation disappears in a cloud of macro blocking and compression.

It’s worse in 1080p 10bit than in 4K 8bit where the macro blocking is more sporadic, shown below: 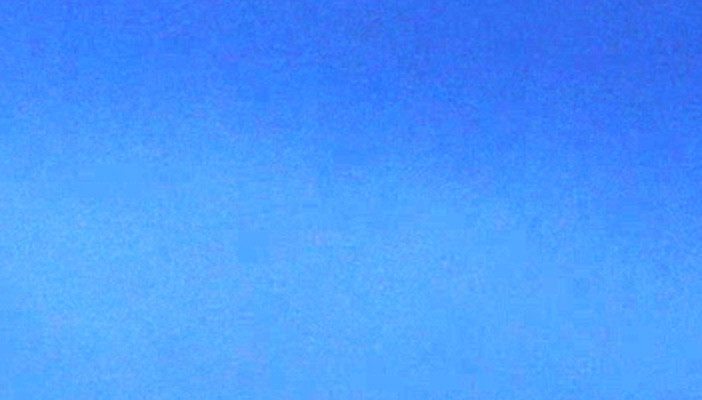 Whilst the Sony FS7 in ProRes will give you true 10bit (without banding problems in skies for instance) the FS5’s 10bit mode doesn’t look any better than 8bit AVCHD on the 5 year old FS100.

That’s because the 10bit codec of the FS5 is too stressed. The more frames you pack in (e.g 60p) the more colour information you pack in (4:2:2) and the higher the colour depth (10bit) the larger file you need to store it all in! The data rate has to go up.

Sadly at just 50Mbit/s the XAVC-L implementation in the FS5 is not enough to deliver smooth gradation or the “nuanced tones” Sony claim to be selling us with the 10bit mode. The 10bit mode shows heavy macro blocking and banding especially in S-LOG 3, offers no image quality advantage over the 8bit 4K mode and occasionally shows other artefacts such as black and magenta pixels around high contrast lines. The macro blocking destroys any smooth gradation between gently varying shades of different luminosity.

Consider the 4K 8bit mode instead even if you’re delivering 1080p.

The current firmware appears to have a bug where macro blocking gets out of control, particularly around horizontal edges causing them to disintegrate when the image changes (i.e. when the camera is moved or the edge goes into soft focus).

I have reproduced the bug on my camera in every picture profile.

It occurs on the LCD screen itself (easily noticeable in the zoomed focus assist) and appears on recordings done via an external recorder independent of the camera’s internal codec.

However some combinations of picture profile and ISO don’t show the problem.

Unfortunately I know of people’s paid work which have been ruined due to this FS5 firmware bug. How this escaped Sony’s quality assurance testing I will never know, likewise with the Sony A7S II black sun spot. This is the third camera I have this year from Sony which has had a serious image quality defect or bug upon release!

I’m disappointed with the performance of the 4K XAVC-L codec in Adobe Premiere CC 2015. The XAVC-S codec of the A7S II delivers the same quality in 8bit 4K 4:2:0 yet can be edited on a Macbook Pro without the need to transcode to ProRes in Edit Ready. The FS5’s XAVC-L codec seems to tax the CPU far more and I have had to resort to a transcoding step in Edit Ready to ProRes even on a high end system.

Sony seem to have made some adjustments to SLOG, presumably to match the sensor.

S-LOG 2 between the A7S II and A7R II delivers an identical result but S-LOG 2 and 3 on the A7S II compared to the FS5 will need a completely different LUT in post.

The blacks are far cleaner and not as crushed in S-LOG 2 on the A7S II. The black seems much lower on the FS5 by comparison.

S-LOG 3 on the A7S II is the flattest of all with a very high black level indeed.

S-LOG 2 on the FS5 is a bit easier to grade than on the A7S II because it doesn’t seem as flat. Another change is that the S-Gamut colour modes in both S-LOG 2 and 3 on the FS5 are linked to colour temperature and override the white balance setting of the camera. If using S-Gamut you cannot adjust the white balance on the dedicated B/A/Preset white balance switch or set it to auto, you have to dive into the picture profile menu instead. I find it preferable at the moment to set the colour mode for S-LOG to Cinema or Stills. Whether this workaround for convenience has a negative impact on performance I will be finding out in due course.

Whilst on the subject of the A7S II I find the magnified focus assist to be of higher quality on that camera in stills mode than it is in 4K mode on the FS5. Since the FS5 is a video orientated model, this is an area for improvement.

Problem 5 – Banding in S-LOG due to compression

Although there’s no such thing as a noiseless, super smooth gradient on any compressed codec, the FS5 is particularly poor in S-LOG 3 at rendering skies and painted walls, indeed any large area in the shot of a single colour with gentle gradients.

Since the A7S II also has the same problem especially in S-LOG 3, I am surprised to see it here on a $5600 pro camera to the same extent as a consumer stills camera.

Since S-LOG 2 isn’t as flat as 3, there’s more variation in tone over areas of similar luminosity, thus less banding with gentle gradients. Or rather the bands are there but not quite as large and not as joined up. There’s very little in the way of fine grain to dither the bands together though because the noise has turned into macro blocking. That’s due to the heavy compression of XAVC-L: 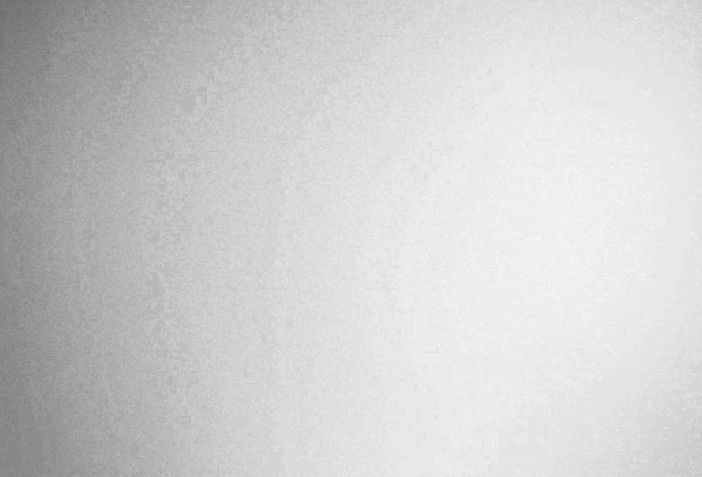 In S-LOG 3 the problem is aggravated due to the flatter curve. Here we can definitely see distinct bands and they will be more noticeable on the final video too. The codec hardly allocates any of the available 100Mbit data rate to areas with little detail so they suffer from too much compression. 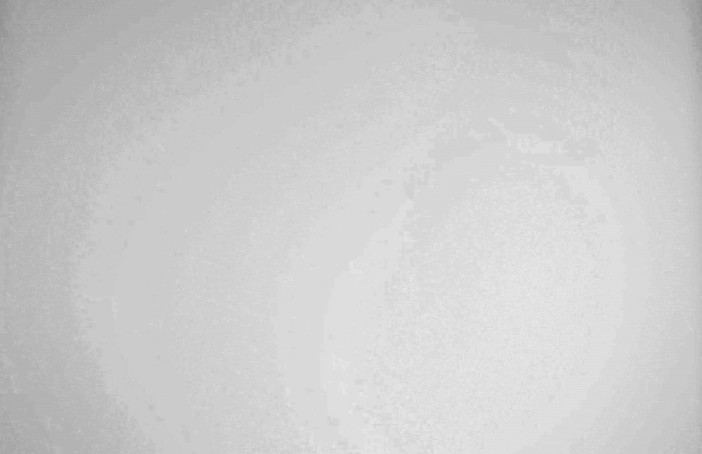 The Panasonic GH4 has a much noisier sensor but this helps with banding. Noise on the wall or in the sky creates detail which the codec keeps reasonably intact and the 4k 10bit output on that camera of course helps to an external recorder. It’s a shame there’s no 10bit 4K on the FS5 because Panasonic will give you that for $1400.

Test scene versus the others under the magnifying glass

I compared the same shot across multiple cameras to examine the quality of the sensor and codec on each.

It’s quite a basic shot so won’t stress the codec too much, or the dynamic range of the sensor.

But we can tell how the image does in post, when we grade each camera. Especially how each camera renders colour in the scene (although I have not yet done a skin tones test).

Click for the full 4K frame grabs (and drag to desktop) –

The Sony FS5 was graded to match the Canon as closely as possible:

With care I can succeed in grading the FS5’s 4K S-LOG 2 to match the 1D C’s Canon LOG. Both very good images overall, but the Sony has noisier reds and the Canon is softer. I’ve illustrated these differences below with 1:1 crops from the 4K. 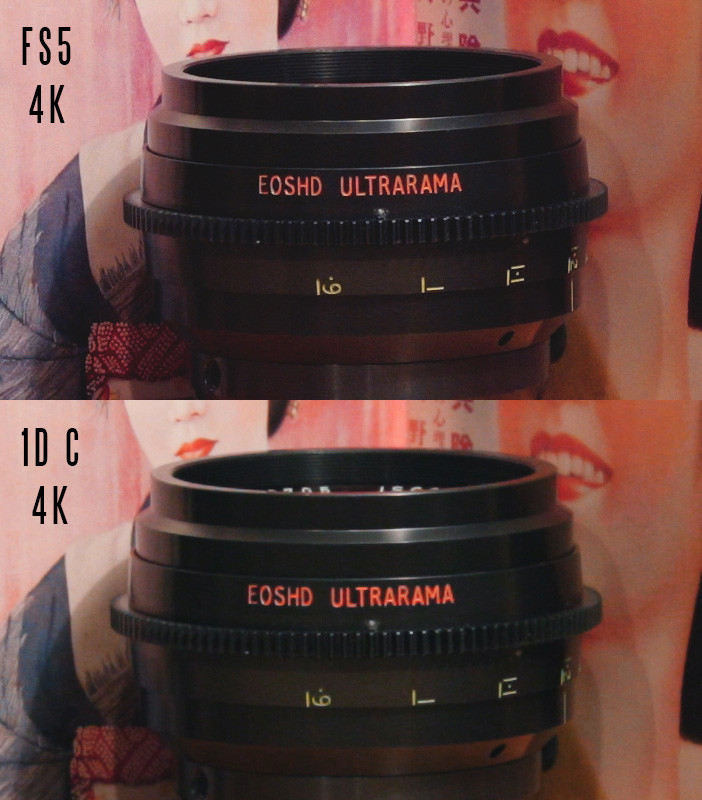 Nosier reds on the FS5: 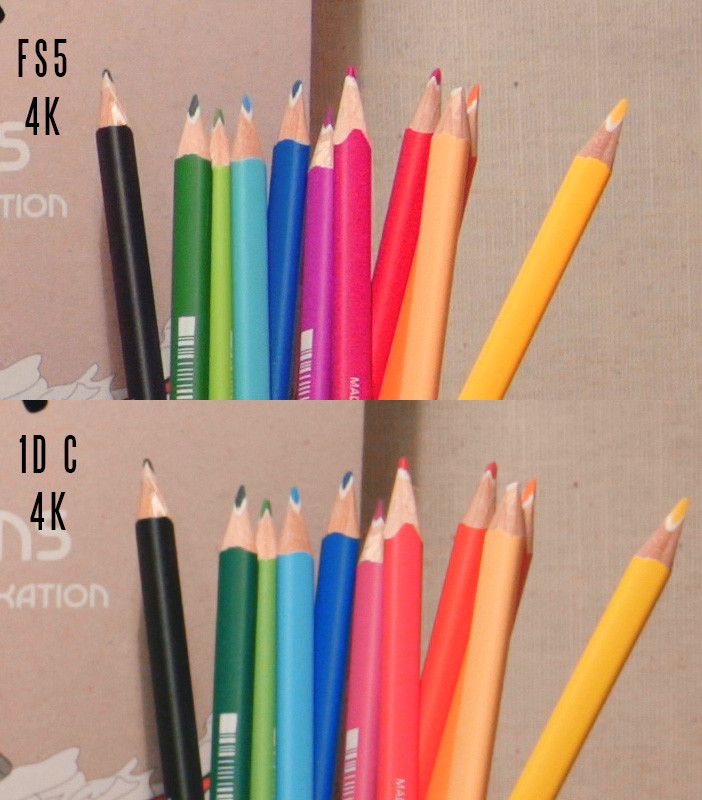 Out of the box Sony’s REC 709 colour is still displeasing, a rather clinical look (see video below).

The Samsung NX1 offers the best overall image quality for the price without the need to grade it. The Gamma DR profile does a nice job of un-crushing the blacks. The H.265 codec does macro-block in areas such as skies, but where there’s detail, it maintains an extremely high level of resolution with zero noise – 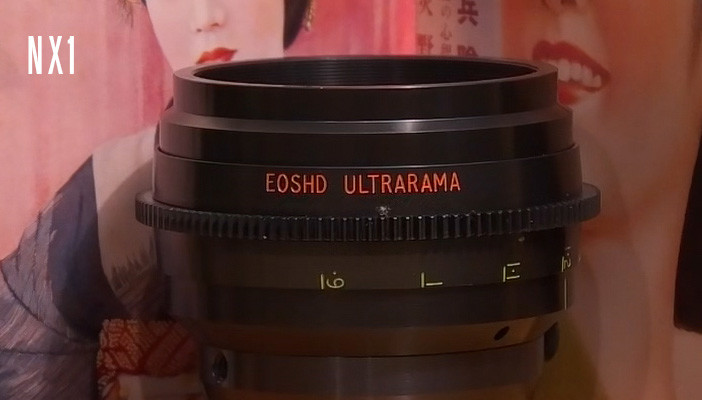 The Canon 1D C is great in a standard Canon picture profile and maintains a warm WYSIWYG look to interior 3200k scenes (but even better results are to be had with Canon LOG).

The Panasonic G7 is closest to the look of the Sony colour of the box.

Those are the problems – now let’s get things into perspective

I am really happy with everything else about this camera aside from the bugs and codec. I’m confident it’s going to be well supported by firmware upgrades as the FS7 has been. Whilst it is imperative Sony should fix the codec to avoid losing customers, the camera is still capable of a very high level of image quality and fantastic looking results in the right conditions.

The worry comes from using the FS5 as a B-camera to the FS7 or on a shoot with a lot of other cameras, as the codec just doesn’t match up to what is available elsewhere, not even to the 10bit ProRes available for under $1000 from Blackmagic. I think Sony would please a lot of people by giving FS5 users the option (if possible) to upgrade to the FS7 codec and ProRes. I don’t mind if this is paid. There are a lot of people who don’t want the bulk of the FS7 but don’t want a crippled codec on the same shoot as other Sony cameras. 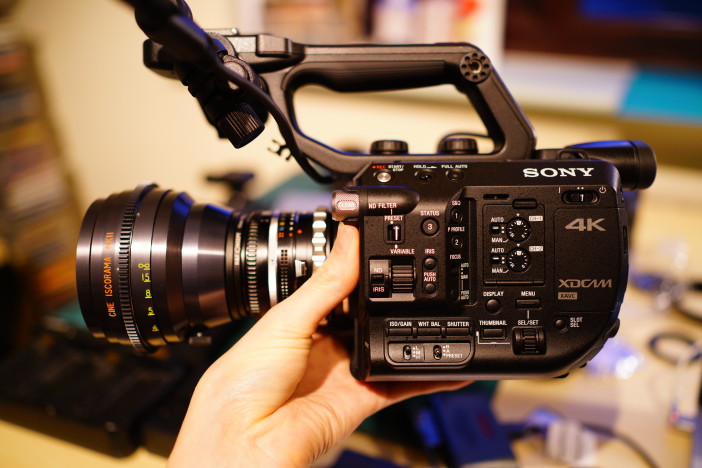 Also to pacify users who have suffered problems with the FS5’s codec I think the raw upgrade should arrive sooner rather than later and be very reasonably priced. If not then sales of the Canon C100 II and C300 II will continue to march off into the distance.

With any codec it’s important to look past headline specs (like bit depth and bit rate). How well a codec is implemented and the image processing often counts for more than the difference between 8bit and 10bit or 50Mbit or 100Mbit. The Canon C100 Mark II has a very weakly specced AVCHD codec but it is well implemented. These FS5 codec problems are obviously going to be an issue if a robust codec and glitch-free 4K recording are required. The Blackmagic URSA Mini 4.6K has a chance now to really run away with the 4K for $4k market on the strength of it’s codec.

Segmenting the market by codec makes little sense in 2015.

We have ended up with a situation where Sony have the same or better 4K codec on a consumer compact camera (RX100 IV) as they do on their $5600 PXW pro camera. We also have a situation where Blackmagic are offering 10bit ProRes for under $1000 with the Micro or Pocket Cinema Cameras. Meanwhile the Sony A7S II’s codec is less buggy and therefore slightly better performing, not to mention less CPU intensive in post – all on a $3k consumer stills camera! What a muddled mess.

Essentially it all boils down to the FS5 having a worse codec than a consumer camera at half its $5k price and that is unacceptable.

Finally, I have real concerns about Sony’s recent quality control. Sony risk destroying their reputation for reliability, especially versus the more bullet proof Canon Cinema EOS range. The Sony RX10 II back in summer had a focus problem. The Sony A7S II had a black hole in the sky where the sun should be. The RX1R II was meanwhile released and then mysteriously vanished. Is this the price we pay for a ‘rolling update’ firmware program and cameras that ship quickly? I hope not. However I am confident Sony will get a handle on the issues.