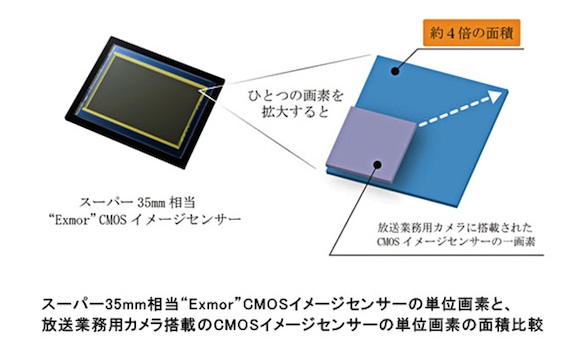 It appears the Sony F3’s sensor has a few tricks up it’s sleeve relative to the cheaper AF100.

Sony Japan say their Super 35mm Exmor CMOS in the upcoming F3 is completely new and has pixels which are 4x the size of typical DSLR CMOS ones. Approximately 12 microns sized versus as little as 3 microns on APS-C DSLRs (according to Sony).

The Canon 5D Mark II has a much larger sensor but 22MP. That one works out at 6.4 microns, so even against that beast the F3 comes out with twice the light capturing capabilities per pixel.

Capable of 1080/60p (although only 30p is available due to codec format restrictions) the chip relies on column-parallel ADC architecture and has a SNR (signal to noise ratio) of 63db. Hard to relate that back to real world performance especially relative to DSLRs but I will do more digging and see what I can find.

Sony’s digital cinema line is using CMOS for the first time with the F3, previous offerings have used CCD sensors.

Since this is a cinema camera, the sensor only has enough pixels for HD video, resulting in the following advantages over DSLRs:

The AF100 is using a sensor derived from stills cameras like the GH1 and GH2 and although Panasonic say the sensor is new I doubt it is a specially developed 2K digital cinema sensor like in the Sony. They’ve been closely guarded on it’s exact spec and that is probably down to keeping the Lumix origins quiet. Had a new sensor been developed the AF100 would be in the F3’s price territory and I am sure a new Panasonic cinema camera will come out aimed at the high end before long.

Japanese translated quote from Sony on the new cinema sensor:

“Still camera sensors are assumed to be stretched to print shooting data, more pixels are required. On the other hand, a sensor for video camcorders, in addition to resolution, sensitivity, dynamic range is more important characteristics, such as the number of pixels of video smoothness. The newly developed “Super 35mm equivalent” Exmor “CMOS image sensor”, while maintaining a sufficient number of pixels corresponding to the full high-definition, increasing by one more pixel area for each pixel, high sensitivity, low noise and, with improved video quality of the factors that determine the characteristics.”