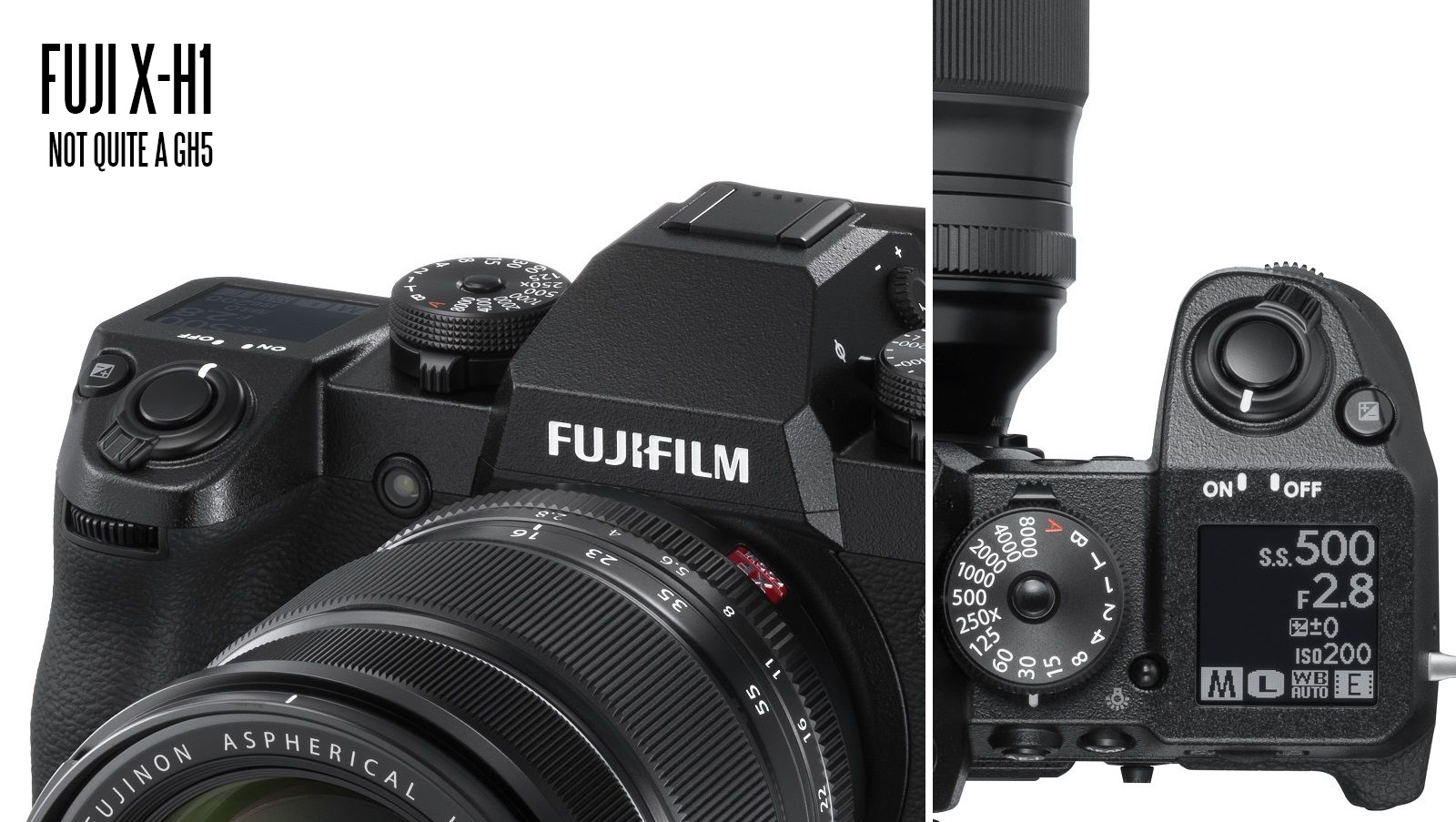 Fuji is stepping into the high-end video mirrorless market with the X-H1. The official press release and specs have been leaked (in German). With this camera comes a massively upgraded 4K codec, 5 axis IBIS and a total of 20 “functional and performance enhancements”.

A first for a Fuji camera, F-LOG with Rec.2020 colour is recorded internally direct to SD card and a new film simulation “ETERNA” is added to the mix. That’s said to be designed for post-production too, with “subtle colour and contrast”.

1080p now goes to 120fps for dramatic slow-motion effects. According to Fuji, autofocus is also improved over the X-T2 with more stable behaviour in low light, in video mode and AF-C mode. The body meanwhile mimics some aspects of the medium format GFX camera, such as the top panel LCD and a chunkier body design compared to previous X-series cameras… A token gesture, at least, if not a fully fledged copy.

The battery grip again acts as a power-boost that increases the maximum recording time in 4K to 30 minutes. It isn’t known how long the camera can record continuously in 4K without it. It concerns me a bit because even 30 minutes is itself quite short of the Panasonic and Sony competition.

Here are the full specs.

So, another option on the table.

As you can see, the camera isn’t quite up to the benchmark set by the Panasonic GH5, GH5S or Sony A7R III at least in terms of outright specs but it offers some things over the A6500 including Fuji’s film simulation colour science, a new LOG profile which may or may not be better than S-LOG / V-LOG, a better codec with a higher bitrate than Sony currently offers (but wait until the A7S III to find out how they answer that) and 5 axis IBIS for the first time on a Fuji body – which has a chance to be an upgrade from Sony or a downgrade from Panasonic depending on how it turns out. Add to that the rather ‘traditional’ ergonomics the company brings to the table and you have a reasonably compelling alternative to what we already have… and perhaps more importantly, a significant upgrade for video shooters over the X-T2 which was already quite popular and a range of superb X-mount lenses.

Fuji have been on a real push with video recently, even adding 4K to the X-Pro 2 with a firmware update, whereas Sony cannot even seem to bring S-LOG to the a9. Sony’s firmware endeavours have been very disappointing whereas Fuji, Panasonic and even Samsung gave us a LOT. I am very confused as to why the A9 goes without basic picture profiles yet packs a better 4K image in full frame mode than the A7R III which DOES have them! To Fuji’s credit I’ve never seen such a stills orientated camera (X-Pro 2) get such a video-orienated firmware update, and I never thought Fuji would be the first company in photographic history to add 4K to a 1080p camera through firmware… In fact if you had told me Fuji would beat Canon to making a GH5-rival, a few years ago I would have raised both eyebrows. Now, I’m only raising one. Fuji, you had my curiosity, now you have my attention, not just on the camera side but with some rather good X-mount cinema lenses as well.