On the Nikon Z7 how much difference does 10bit N-LOG make?

Is there a step up from the Canon EOS R when you record 10bit externally?

How does the Fuji X-T3 compare in F-LOG at 10bit internally?

All the questions and more I set out to answer here…

This is a real-world test.

The idea of the scene is to give a wide spread of brightness. The brightest area of the image is the synth lit by the Icelight 2 and the bulb in the left-side box. The darkest area is the C500 on the left and the Pink Floyd album cover in the box on the right. Pay attention to these areas of the frame. As a bonus feature, you can also see which camera delivers the most resolution on the chart in the centre of the shot.

Both 8bit and 10bit tested

For the cameras that don’t shoot 10bit internally, I took the fight outside! Onto an external recorder.

The Nikon Z7 and EOS R are only 10bit over HDMI and the Z7 only shoots N-LOG this way. Internally to XQD card you have to use the Flat profile. That’s despite XQD cards being capable of 500MB/s write speeds, enough for uncompressed 4K RAW. Nikon is an idiot.

For those cameras that don’t shoot 10bit at all (*cough* A7 III) I didn’t bother with the HDMI output. It rarely makes a meaningful difference in 8bit.

8bit seems low quality when you consider you can only have 256 steps of brightness in the image. Actually, 8bit can support a wide colour gamut of 16 million different colours.

If you are shooting with a standard picture profile straight out of camera – 8bit is enough. Other things matter more, like overall codec performance and compression.

I am finally getting my Blackmagic Pocket Cinema Camera 4K next week after finding one in stock in Berlin. It’s flying over to Manchester and I will put it into the future tests with the others.

The Blackmagic offers the strongest codec of the lot because of RAW.

But to hear some people talk about it – they get very excited. RAAAAAAAAAAAW!

RAW I think is well understood, as even the most basic photography gives people a lot of prior experience of JPEG vs RAW, but when it comes to the merits of 8bit and 10bit video there’s a LOT of confusion.

And it’s not surprising really because 10bit always seems to get hyped to death. Am I missing something? 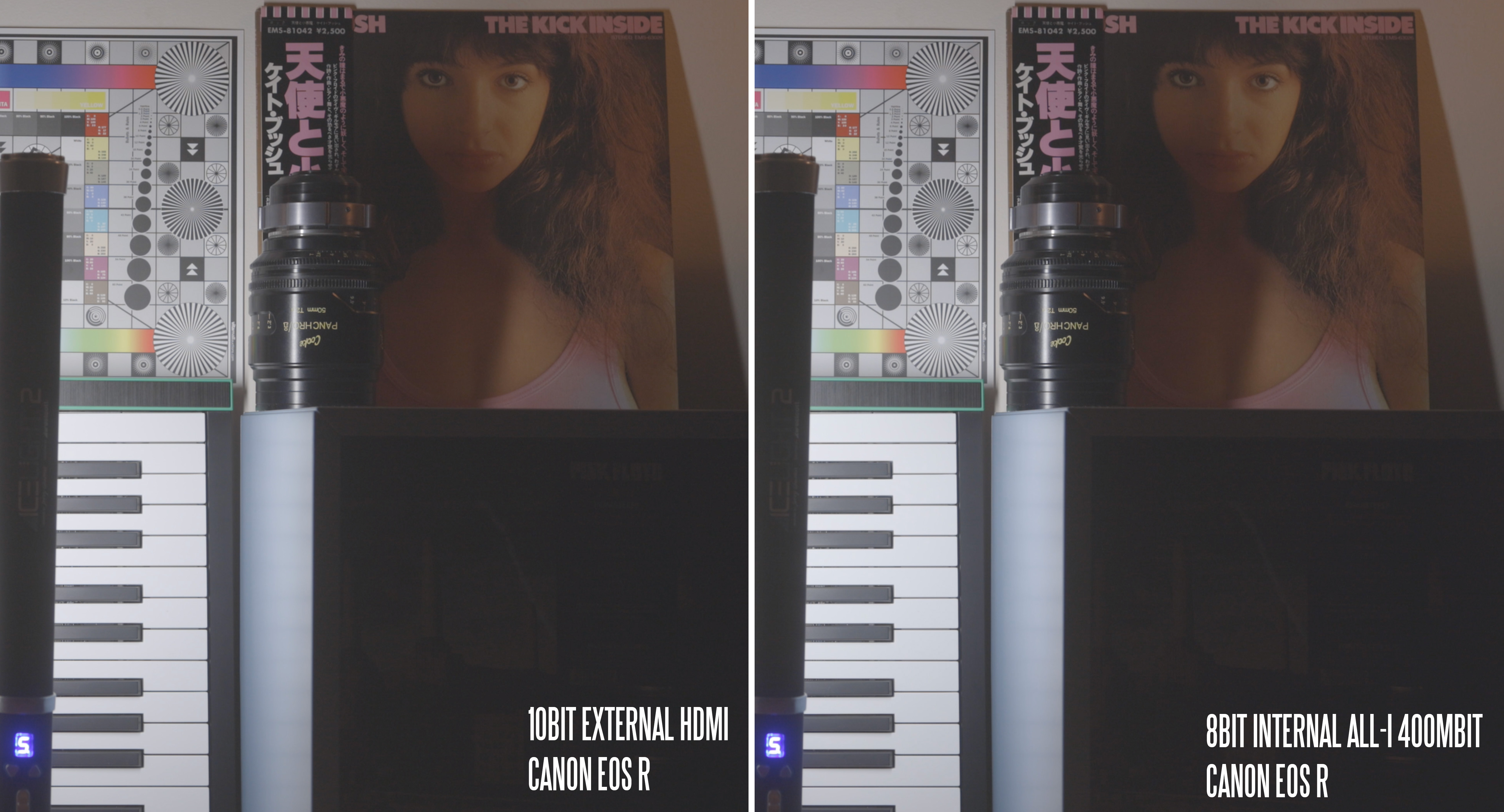 Let’s have an extreme example now…

8bit JPEG 16m colours vs GIF. In a GIF the ENTIRE PALETTE is just 256 colours instead of the 16 million an 8bit JPEG gives you. The photographic result doesn’t degrade by the margin implied by the numbers. Try it in Photoshop with a photo – you’ll be surprised how far that measly 256 colours get you (and that’s the entire gamut). It doesn’t look as good as a JPEG obviously – but it proves my point – can we really tell a significant difference between 16 million colours (8bit) and 1 billion (10bit)?

When shooting Hybrid LOG Gamma for an HDR display however, or doing a grade on LOG footage, 10bit will give you 1024 brightness-steps for each colour. This is helpful with LOG because LOG itself is a form of compression that squeezes a high dynamic range (high contrast between dark and bright areas) into a narrower range of contrast – to save file size. This gives LOG it’s trademark flat result.

In LOG two shades of similar brightness and colour are being squeezed closer and closer together. They can blend into one shade especially with heavy compression on top. 10bit can help to avoid that.

In 8bit LOG recordings you sometimes see false colour banding in an area like a blue sky which has a large spread of very similar shades of one colour. S-LOG 3 offers a good example of that.

Some of the less extreme LOG profiles like Canon LOG or even a “normal” Flat profiles work fine in 8bit. S-LOG 2 for example has less banding than S-lOG 3 in 8bit.

With RAW you’re manipulating the sensor data directly – you become the image processor. LOG tries to give you that freedom as well, but you are pulling around data that has already been processed and compressed into a smaller dynamic range.

The cameras in this test seem to take quite a varying approach to their 4K LOG images.

Some will start the blacks up around 16 or even 35 on the 8bit 256 RGB range. This tactic gives a creamy look to the files, preventing detail in the very darkest areas of the picture crushing to black and falling victim to heavier H.264 or H.265 compression down low. Codecs prioritise brighter and more detailed areas of the image.

This milky look to the lows also throws away a lot of junk noise that is of no use to anyone anyway.

Canon LOG, Panasonic V-LOG and Nikon N-LOG take this approach whereas the Fuji X-T3 in F-LOG and Sony A7 III in S-LOG 2 appear to let the shadows crush a bit more and there’s more noise down there. I prefer the Canon LOG approach, because you can’t pull out trash in the shadows – it is nice and smooth. There are other cameras which start the blacks where the mids should be yet still have a ton of shadow noise, like the Leica SL and these are completely crazy. Borderline broken, I would say. 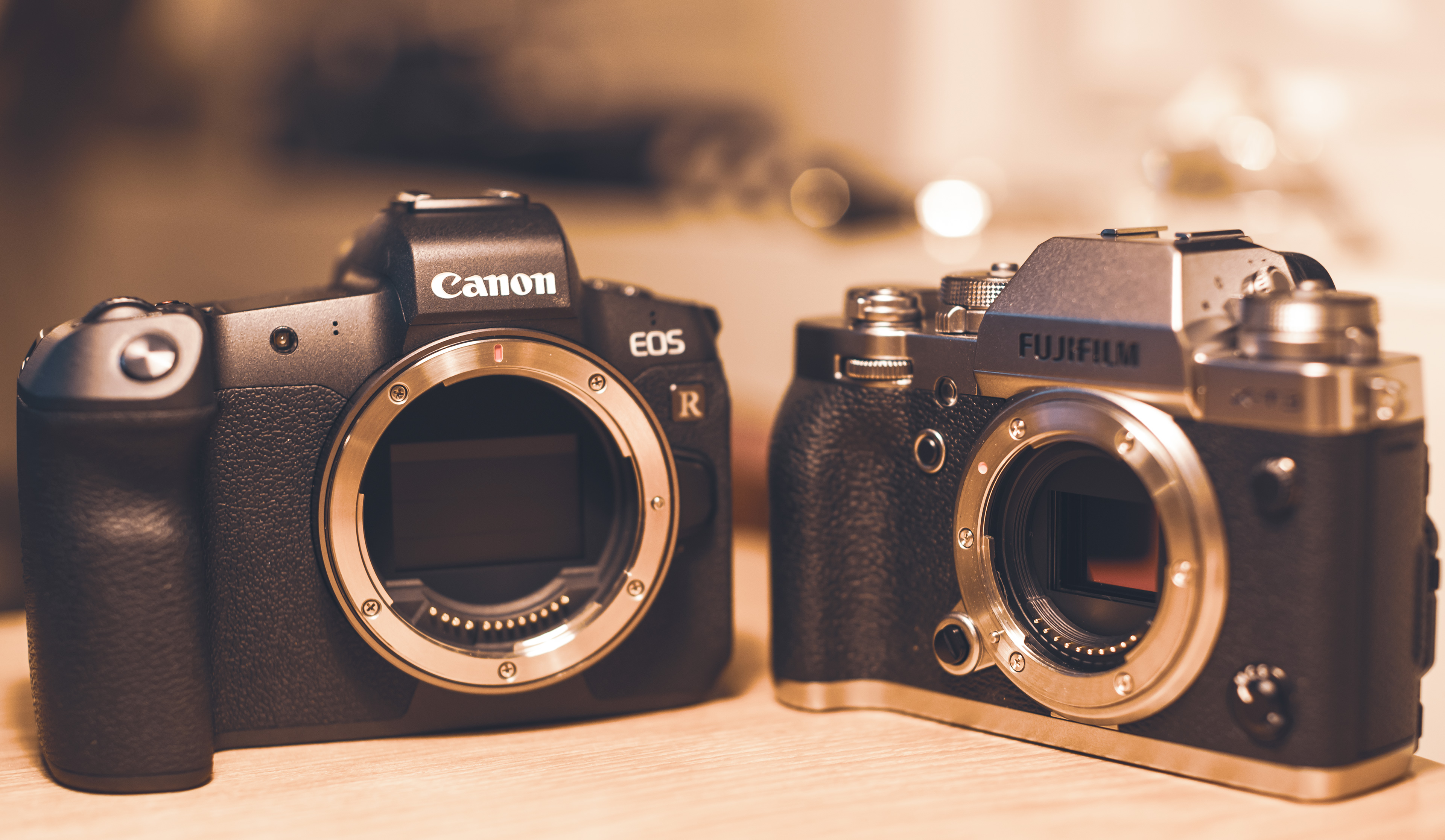 These tests can have a lot of variables. An image should be exposed as the camera sensor and LOG profile prefers. Finally, how’s your grading expertise? I decided to give you the images straight… No grading, otherwise this would end up being a review of Andrew Reid’s grading skills and not the real camera performance. For the record I am very good at grading and matching the look between different cameras!! 🙂 But this should not hide what the camera is doing in the original file.

You can download the original shootout file at a high bitrate from Vimeo (provided they don’t DMCA me) whilst it lasts. Feel free to grade it yourself and to pixel peep the shadows.

The highlights are an interesting area to look at on this test.

You can see the internal Nikon flat profile has quite a bit more contrast than real LOG… And less dynamic range, but it is easier to grade.

The test has three parts.

We’re going to look at all the visible dynamic range in each file.

The internal codecs were set to their highest quality offered by each model… they range quite a bit on the codec side from a mammoth 10bit ALL-I 400Mbit H265 on the X-T3 to just 8bit IPB 100Mbit on the Sony A7 III. Bitrate matters more than bit-depth as anyone who has shot 4K at a measly 60Mbit on a Mavic Pro will tell you. Then the type of compression also matters a lot – ALL-I with every frame stored individually or IPB where only key-frames are stored individual every X number of synthesised frames. This has an impact on the bitrate needed to support each frame (lower in IPB, while ALL-I needs to be higher to maintain image quality) and the motion cadence.

Finally yes bit-depth does matter a bit but usually I can’t tell the difference. On the Nikon Z7 they made sure we saw a difference. So whatever lobbying from the external recorder companies went on there, Nikon have shot themselves in the foot and they’d be wise to unlock *at the very least* 8bit N-LOG internally, because the Flat profile puts it last in the test for dynamic range.

This camera has to compete with a range of cameras that not just have internal 10bit codecs – they are less than half the price. The Fuji X-T3, Panasonic GH5, GH5S and Blackmagic Pocket Cinema Camera 4K.

The Canon EOS R rather more wisely does offer C-LOG internally but the 10bit is externally only – I failed to tell any difference in the image!

The Sony A7 III S-LOG 2 is pretty impressive. Colour-wise not so much, but dynamic range appears prioritised.

The X-T3 and GH5S are closest to S-LOG 2 in the overall look. I found no shortcoming with V-LOG on the GH5S at all by comparison, but with the X-T3 in DaVinci Resolve with H.265 I found the highlights to clip a bit sooner and the blacks crush more. Might be fixable… will need to test more.

The Canon EOS R also does well. I love the Canon LOG profile. Look what it does to Kate Bush 🙂

Much nicer there than S-LOG and F-LOG pre-grade. There just seems to be more information in there to bring out.

I’d give the highlight retention award to the A7 III…Yet the EOS R has the nicer overall result for me.

When pixel peeping the resolution of the EOS R file it falls short but it’s 4K so when viewed normally it will be more than enough detailed.

The Nikon Z7 is another one which keeps BT709 colour in the Flat profile so like Canon LOG it is easier to grade. The X-T3 and A7 III seem to compress a wider colour gamut into the file, which makes them harder to grade but very luminous colours (like neon blue lights) don’t clip as easily.

The Nikon Z7 Flat profile sadly gives away quite a lot of dynamic range to the others.

The Nikon Z7 N-LOG over HDMI gives you back some dynamic range – but in my opinion not enough to make the hassle worthwhile. I’d rather have Canon LOG internally. The Nikon Z7 seems to lock the exposure during 10bit HDMI recording (although not in HDMI standby mode) and it seemed a little buggy. At one point I noticed a shimmering and flickering in the blacks.

Where the Nikon Z7 comes up strong is giving us 4K with no crop and less rolling shutter than the EOS R. Also the detail levels are very good considering it is pixel binning from a 46 megapixel 8.2K sensor down to 4K, which is only 8 megapixels. Nikon have avoided any serious moire and the aliasing is only just visible when pixel peeping – in normal viewing situation it vanishes.

Really, I’d say all the cameras give VERY similar dynamic range when shooting in the real world. The end result in terms of colour and how easy it is to grade matters more for me, and that is the subject of another test.