yeah well if they could get into a dynamic range and color depth war that would be great thanks. can't wait to get my compressed 8k 4:2:0 8 bit image. so exciting. 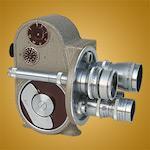 Maybe I should get back into selling diffusion filters . . . 'cause I don't know one actor/actress who wants to see their pores reproduced in 8K detail.

Man, I'll never be able to make my Magnum opus if I keep having to wait for these new cameras to come out.