5D RAW for large screen projection of a doc? 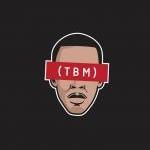