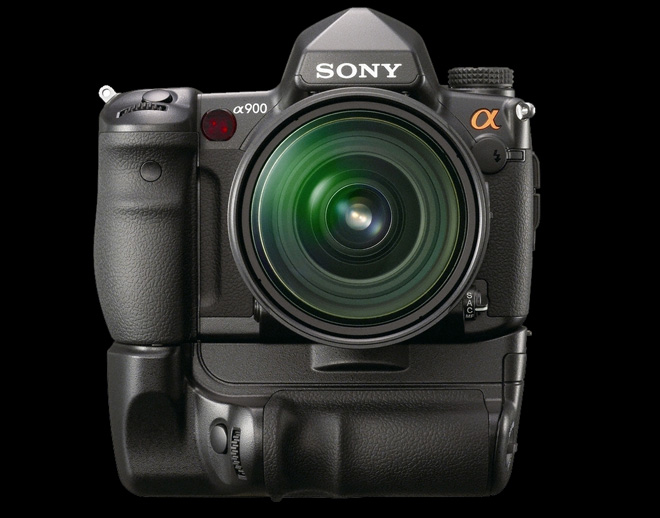 Above: Sony’s previous foray into full frame, the A900

With Canon this year failing to capitalise in my view, on their huge gains in the video market following the successful 5D Mark II, I have long wondered when one of the big 3 would get it right and give us what we need – a full frame DSLR with equal emphasis on pro video and stills.

My friend Sony Alpha Rumors, a blog so often the recipient of genuine information rates this news highly because it is from multiple trusted sources and I myself have heard whispers of Sony’s approach which match, so I don’t doubt it. Professional filmmakers and videographers were involved in the planning stages of the camera for 2 years. The A99 strategy is one of convergence and not only will the camera have the best possible video image quality but Sony are building a video infrastructure around the product to support it.

These developments are incredibly significant…

It has always been a real dream of mine to get a full frame camera that does perfect video, and I thought the 5D Mark III was going to be this camera. However due to the conservative and stills centred approach of Canon Japan this didn’t happen, and their filmmaking products were split off from the DSLR side to a new division, Cinema EOS, which has no product at time of writing under $15,000!

Canon’s strategy was to capitalise on the success of the 5D Mark II by making future products inaccessible to 99% of those people who made the 5D Mark II a best seller for video – enthusiasts, amateurs, aspiring filmmakers, indie production houses and freelancer photographers offering video as part of their business.

Now Sony already have an established cinema division and by no means is their Hollywood CineAlta support network, technology and customer base going to be effected by a full frame DSLR, however good it is. This is the smart way to plan their next DSLR and they’re not afraid to cannibalise sales of the FS100 either. Those who can afford the FS100 can also afford a 2nd camera and that camera will no longer be a Canon DSLR when the A99 is out.

Here’s what my friend Andrea at Sony Alpha Rumors had to say about the Sony A99 product planning from those involved in it:

“First, the A99 is a result of research made two years ago. Sony asked pro photographers and video makers how they should design the A99 in order to make it a successful camera. The main request was a camera that would have PRO video quality and support. It should outclass the 5D Mark II and the current 5D Mark III for that matter.

“Sony managers and engineers then decided to develop not only an A99 with pro video quality recording but a whole system that can support the camera.

“So what we will see soon is not just a camera, but a new kind of thinking hybrid still and video in one system. The camera is more mature than the A77. It is all about af speed, video quality, fast and high resolution EVF technology, well thought [through]accessories and clean image quality.

“The new hot shoe, the new flash light (with continuous LED light) the new battery grip are all newly developed with photography AND(!) film-making in mind. Maybe this will become the real first professional full frame hybrid camera that will bring us a step closer to the merging of the photo and video world.”

Sony’s camera division is in profit and its presence in the CMOS market at the moment is absolutely mammoth with Apple, Nikon and Olympus all using Sony’s sensors. So their people so far, you’d have to say, have done a good job. Now… most importantly for filmmakers, Sony’s smart approach to the A99 means we will finally get a video orientated full frame Vista Vision-like camera, for under $3000, with no serious defects or crippled featureset to protect some dedicated video cam. Moire on the 5D Mark II and Nikon D800, a soft image on the 5D Mark III and limited featureset, these cameras can safely be ignored for video now.

This is explosive stuff because it really does mean that all the current crop of DSLRs are yesterdays news for video apart from what I know is coming with the GH3 which is as incredible and daring as what Sony are doing with the A99.

It is great to see professional filmmakers involved so deeply in the planning stages of DSLRs by Sony and Panasonic and great to see recognition for what this blog is all about which is pushing video on DSLRs to be as best as it possibly can be. Though it has taken 2 years for it to happen plus a further 2 years for the products to be developed we are now off the ground and running, about to see the pro DSLR video scene flame ignite again and the convergence of pro stills and pro video is back on with a vengeance, as it should be!

Finally my advice is to wait 1 month until Photokina if you are looking to buy a current DSLR now for video.