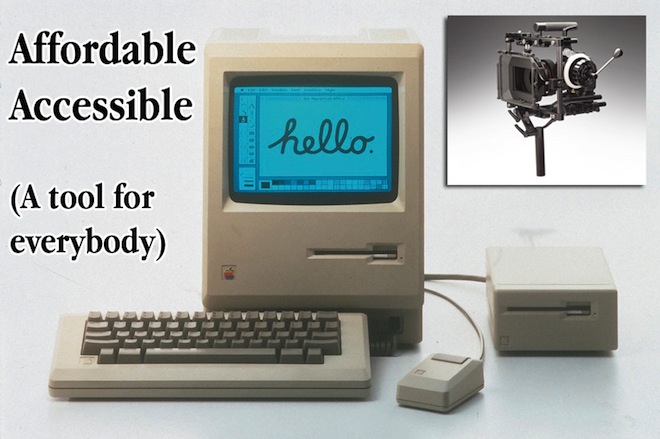 As some guy from Apple once said to a Pepsi CEO, do you want to sell sugared water for the rest of your life of change the world?

Sony are the industry standard, producing cinema cameras to suit the establishment, at a high price point. They are what IBM was to Apple in the 1980’s, and by the same token of that well known story, DSLRs are to Sony what Apple was to IBM. The hobbiest tool which became mainstream and ate into the establishment from the outside.

PCs are still around of course and they do their job in offices very well. By that token the Sony F3 is a great camera and it needs to be seen in the right perspective. There are times when a DSLR is not the right choice, you and I both know that but it needs stating clearly just as Sam Morgan Moore does so here. You may be a corporate shooter where shallow depth of field is a hindrance and moire can kill an entire interview segment. Obvious stuff – DSLRs aren’t for these jobs.

In areas of professional work where deep depth of field, a fast turn around and good auto-focus are must-have tools, DSLRs don’t cut it.

Also for professional cinema production and TV – the Sony F3, Arri Alexa and RED are squarely aimed at these productions. The DSLRs are not aimed at these guys although they can be used, have been used.

• It is not a website for mega-budget production studios who produce text-book advertising and corporate work
• It is not for people who make a living from a $50k video camera and equally priced flight case of Cooke cinema lens
• It is not aimed at people who run rental houses dealing in pro video cameras
• And there is nothing wrong with any of the above. It’s just not who we cater for here.

Why do you guys need to be interested in DSLRs? You don’t – they are a pain. They’d fall apart after a month, you couldn’t rent them out, they’d need so many work arounds you’d like like a crazy mad scientist in front of your posh clientele. Stay away from DSLRs.

Creativity exists in many different forms but on EOSHD I want to deal with creativity in the raw. That means being away from any commercial pressures or real world constraints. I want to strip down filmmaking to it’s core, just the minimal gear and let everything be about a good enough image, talent, ideas, acting, scripting, and (real world) setting.

For photographers making the jump into video, for film students trying to get noticed by virtue of talent, for filmmakers on a budget, freelancers trying to get on the ladder of a career doing what they enjoy, the documentary team who needs to be discrete and travel light, for filmmakers who want more intimacy and directness of execution without all the bells and whistles this website is aimed at you.

From our perspective, the bloated complexity and expensive of professional industry standard cinema cameras are an unattainable and unnecessary white elephant.

That doesn’t mean to say they don’t have a use for some.

The Sony F3 is an expensive and practical tool for professional work. Sure you can be artistic on a Sony F3 just as you can run Photoshop on an office PC. But on pure artistic merit, the image is not by the same margin nicer as it is pricier.

These pro offerings do nothing for me. DSLRs, affordable software, the internet, even free tools like Twitter and WordPress – these are the technologies today which are truly bringing change to the world of image making. Because they’re accessible, affordable yet hugely powerful.

UPDATE
The latest Critics episode is a great a reminder of what people are capable of when they have affordable yet powerful tools available. This is shot on a Canon T2i DSLR amongst others!