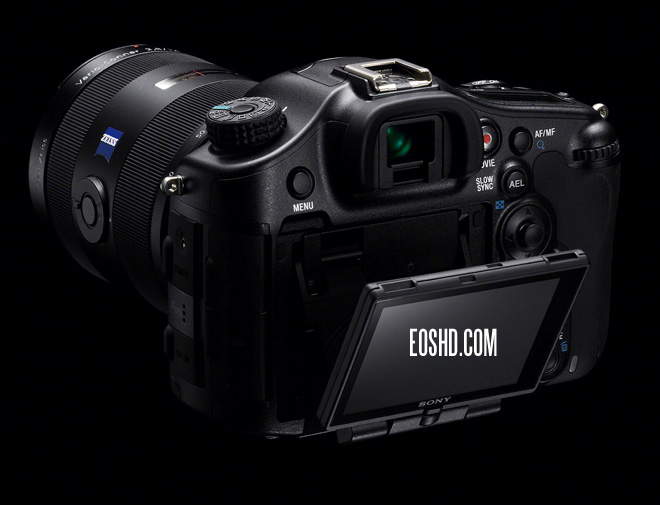 Sony seem to have worked hard in optimising the A99 for video, and not just stills only.

Point by point, EOSHD takes a first glance at the official information…

Sony say the A99 features an all-new ‘front end LSI, the BIONZ engine can process massive amounts of image signal data from the sensor at very high speeds’.

With a 24MP full frame sensor we can expect similar low light performance in video mode to the 5D Mark III.

For the first time ever, the A99 uses two sets of phase detect sensors. Some on the sensor itself and some above the SLT mirror. This should mean much more reliable AF tracking in video mode, and a smoother, more cinematic feel to this tracking.

On the audio side there are on-screen meters, a mic socket, headphone jack and even a XLR battery grip (XLR-K1M) for $800 which includes a shotgun mic. There’s a ‘silent’ control dial on the front of the camera. It isn’t a touch control though.

The codec is AVCHD 2.0 and for the first time we officially have 1080/60p on a full frame DSLR. 24p/25p are there too but no word on whether it is region switchable yet.

The EVF is the same TruFinder found on the A77 which is superb. The LCD however is new – a similar WhiteMagic panel as found on the Fuji X Pro 1 and Sony RX100.

The camera is very light for a full frame beast coming in at 733g, construction is magnesium alloy.

Interestingly the HDMI capabilities and card recording seem to be extensive. The press release hints towards the camera being able to output video to two cards simultaneously, as well as full HD to the HDMI port (which is fully live whilst recording). There’s no news on whether this is 4-2-2, uncompressed or clean yet – though I’m expecting it to be, like the Nikon D800.

There’s peaking for manual focus, and you can adjust all controls during a shot such as ISO, aperture, etc.

I have a flight to catch. More news in a few hours!