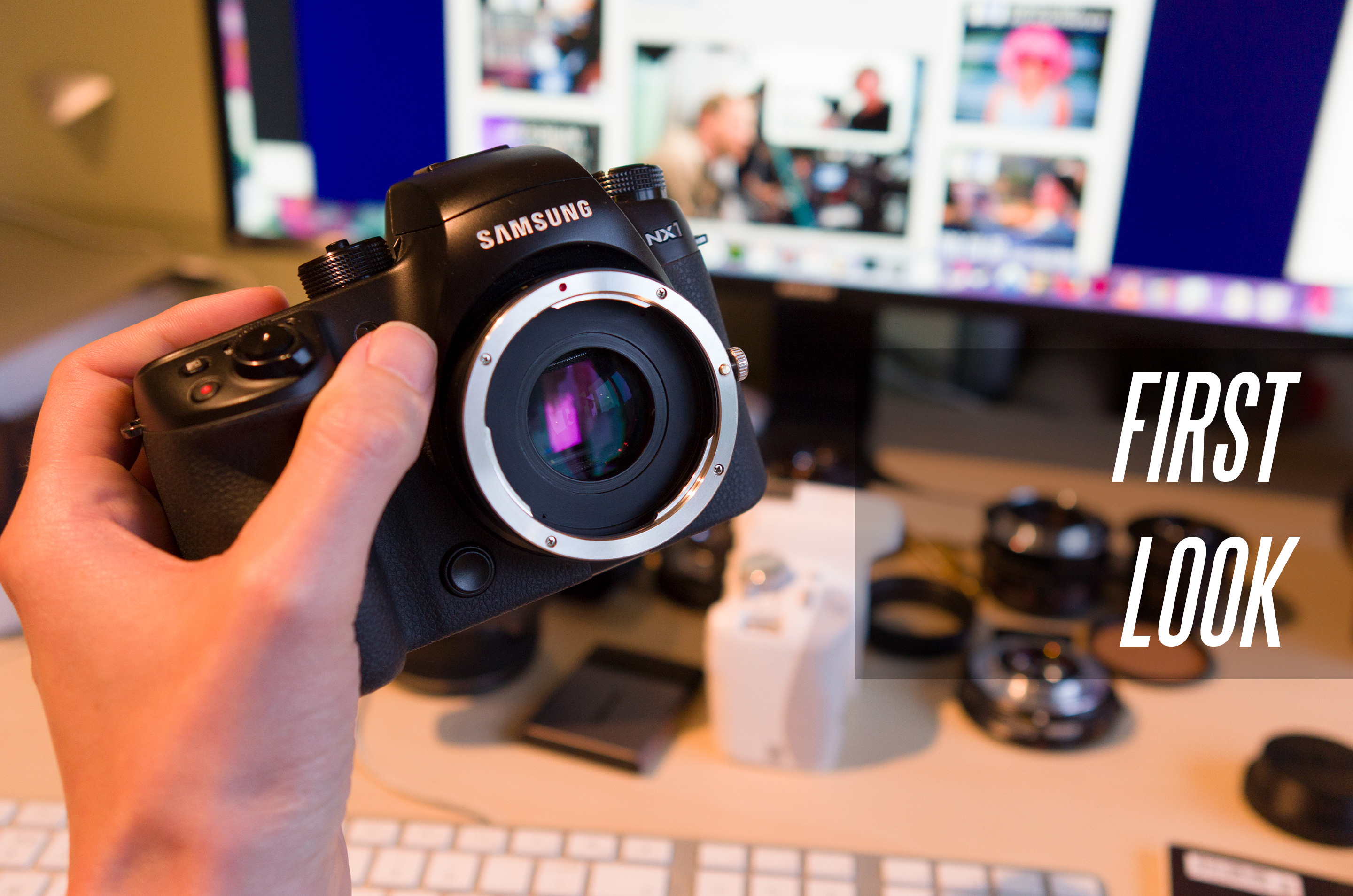 There’s now a Canon EF mount focal reducer for Samsung NX mount which gives the 4K H.265 shooting NX1 an extra 1 stop of low light performance and the full frame look (1.08x crop to be exact) from your EF lenses!

The NX-L is a crowd-funded product aiming to do for Samsung cameras what the Metabones Speed Booster does for Sony APS-C cameras.

My first impressions are that it is a good one.

It fits my NX1 and NX Galaxy (Android Super 35mm camera), is well built and optically superb. Here’s an idea of how sharp the 4K is with this adapter attached –

The NX-L is not just a NX1 adapter, it comes in very handy on the cheap 4K shooting NX500, which if I remember correctly did a pesky 2.3x crop in 4K mode – this will bring it back to a 1.6x crop, effectively Super 35mm, making it a great choice for APS-C Canon EF lenses like the highly rated Sigma 18-35mm F1.8.

Luca in Italy is also working on one with electronic contacts for full IS and aperture control, even autofocus in the future. But passive Canon EF mount is still very nice for several reasons. Most Canon EF lenses work in manual focus mode and quite a lot adapts – including manual focus Nikon AI-S lenses, M42, Contax Yashica, Olympus OM and Leica R to name but a few. All of these have manual aperture rings but sometimes it’s nice to just shoot wide open on a Canon lens, for example F0.86 on the NX1 to give it a low light boost that puts a Leica Noctilux in the shade 🙂 That’s what you get wide open with the Canon 50mm F1.2L – a 36mm F0.86 lens or the same look as the 50mm F1.2L on a 5D Mark IV in full frame stills mode (and one less reason to bother with the 1.7x crop 5D Mark IV 4K and those awful file sizes). 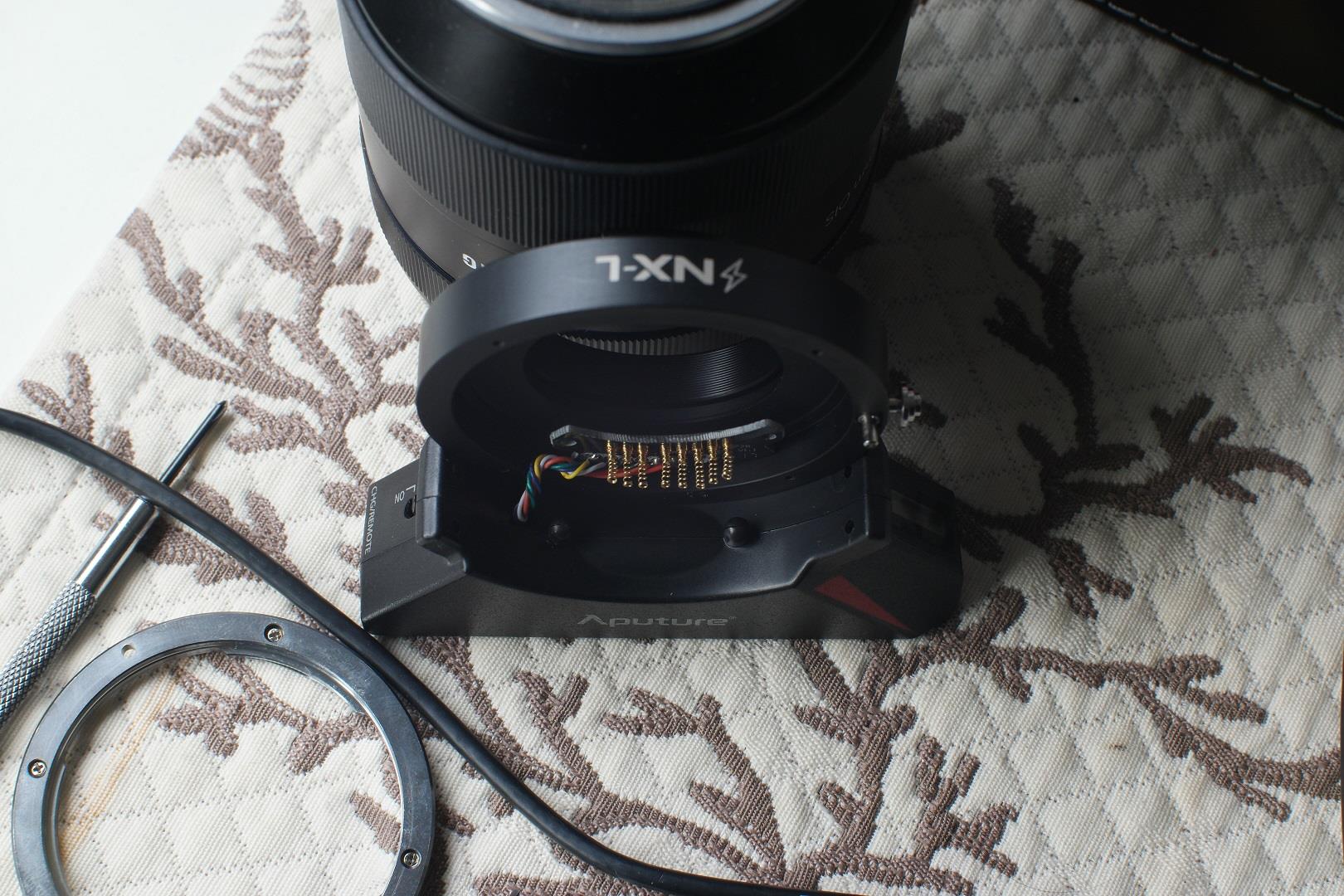 Above: Luca is working on a smart EF version of the NX-L, with modified Aputure control unit 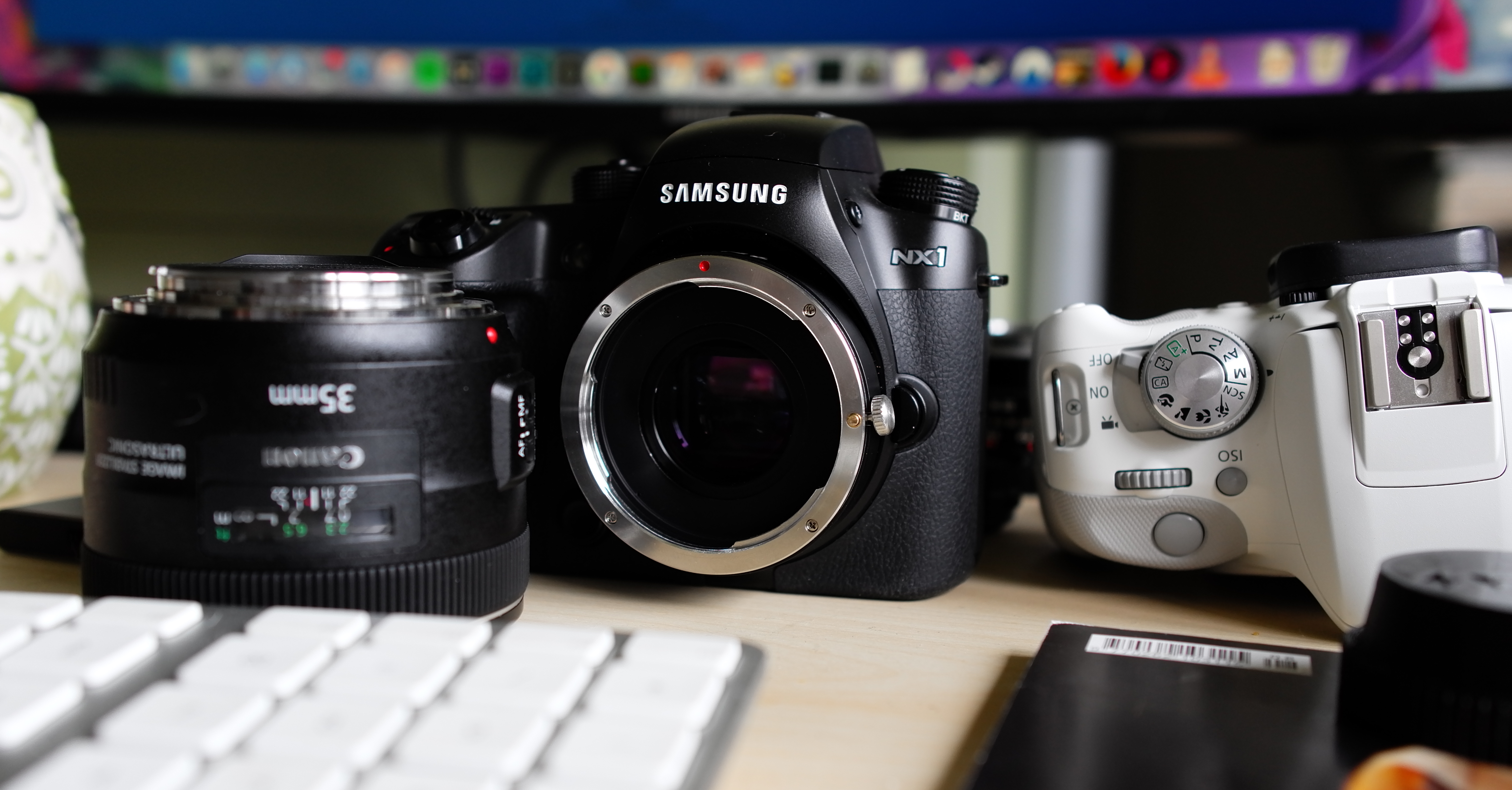 The Samsung NX1’s image more than holds up in 2017. I know, because I still shoot with it!! This camera has some serious legs.

Canon or Nikon have not beat it yet on a combination of factors – not least the fact it shoots H.265. The file sizes in 4K are very nice indeed. Colour is a particular strong point of the NX1 and NX500, as is the noiseless image up to ISO 800. The 1600 is perfectly usable. The NX-L’s 1 stop gain helps you to avoid 3200 (where the pixel-packed 28MP sensor tails off quite suddenly) in all but the most ridiculously dark situations. 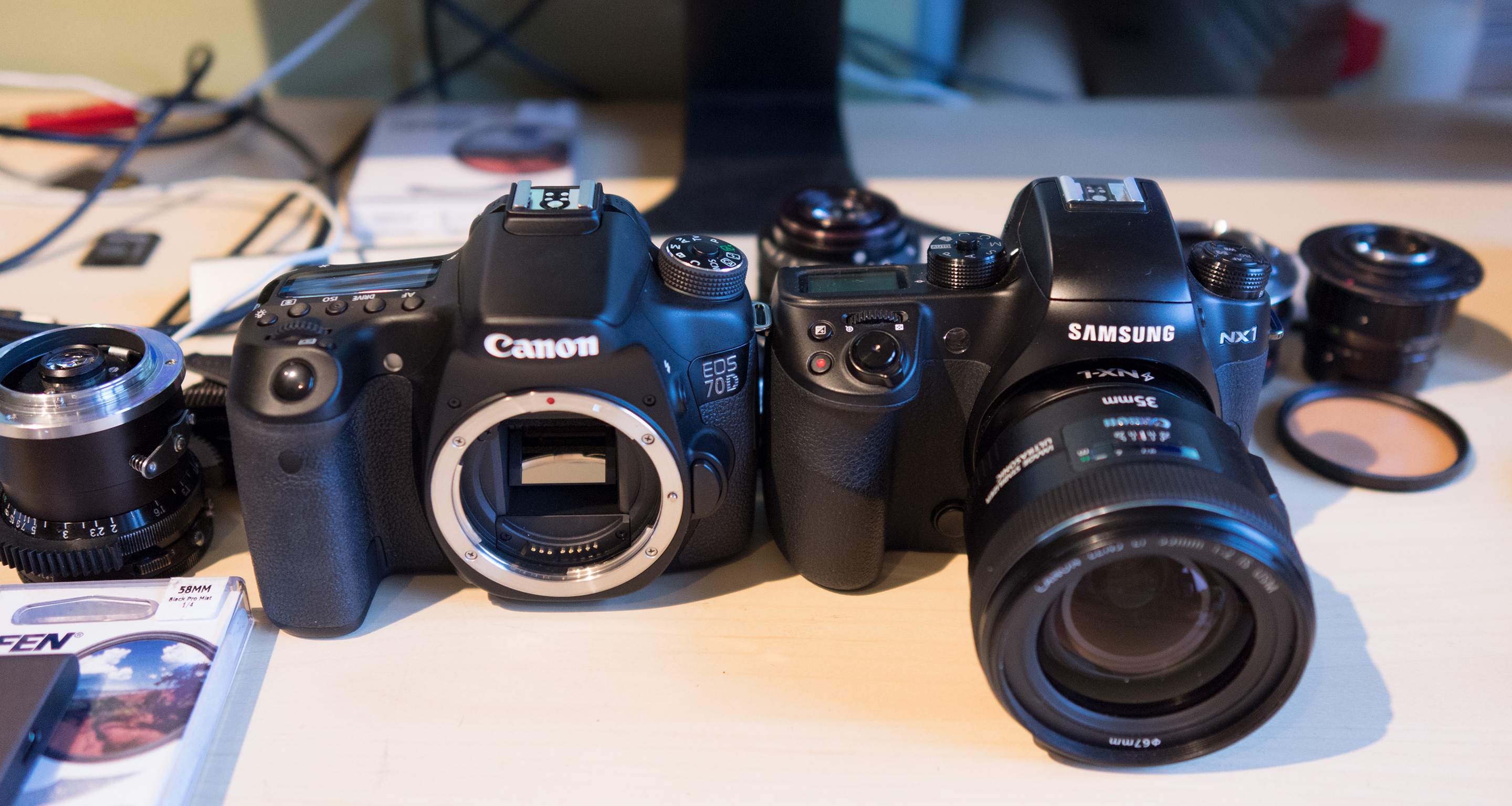 What’s also quite interesting about this adapter, and one other reason why it will be practically glued to my camera from now on, is the fact the NX1 does a very effective Warp Stabiliser in-camera that crops the field of view slightly. Before this gave a Micro Four Thirds look to the image but now it will give a 1D C, 1.3x crop look to the image so I won’t mind it as much.

The Samsung NX1 does not overheat, either! 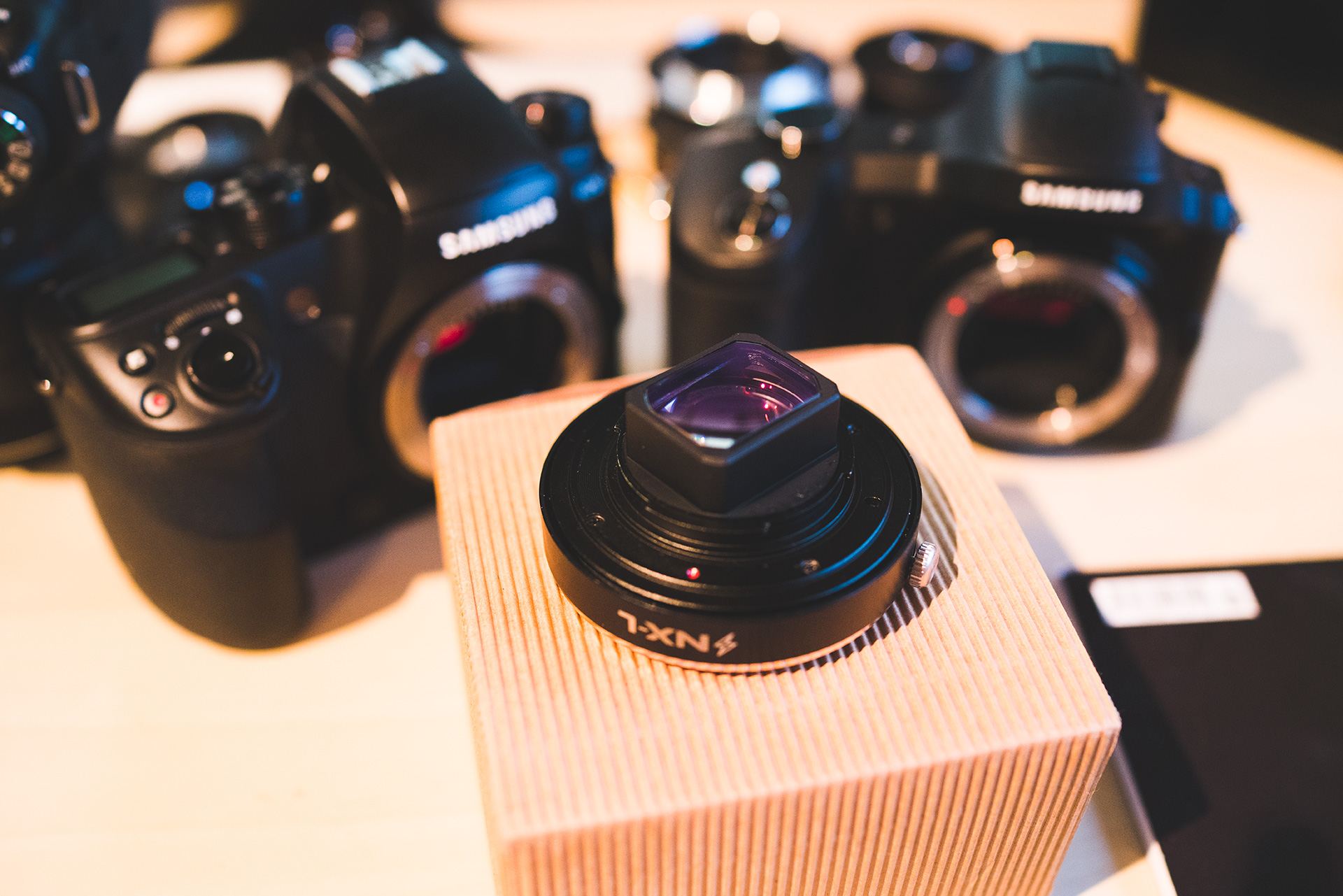 As the NX-L adapter is by an independent producer, crowd funded on an Italian website, there are not factories churning them out by the thousands, so the only problem is getting hold of one. It might be handy to keep an eye on eBay if any used ones come along and to follow Luca’s Facebook page for the NX-L here. If you back the project you may have to wait a while but it’s a great thing to do, directly helping Luca to make these adapters come to life. The electronic EF version is something I am positively chomping at the bit for having now got a taste of the optics and cinematic image.

By the way, one of the most important things to do with the NX1 is to set it to 16-235, +5 master pedestal and video gamma to Normal or GammaDR, as it stops the shadows from crushing and the highlights from clipping. The resulting dynamic range is a BIG improvement on the first firmware which didn’t have these options.

Keep an eye on EOSHD’s dedicated Samsung NX forum for the latest news on this adapter and the hacked firmware. There is still, happily, a very large user-base for these cameras, despite Samsung having gone back to making microwaves.

NX1 users are a very satisfied bunch… And I can see why!