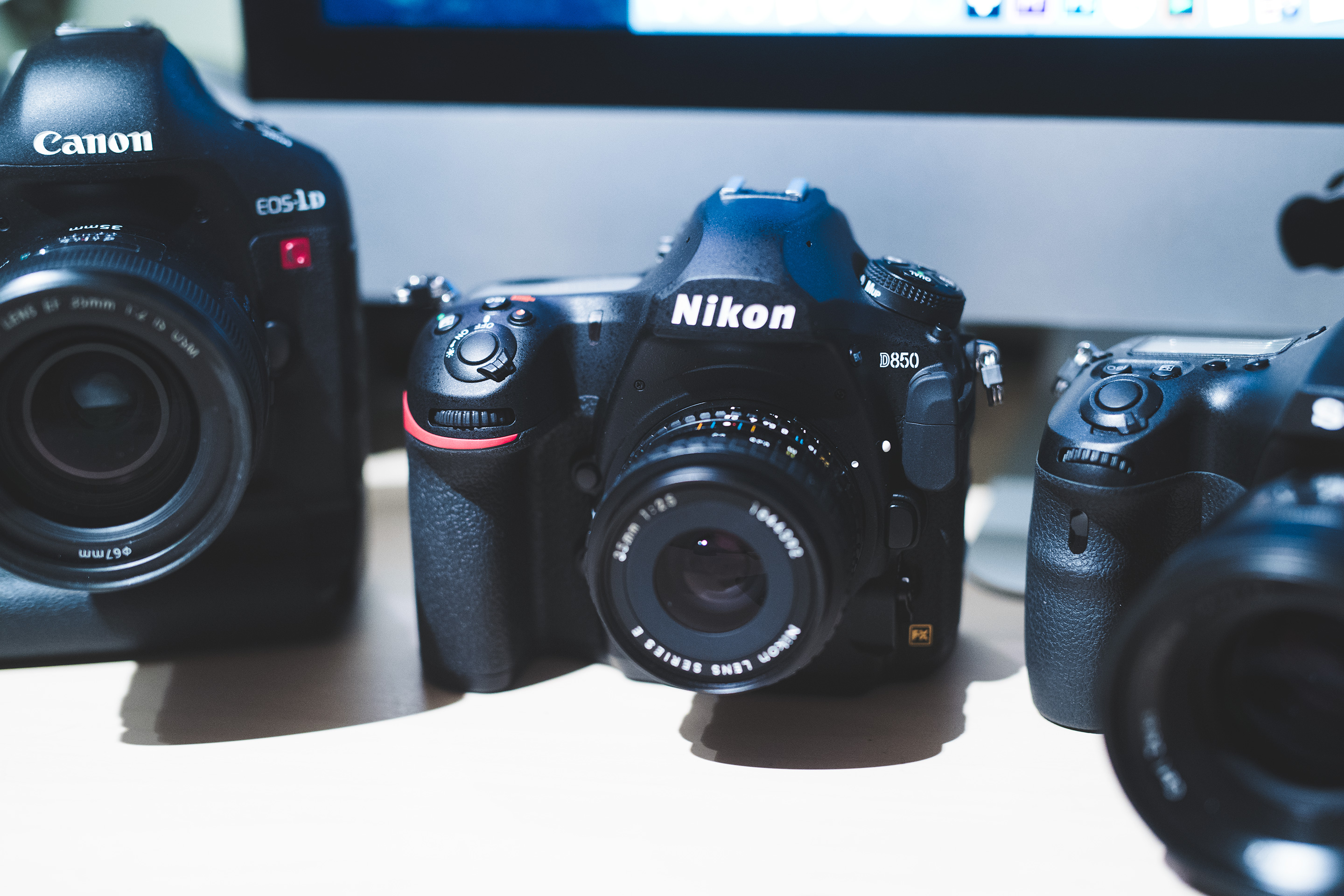 The D850 is a dinosaur but thankfully not a ridiculous feathered one. If this is the way DSLRs go extinct then they can go extinct with their heads held high.

The image quality in full frame 4K mode is truly incredible, the best I’ve yet seen from any DSLR since the Canon 1D C. I don’t know how it is even possible to do such a clean, detailed image from a 46MP sensor without a full pixel readout. Whatever the method, Nikon (or is it Sony) have delivered a real technical feat here. 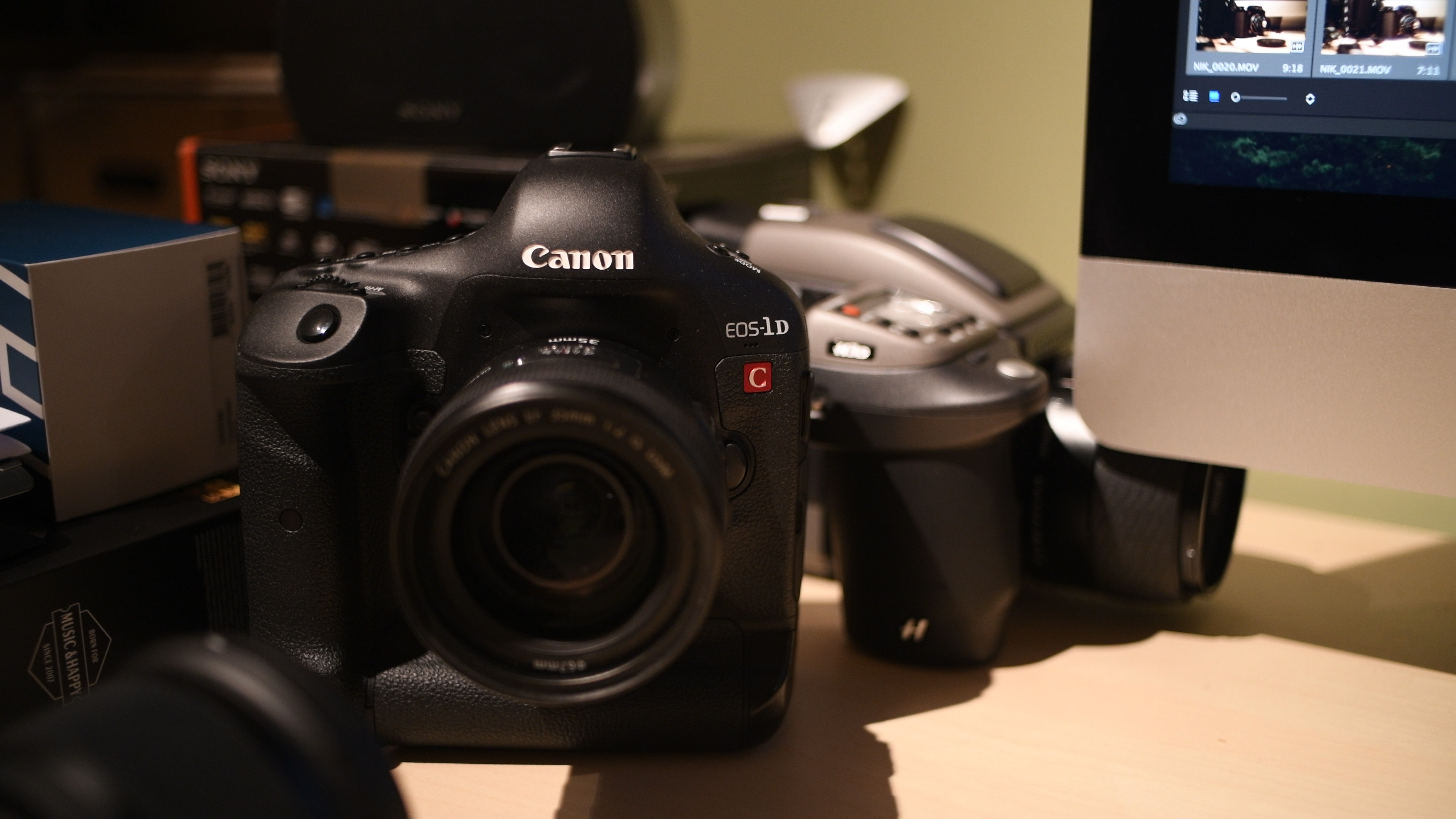 I’ve always loved my Canon 1D C for the no-fuss combination of cinematic 4K quality and pro stills capabilities, but not so much the lack of H.264 codec for 4K, no articulated screen and no support from Canon. Step forward the D850, the 1D C Mark II but by Canon’s rival.

Previously, the closest any Nikon has come to finding its way into my bag was the D750 which was a very good 1080p camera and a much better stills one.

Since the D750 my pants have been severely doused with very cold water and the D850 some 3 years later is the first one to set them on fire again.

I am genuinely excited about the D850 and will be using it for stills – a lot. But for video? Have I lost my mind?

The difference is, last time I didn’t really think the D750 or D810 put clear water between it and the Canon 5D Mark III for video…

This time, the D850 is WAY ahead of the Canon camp. 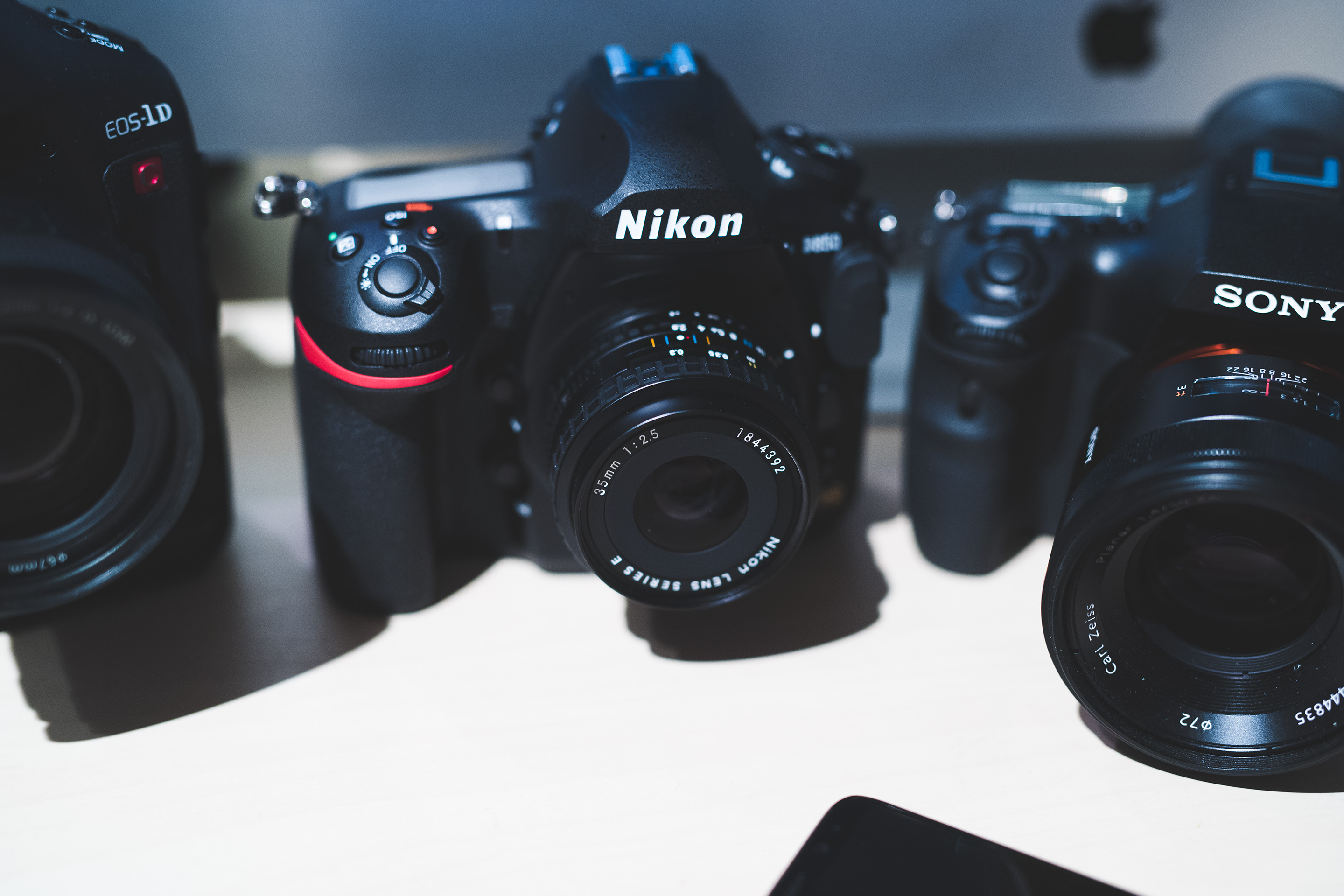 If you are predominantly a photographer, but need to shoot 4K clips at the same time with the full frame look, the D850 is going to serve you FAR better than any Canon DSLR to date.

Full frame 4K, no crop. The quality is amazing. It looks like an 8K full pixel readout downscaled on the image processor. It’s not of course but whatever the sensor is doing, it is doing something special. The quality of the 4K Super 35mm crop mode is identical to the full frame image! That’s ridiculous! Even in low light, they both deliver identically good results. On the Sony A7R II there was a massive difference between the full frame 4K (pixel binned) and the oversampled-from-5K-full-pixel-readout Super 35mm mode. On the Sony A99 II the difference was reduced quite a bit. On the D850, it’s eliminated.

Articulated screen with peaking? Check! And you don’t need me to remind you the 5D Mark IV lacks both!

But what does it lack? A few things…

It is lovely to grade and push around, along with giving very good dynamic range.

If you are happy with manual focus, on a tripod, monitoring off an extremely handy screen (super bright, super sharp) then the D850 will be nice ergonomically for you. You might not even miss 10bit because the codec is very very clean on the Nikon D850. The file sizes are very manageable, much more so than the 5D Mark IV in 4K MJPEG.

Now the Sony A99 II does have very good video autofocus, in-body 5 axis stabilisation and an EVF yet in a DSLR form factor, so is it flat out better than the D850?

Well, these are quite different cameras. 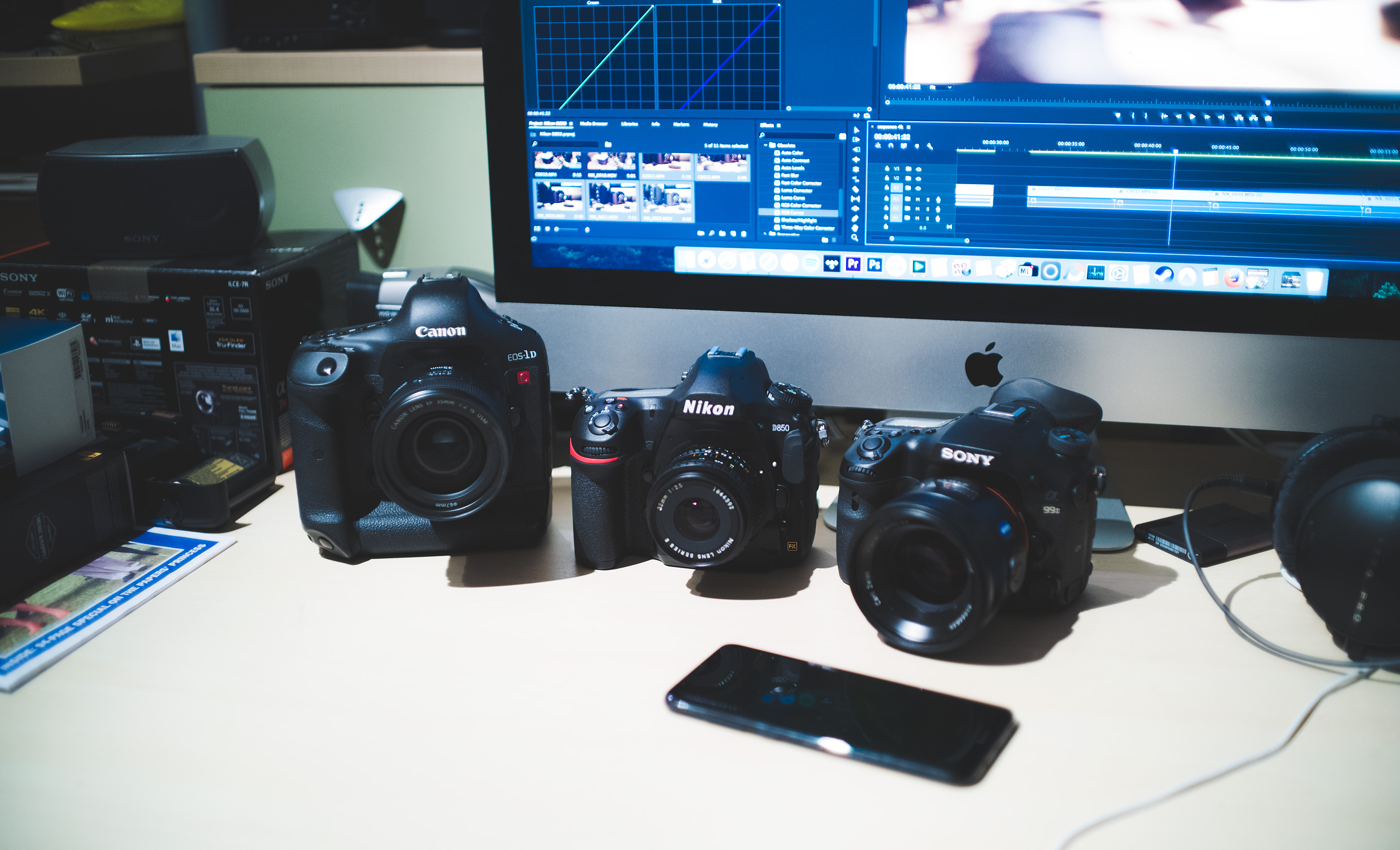 The A99 II I like very much. The D850 however gives you a HUGE optical viewfinder and D5-class autofocus with Nikon lenses – many would suggest it’s far better for stills. Personally, I don’t have any issues with the A-mount and Minolta lens range but the D850 makes sense if you are already invested up to your eyeballs in Nikon glass and AF is more reliable than on any Sony body.

In terms of build quality and design, the D850 chassis feels more professional than the A99 II which comes across a bit consumer-ish and at the same time the D850 is more tactile. The buttons and dials don’t have the cheaper feel of the A99 II. It’s a more responsive camera too. It’s faster to start up. The menus are better and less laggy. The top LCD is bigger, and also less laggy. How Sony managed to make an info LCD laggy is beyond me?!

The D850 is just a more mature design, it’s been evolving for longer.

Here’s an important thing the D850 does a LOT better than the A99 II… The main LCD on the D850 is far better than on any Sony camera I’ve used to date. It’s much brighter, sharper, much more legible in bright conditions, doesn’t go dim when you hit record and has the most spectacular quality focus punch-in assist… ever.

What Nikon should change in firmware

These are relatively minor things, but they are more stupid than a bright orange tangerine US president.

I identified all this stupid stuff over 10 minutes. The designers had years to avoid it. The testers had months to report it. And the reviewers and users now have to shout about it in public to get it changed. Well done Nikon!

I love – absolutely love – that you can press the joystick and turn the front dial to instantly toggle between FX and DX mode for video shooting.

I love that you can nudge the exposure compensation up and down in near silence on the front function-buttons near the grip.

I quite like that you can use auto-ISO in manual mode, although hardly earth-shattering.

I really like the design and overall style of the camera, it has far more personality than the Canon 5D Mark IV.

I really love the massive viewfinder for stills.

The silent electronic shutter for 46MP stills in live-view mode is a really cool thing for the first time on a Nikon DSLR, and it will save your shutter lifespan for 8K timelapse. In fact this is the best timelapse camera you can get, period.

I very much like the Nikon colour science and simplicity of the profiles.

I like that it takes practically 0 seconds to turn on and be ready to shoot a 46MP 8.2K photo. A bit longer for video though because you have to mash that live-view button first.

Nothing has yet beaten the Canon 1D C’s 4K on pure quality terms, although the GH5 has a better codec.

The Nikon D850 feels the most like the 1D C out of everything so far – similar LOG profile, the closest colour, full frame with no crop sensor (the 1D C is 1.3x crop, still nice).

The data rate of the codec is around the 150Mbit/s mark so higher than on the Sony cameras.

The detail level is similar to the Sony A99 II in full frame 4K mode with hardly any moire or aliasing. MUCH better than the A7R II full frame 4K.

I had no complaints over the full frame 4K from the A99 II. It’s early days with my D850 but I detect slightly less false colour than the A99 II, possibly even less noise and a more filmic rendering, indeed better colour at first impressions although EOSHD Pro Color 3.0 helps the A99 II A LOT. I’ll do a full comparison later.

Moire is practically a non-issue. 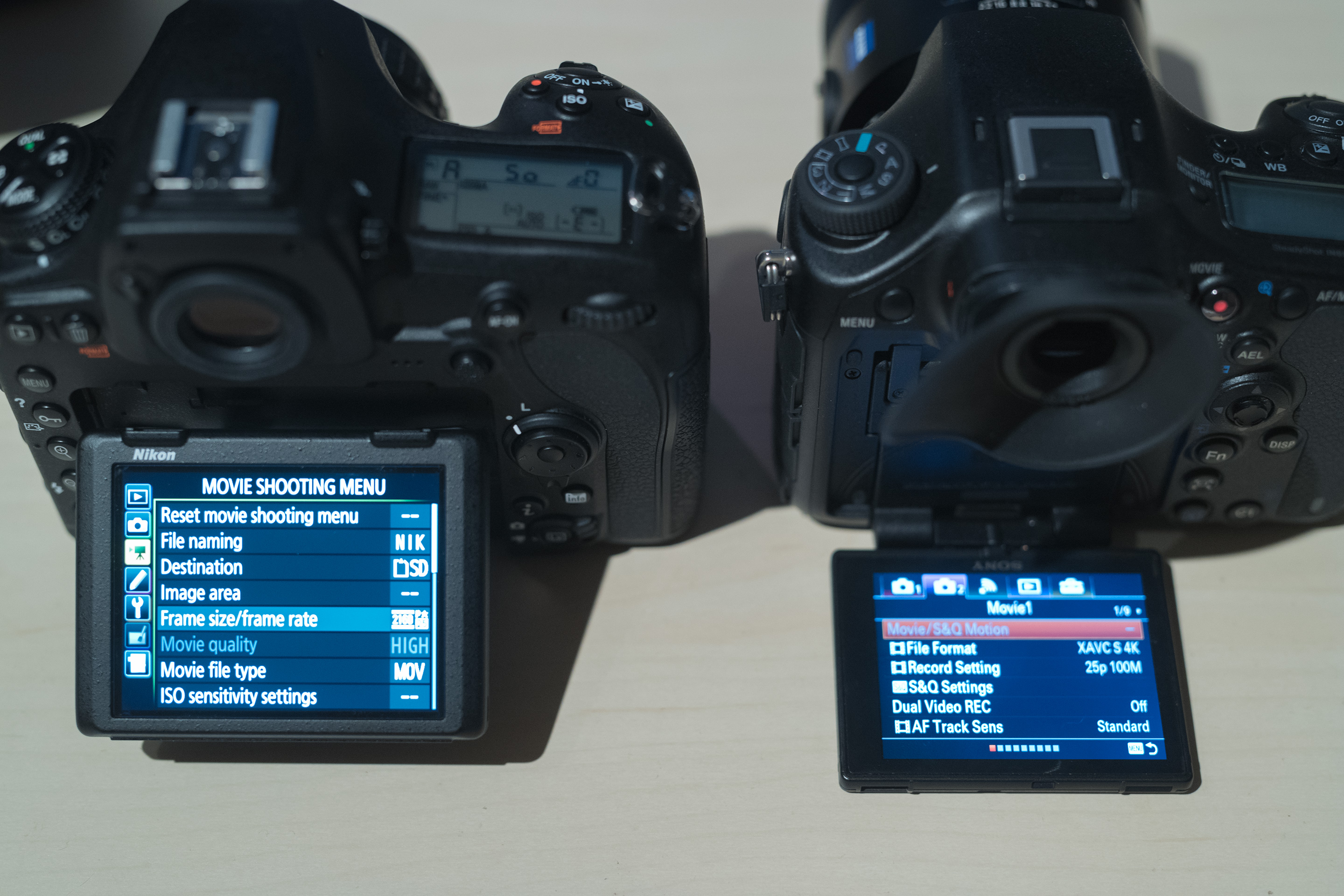 Is it for you?

For stills I think people will prefer the D850 over the Sony A99 II because of the D5-class AF and massive optical viewfinder along with a Nikon-F mount.

It is certainly the more popular camera.

Now, add on a 4K video mode with image quality to edge out even the best Sony full frame cameras and you have a compelling hybrid.

It also helps that I can actually see my images, because the screen is way better than on all of my Sony cameras!

Where I feel the D850 is a bit weaker than the A99 II and Panasonic GH5 though is for bare-bones handheld shooting, due to the lacklustre stabilisation and lack of EVF. Arms out stretched, not as stable… No VR primes from Nikon (daft)… You either shoot 1080p with electronic IS in-camera that you could have just done yourself in post with Warp Stabiliser, or you pony up for a slow-ish aperture Nikon zoom with VR for more stable 4K. The electronic IS doesn’t work in 4K mode and it crops the FOV slightly in 1080p. It’s also absolutely terrible for panning or sudden movements, introducing tearing and other weird artefacts.

Aside from the lack of stabilisation and EVF, this is a great tripod camera for artistic locked-down on-location shoots of all kinds and a superb timelapse tool. It’s also practically the best full frame Nikon stills camera ever made.

It’s more comfortable to use for video than the 1D C but offers similar 4K quality and much better Super 35mm quality. The articulated screen and instant switch-a-roo button between full frame and Super 35mm, both in 4K at the same image quality really help.

Stay tuned for the full review.