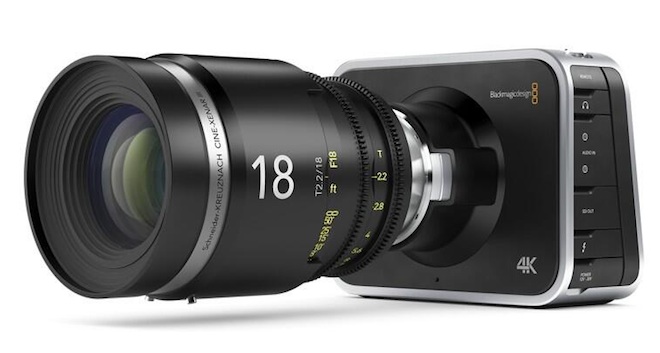 Though it cannot be 100% confirmed I am pretty sure the Blackmagic Production Camera uses a sensor supplied by CMOSIS, which if true would be very good news as it is the latest technology and already in mass production.

Here are your sensor questions answered…

Why do sensitivity and dynamic range drop with a global shutter?

John Brawley says the native ISO of the Production Camera is ‘a smidge’ lower than the native sensitivity of the Blackmagic Cinema Camera, which was ISO 800. I’m guessing ISO 640 would be the native ISO on the Production Camera. The same drop can be seen between the rolling shutter Sony F5 and global shutter Sony F55. The former is ISO 800 whilst the latter is rated at ISO 500. The higher ISO’s quoted for the F55 (ISO 1250+) are actually equivalent ISOs in the SLOG and SLOG2 modes.

The reason for this is that the electronic global shutter mechanism is incorporated into every pixel on the sensor thus taking up more room, leaving less room on the pixel to capture light. The photosites are smaller as a result and therefore less sensitive and slightly nosier.

Dynamic range decreases for the same reason – the well or ‘bucket’ that captures light is smaller. 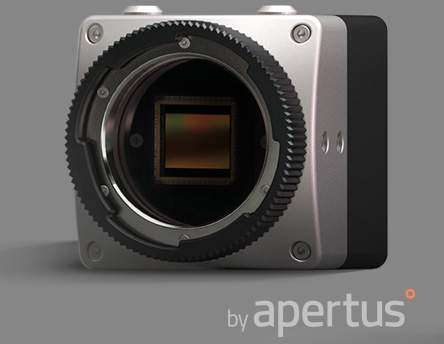 Are there any other cameras using the CMOSIS 4K sensor?

Yes. The Apertus open source camera project aims to produce a camera with the same sensor. The Axiom will enable all the features of the sensor such as variable dynamic range and variably high frame rates but will not be able to record onboard. The camera will output 4K via HD-SDI to an external recorder.

Does the sensor have a high dynamic range (HDR) mode?

Yes in fact it has 3. The sensor is special in that it can customise dynamic range onboard the imager before it reaches any de-bayering or image processing hardware. According to the Apertus Axiom project, Smart Dynamic Range works by modifying the linear dynamic range of the sensor to make it more like a film negative. However by changing the response curve, this has implications for detail and tonality – so it is a trade off between good colour and skin-tones and dynamic range. Sometimes you won’t need 15 stops so you’d be better off with better tonality. Let’s not push Blackmagic to compromise our colour for the sake of extra dynamic range. 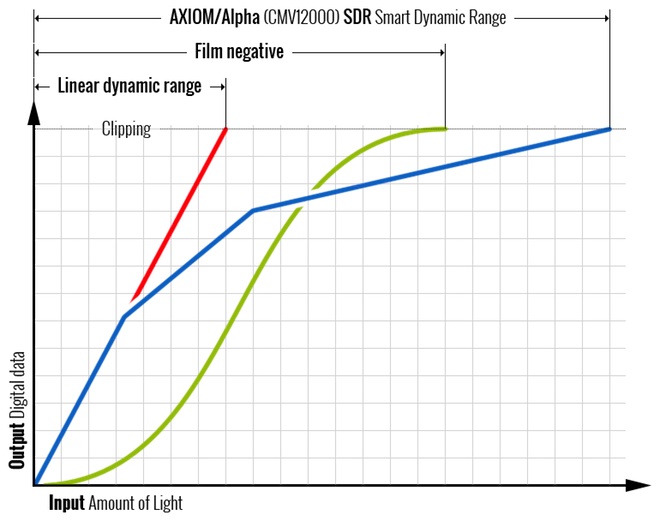 “Imagine your camera had a knob for dynamic range like the one it has for shutter speed. You can turn it up or down just as you need it. Sounds crazy doesn’t it? That’s exactly what this sensor can do. While in general the notion is “the higher the dynamic range the better” you need to be aware that you sacrifice details (digital bandwidth) in shadows/midtones for gains in latitude when you increase dynamic range. This could be undesired in situations like when dealing with fine skin tones or when the scene does not require a high dynamic range at all e.g. when shooting well lit indoor scenes. Smart Dynamic Range for us means that you can dynamically influence the response curve for your particular situation in a range from 10 – 15 stops of dynamic range.”

Is the sensor in mass production or still sampling?

According to CMOSIS, the CMV-12000 went into mass production in July 2012, exactly 12 months prior to the date Blackmagic hope to ship the final camera. So looking good on that front – it is a tried and tested part.

Do they make any other interesting sensors?

Oh yes. How about this 70MP full frame 35mm sensor?

Why can’t the Blackmagic Production Camera do high frame rates?

Having a sensor capable of 150fps in 4K and 240fps+ in 2K is one thing, dealing with the date rates required to capture such large frames in massive quantities very quickly is quite another! This would require considerably more expensive computing power on-board the camera and would likely quadruple the cost of producing the camera. Heat management would also add to the cost, as the camera would require innovative heat pipes and better cooling exhaust fans. This would make the camera more complex to manufacture and it would no-longer be a simple picture making box. 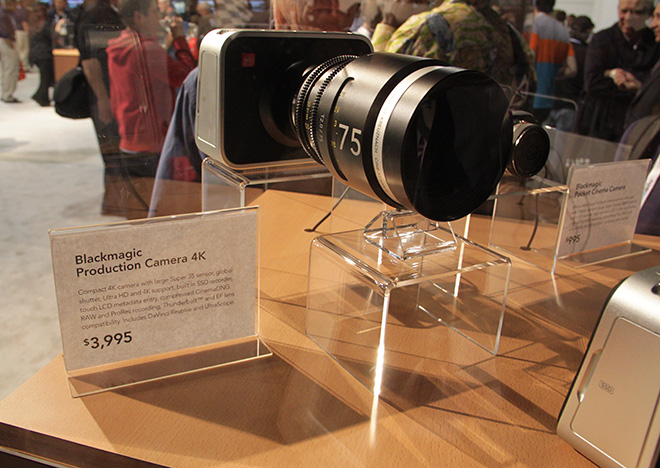 The same situation is illustrated by the price difference between the Scarlet and Epic. The Epic costs more than double because of the higher frame rates and more powerful ASIC boards. Upgrading the sensor to Dragon also costs more than just the cost of a sensor unit.

Why does the Sony F55 have such good low light performance even though the native ISO of the sensor is just 500?

Low light performance has a lot to do with how cleanly the sensor renders the shadows, so that when they are lifted from the raw data they remain silky smooth and clean. The Sony sensor clearly has a very wide dynamic range and clean data in the blacks with greatly reduced fixed pattern noise. The sensor output is digital and the pathways which carry the data off the sensor are optimised to minimise interference and noise. The sensor is also kept extremely cool and the circuit boards in the camera are engineered to remain cool whilst crunching the data, in much the same way Canon have redesigned the 1D X circuit boards to handle that sensor in full swing for the 1D C. 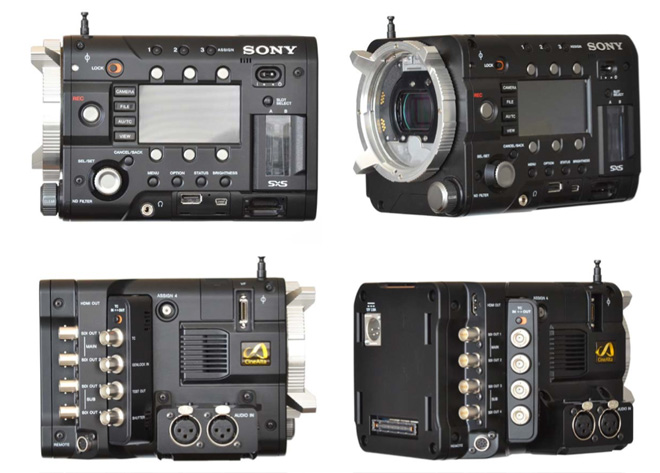 Wasn’t video rather poor on the CMOSIS sensor in the Leica M?

Actually it wasn’t bad – similar to other stills cameras. The difference here is that the CMOSIS sensor in the Leica M was a custom design ordered by Leica and designed for stills, whilst the CMOSIS part which may be in the Blackmagic Production Camera is an off-the-shelf CMOSIS specified sensor designed for video. The megapixel count is 12MP (4:3) and 10MP (16:9) relative to 20MP on the Leica sensor. That sensor therefore has to line-skip and pixel bin to get the output down to 1080p, then it has to compress it very heavily to H.264. On the Blackmagic Production Camera the sensor reads out every pixel and much more data is stored in the raw files. You only have to look at the media capacity requirements for 30 minutes of footage and compare it to the Leica M video clip files to see how much more detail, dynamic range and colour information is stored from the CVM-12000 relative to the custom CMOSIS sensor in the Leica.

Are CMOSIS big enough to deliver on time?

CMOSIS employ a small team of over 40 people but that is devoted to the design and testing of sensors in-house. Their facilities are based in Antwerpen, Belgium over 1000 square meters. They have test and characterisation labs but also a 100 square meter cleanroom for wafer tests and final device testing, so will likely avoid the dirty glass issues of the BMCC sensor supplier. However for manufacturing I believe CMOSIS rent space in world-leading manufacturing fabs (for example from STMicroElectronics) where many of the world’s image sensors (such as ones for smartphones) are made. They have therefore been able to deliver a large quantity of Leica M cameras without any unexpected delays despite the relatively compact design office in Belgium. CMOSIS are currently expanding their team and are hiring this week for 7 positions. 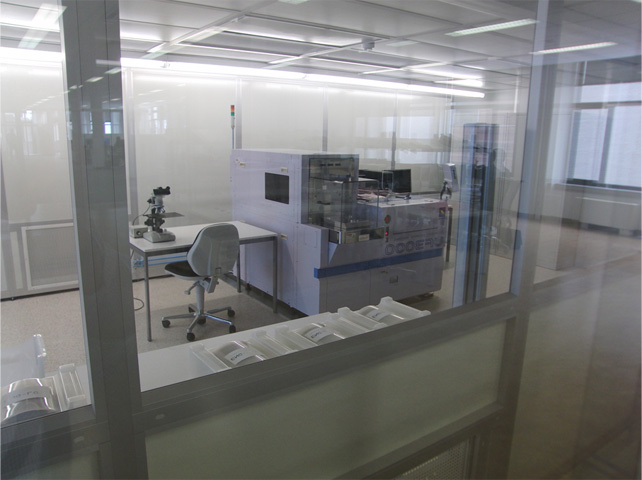 Above: the CMOSIS cleanroom in Belgium

How much does the sensor cost?

The pricing per unit likely depends on volume but figures between $1000 and $1700 per sensor seem likely. It could be possible that this is much less.

Can anyone order a sensor in any quantity from CMOSIS?

Seemingly yes. Their ‘How To Order’ page mentions that they take credit card payments for orders smaller than 1000 euros!

What about the Pocket Camera?

Blackmagic say the sensor in the Pocket Camera is new. CMOSIS also do a 1″ sensor, the CMV 4000 which corresponds to Super 16mm. However the sensor has a global shutter, whilst the Pocket Camera has a rolling shutter which would seem to discount this one. It is a square 2048 x 2048 (4MP) sensor capable of 1080p raw. It can do a maximum of 180fps at full resolution, in 10bit colour. In 12bit it can do up to 37fps. Despite the small size of the sensor the lower 2K resolution means the photosites are as large as on the Super 35mm Production Camera sensor at 5.5 x 5.5 μm2.

2 versions of the CMV4000 are in production with the latest V3.0 coming out last Summer with black sun-protection (which should fix the sun spot issue of the original BMCC on the Pocket Camera) and on-chip PLL, whatever that is! 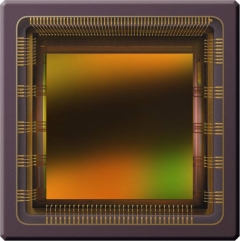