Leica are really going to after pro video shooters with the SL.

Meanwhile RED are persuading medium format photographers to use a 6K Dragon or Weapon.

A gap in the space/time continuum captain?!

Step forward the next specialised tool to turn camera-chameleon: the Fuji X Pro2. 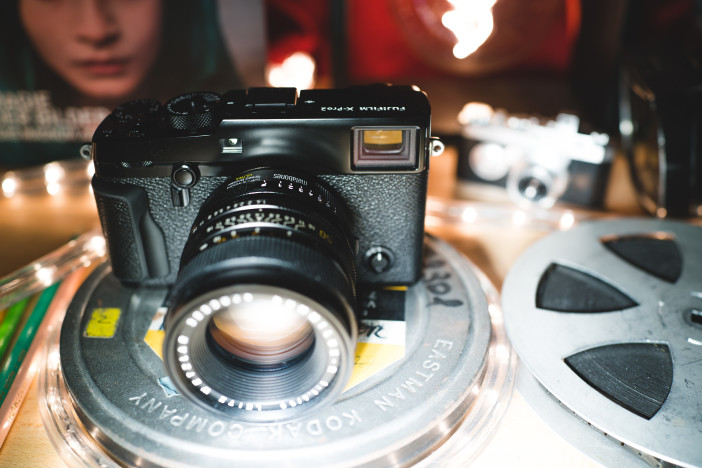 As we know, a chameleon is a slow moving old-world lizard with long extensible tongue and large protruding eyes (reminds me of someone).

The Fuji X Pro2 is no longer a slow moving lizard, rather a more rapid reptile hot footing across the desert Mad Max style.

The comparisons with a Leica M are inevitable with this camera… For stills the X Pro 2 is extremely special. It is of course better than a Leica, it strips away all the obsolete mechanical parts! (I am only half joking).

It’s cheaper, lighter, faster but just as nice to shoot with as the legendary rangefinder in terms of feel and optics. It’s even pretty close for build quality considering the gap, no, gulf in price.

Now Fujifilm have brought their film simulation expertise to a pretty-decent video mode. Should we be excited?

Are Fujifilm film-like yet?

Some perspective. Until now, it was a competition between Canon and Fuji in who could hate video users the most. Canon accidentally revolutionised everything before hastily pulling the rug from under everyone without a spare $15,000 and roping off a pros-only VIP area in the corner of the room, marked “Cinema EOS Users Only”. Fujifilm’s tactic to win the competition was to serve up the worst video quality I’ve ever seen from any modern camera, to the point where it was so embarrassing for Fuji in reviews, even in glowing advertorials, that they had to do something about it.

The X Pro2 seems to share a similar underlying sensor architecture to the Sony A6300 with 4K readout, copper wiring, very good class leading high ISO performance. However they have added to this enticing hardware package one glorious feature and one incredible own goal. 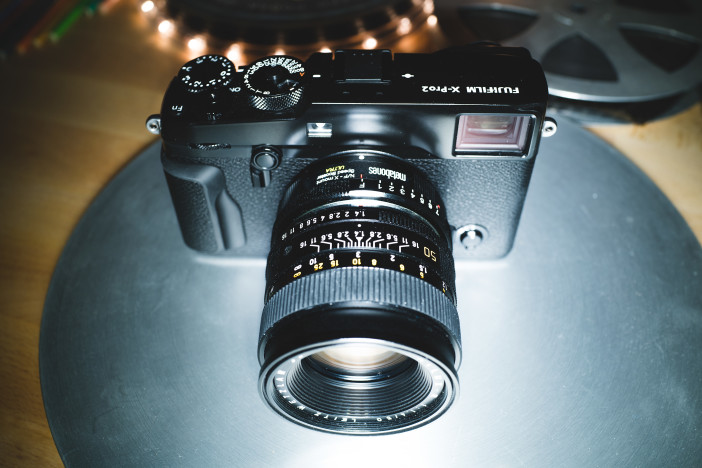 The winning part of shooting video on the X Pro2 is the colour science underpinning the video mode and JPEG engine. It’s simply the best. To the extent that Tina Turner would write a song about it.

The inglorious own goal however is that even though by their own admission the Fuji X Pro2 is fully equipped for 4K video, Fuji admit that due to ‘only’ 20% of their users wanting it, they have disabled it in firmware. UTTER stupidity. 20%!! Why potentially flush even 0.01% of your sales down the toilet for the sake of firmware? Are they seriously expecting ALL video users to get the X-T2 instead? Why not let us have the choice of body? I find this all a bit hard to believe – but it is all out there, in various interviews with Fujifilm. I very nearly did not buy the X Pro 2 purely on this basis. If they don’t re-enable 4K in firmware on this camera and reserve it as an X-T2-only feature, they’re making an enormous mistake.

The 1080p, 2K, call it what you will… On this camera it’s a real pleasure. It shouldn’t be but it just is. It is outstanding in every way aside from moire and aliasing!

Yes… moire! Aliasing! At this point pixel peepers will probably choke on their cornflakes… “C’mon Andrew, 1080p with moire, in 2016?!?”

But no I insist. There is something about it.

It is way more detailed and ‘alive’ than the Nikon D750’s highly rated 1080p and the codec is similarly clean in the shadows.

Firstly, straight off the card the files have a bit of a scratchy low-fi look to them, with hugely crushed blacks and dynamic range appears limited at first glance. The files really seem to clip the blacks like nothing else when played back on my Mac direct from the card. Turns out it’s some kind of bug. Remapping to 16-255 in Premiere’s Fast Color Corrector tool brings amazing amounts of detail out in the blacks. Then applying Film Convert’s Kodak emulation under the Arri Alexa DCIP3 profile gives you an absolutely stunning image in terms of colour and a film-like grain. It cleans up incredibly well and the Fuji’s colour & white balance is spot on to begin with so it doesn’t need hours of tinkering with LUTs.

Unfortunately the in-camera sharpness control does not make a difference to the video mode, so the image is certainly on the sharp side. However, aside from moire and aliasing which can be severe on the X Pro2 depending on the shot, usually fine detail looks very nice – reminiscent of the insanely sharp GH2. Yet the tonal response, super smooth blacks, rich colour and fantastic skintones elevate it far beyond that old classic.

Another surprise is that stabilisation with the Fujifilm OIS lenses (what few there are) works outstandingly well for some reason, in video mode on the X Pro2. Optically the Fuji X lenses remain a cut above average to say the least and this is another quite unique thing about video on the X Pro2 – the look these lenses give to video. It has a Leica feel with the native X lenses but you also get a mount which is compatible with the Metabones Speed Booster for the full frame look and brighter apertures than F1.2.

Another pleasant surprise – AF is way more responsive in video mode on the X Pro2 than I expected for such a photo-orientated tool. Not A6300 league of course but much quicker than 90% of the rest. Only in poor light is it far better to do without it.

Is the ‘technical’ video quality offered by the X Pro2 competitive in resolution terms with 4K or devoid of moire like the best video orientated mirrorless cameras of 2016 – of course not. However the ‘X’ factor of the rest – the colour, the lenses, the electric and ‘alive’ feel of the images straight off the card – is unique to this camera.

I have never enjoyed a camera more on a combined video and stills shoot than I have the X Pro2. The fit, finish and quality of this camera is simply superb. The responsiveness, logical control layout and superb menus make it an order of magnitude less fiddly than the camera it replaces, the old X Pro1. I used to have the older model, for use with my Leica M lenses and the superb SLR Magic 50mm T0.95 M mount lens… but the first camera was a real slow dog to use in terms of responsiveness, manual focus, or auto focus. That’s all changed. Also the better video quality serves to make the live-view display far more detailed and crisper in both the EVF and on the 1.6m dot rear LCD (which is of superb quality like a Nikon D5).

The optical viewfinder is a pleasure to use with a 35mm or 50mm equivalent lens. Any wider or longer and you don’t have the framing accuracy, but it’s really special to shoot this way. Sadly you can’t record video whilst looking through the optical viewfinder, which would have been fun with a 35mm equiv. lens like the superb Fujifilm 23mm F1.4.

This time in the optical viewfinder the camera can show a miniature live-view picture for sharp manual focus in the bottom corner, which is space-age compared to anything Leica offers. I find it works superbly for MF through the rangefinder optic.

The EVF slides into offer up the actual shot as soon as you click the shutter button, which is really satisfying… magical in fact. However it’s rather dim. Switch to the EVF full on and you get a much brighter display. Weird that you can’t change the brightness of the shot review in OVF mode!

The EVF is extremely sharp and the optics seem improved – not quite as large as the EVF on the X-T1 but not so much smaller that it makes you really miss it. There’s very little lag in the EVF due to a 80fps (80hz) live view display in action.

In fact with the sensible control layout being almost perfect and even a joystick on a mirrorless camera for direct AF point selection – makes a change – the X Pro2 is nearly the FIRST EVER perfect digital camera ergonomically for photography, but for one disturbing blunder…

The combined shutter and ISO dial is horrendous! You have to lift the collar up around the outside of the shutter speed dial to change the ISO and it’s almost always the case that the shutter speed dial comes along for the ride as well, so you’re accidentally changing the shutter speed if in a hurry, which is the worst time for you to do that, whilst also having to rotate the ISO wheel several times whilst adjusting your grip on the collar, just to do a broad sweep of sensitivity from 400 to 3200 for example. It shouldn’t have got to the final camera and sadly you can’t assign ISO to any other button or dial on the entire camera. Another problem with the shutter wheel is that although it looks awfully pretty, it has 1/60 and not 1/50. The latter is the crucial 180 degree shutter for 24p and 25p, so to engage it takes two controls – first the shutter speed dial and then a brush of the rear dial as well. 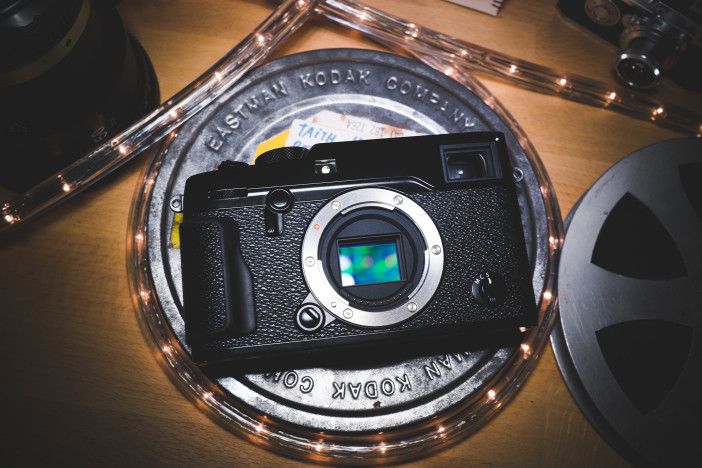 Interestingly the sensor on visual inspection has a clear cut-out in the middle, probably due to the phase detect AF points?

Visually the CMOS sensor looks very different to the one in the A6300 and of course it has Fuji’s X-Trans variation to the usual bayer RGB arrangement of photosites. 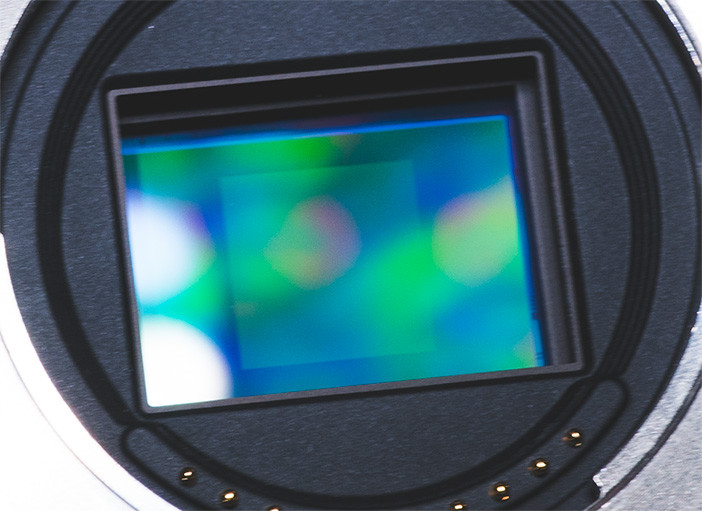 Fujifilm need to grasp this opportunity

I have some advice for Fuji. If you want to increase sales and broaden the audience for your products, don’t keep asking your existing users what they want. Ask some new ones! Preferably people who aren’t already loyal X Pro diehards! Of course loyal Fujifilm photographers will say they don’t need video. Had they asked a sample of the video community if they’d like to shoot 4K using Fujifilm’s X lenses, film simulation and expert colour science the reply would have been something along the lines of “hell yes take my money!!”

So many more people would have ended up investing in the system and the hardcore purist photographers wouldn’t have been bothered anyway. What’s a couple more options in the movie menu going to do?

I can understand Fujifilm wanting to court the ‘purist’ photography enthusiast – it’s where the majority of the existing sales come from. These are the kind of user who rant on the DPReview forums that video modes shouldn’t be on a stills camera because it makes it gimmicky and dumbed down – sadly it appears Fujifilm almost agrees with them!

I know from living in Asia for a while that the market there is far more traditional and stills orientated than hybrid video / multimedia…In the US, UK and Europe we seem to shoot video on stills cameras more, because we’re weird! But for heaven’s sake Fuji… the X Pro 2 is a worldwide flagship product for the company and it has a broader audience than just hardcore artists who think video is for people who shoot themselves in mirrors in toilets and Vine clips of their cats. 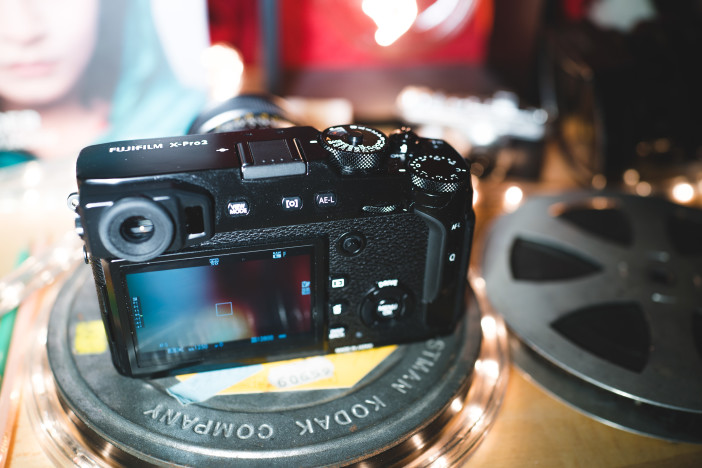 Give us that 4K firmware update.

It will at the very least solve the moire and aliasing issues with the 1080p, whilst at the same time giving us an alternative to the best selling Sony A6300 with better ergonomics, superior viewfinder (both in terms of optics and resolution), beautiful film simulation and colour science.

Fujifilm have a legendary presence in the cinema world, their film stocks and cinema lenses are a class act… To build on this with the X Pro2 opens up the system to a whole new audience.