Buy the E-mount Metabones Speed Booster – $599 for Canon EOS lens adapter, $399 for others

The Metabones Speed Booster adapter brings the full frame look to Sony mirrorless APS-C and Super 35mm E-mount. (Indeed it will bring the Super 35mm look to Micro Four Thirds but not until March).

It would appear the full frame sensor is now rather pointless. Is there a catch, a trade off in image quality?

The fabled full frame look. Some would buy a 1D C without hesitation. For the rest of us without $12,000 down the back of our sofa the full frame choices are rather limited.

The Nikon D800 is a veritable festival of moire and aliasing, the 5D Mark III fixes this but lacks any other meaningful improvement over the very dated 5D Mark II it superseded. Neither match the feature set or overall video performance of the most affordable digital cinema cameras like the Sony FS100 (now under $4000 used) and Blackmagic Cinema Camera ($3000 new). Pricing and accessibility for artists remains top priority especially on EOSHD – very important. I sent $4000 Sony’s way for the FS100 and got much better 1080p for not much more than the 5D Mark III. Now for just $600 I get full frame. It certainly beats spending $3500 on a underwhelming 5D Mark III or stupidly lusting after the crazily priced 1D C.

The Metabones Speed Booster adapter addresses the biggest complaint people seem to have have of the Blackmagic (sensor size) – giving it a near-Super 35mm sensor – and turns the FS100, FS700 and Sony’s 4K monsters the F5 and F55 into full frame video cameras. 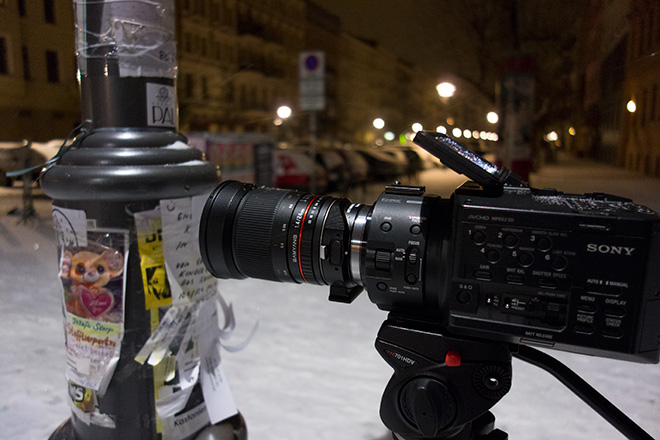 The glass in the Metabones Speed Booster is designed by Brian Caldwell and Wilfried Bittner. Caldwell is a celebrated optical engineer who is currently working for Panavision on their 70mm cinema primes… Twelve of them!

So for Caldwell designed optics this is quite affordable. No make that very – it is $600, which includes the electronic side which is worth $400 alone. This of course allows full electronic aperture, IS and even AF on most Canon EF lenses.

The main obstacle that people encounter when considering a replacement for their Digital Rebel, 7D, 5D or Nikon is that switching systems means abandoning a perfectly good investment in full frame Canon or Nikon lenses. At a stroke that problem vanishes in the mist along with any complaints over crop factor. Crop factor is toast. 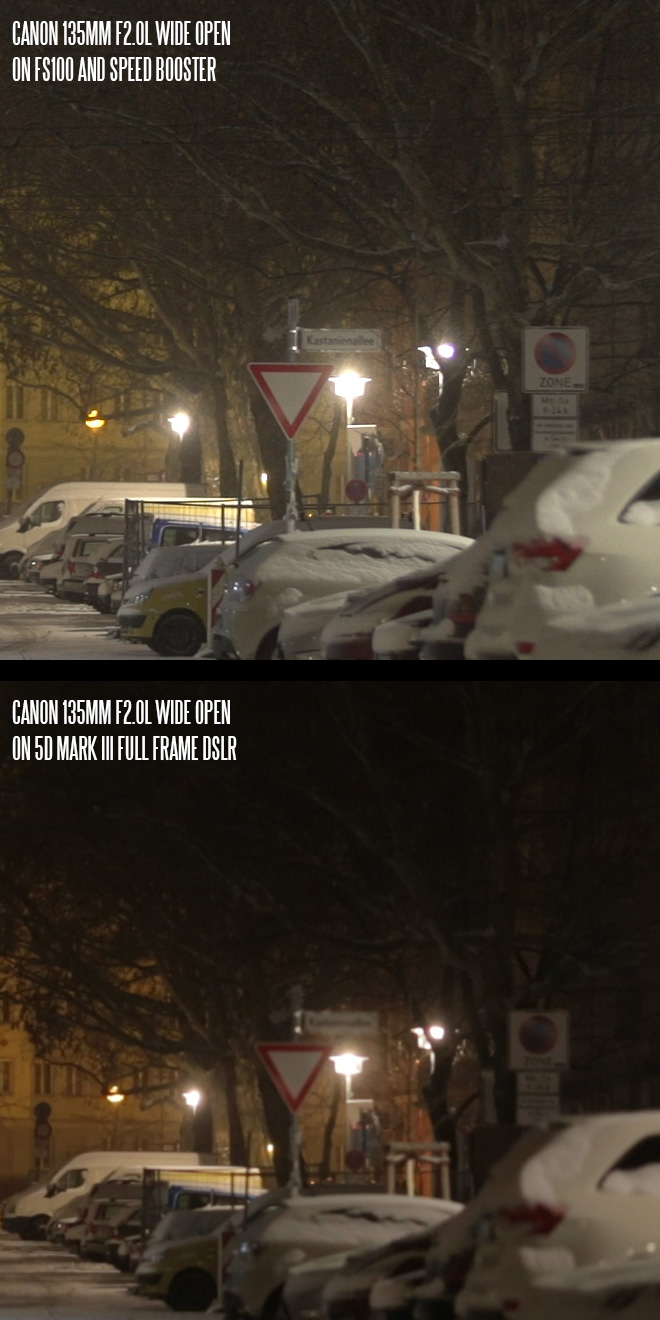 Shot with my Canon 135mm F2.0L the 1:1 crop above is astonishing because the settings (1/50, ISO 1600) and lens are identical on both cameras yet the final quality could not be more different.

In no way is the Metabones adapter giving us a poor man’s full frame image here. F2.0 becomes F1.4 on the Speed Booster and this increase in brightness is really evident. The 5D Mark III is very nifty in low light but it cannot compete with the Speed Booster and FS100. Both shots are ungraded, direct from the card. The FS100 with Speed Booster is tack sharp and you’re looking at a 1:1 crop not of the centre but of the right hand side of the frame.

Sharpness with this Canon 135mm F2.0L and adapter combo is superb but it varies a lot between optics.

With good modern glass desiged for digital, the Metabones adapter sings. It performs superbly with the Canon 135mm F2.0L and Samyang 24mm F1.4.

Not all lenses work as well with it. Below I used a very cheap Nikon 50mm E series lens on the NEX 7 with Speed Booster and the 5D Mark III and tested for sharpness in the centre and at the bottom right corner. In the centre the Speed Booster actually corrects some coma and gives a small sharpness and contrast boost, however the fall off in sharpness towards the edge of the frame is more severe than on a full frame DSLR without Speed Booster. It seems to be more of a problem on old lenses designed for film than newer ones designed for digital. 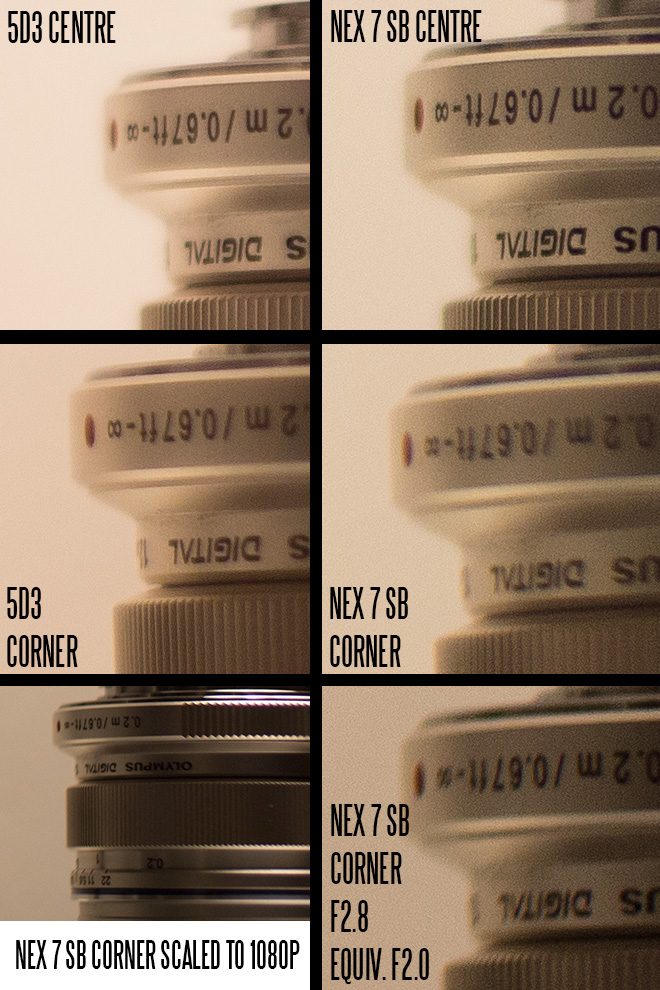 To fix this you need to stop the lens down or try a different lens.

Corner sharpness is more of an issue for stills. For video with the downscaling to 1080p you will not notice the loss as much.

Be aware that some 35mm photographic lenses are naturally soft in the corners whether on a full frame sensor or on the Speed Booster!

Corner sharpness matters most when you’re focused at infinity on a straight horizon. It matters less when you’re not focussed on infinity and your subject is centre frame as the edges contain the background which is out of focus anyway.

One way to fix corner sharpness is simply to take the adapter off if it doesn’t help the shot. Simple.

You see – the problem is really quite straight forward with simple solutions and not worth stressing too much about.

I have also found a significant gain in corner performance is possible with some lenses, such as the Leica R 50mm F2.0 just from stopping down by 1 stop from wide open. The below is a crop of the most extreme corner of the frame shot at F2.0 (left) and F2.8 (right) with a Leica R 50mm F2.0 on the Speed Booster + NEX 7. (You need to click the image to enlarge it order to appreciate the difference)

Because F2.8 is as bright as F2.0 on the Speed Booster stopping down by 1 stop is in effect ‘penalty free’. It is perhaps fairer to compare the same lens wide open on a full frame camera and stopped down 1 stop on the Speed Booster to match the effective F-stop. For example compare optical performance shooting wide open at F1.4 on the 5D Mark III to shooting stopped down to F2.0 on the FS100. In that situation sharpness is always better in the centre with Speed Booster and almost evenly matched in the corners with the right glass.

For ultra low light shooting you can shoot wide open at F1.2 or F1.4, which are transformed into an astonishing F0.90 and F1.0.

You will not find a wide angle (24mm equiv.) F1.0 anywhere on the market. Yet suddenly here you are shooting with one on a crop sensor!! (The Voigtlander 25mm F0.95 is not designed to cover full frame and offer a wide field of view).

The extenuated shallow depth of field effect of full frame is transferred to APS-C / Super 35mm with the Speed Booster adapter. At the same physical aperture, the focus drop off is the same and the overall image looks almost identical to a real full frame camera as does bokeh. The main difference is that the field of view is not quite 1.0x full frame, there’s still a slight 1.1x crop-in but it is hardly a bother that your 24mm becomes a 25mm.

Because full frame is a ‘premium’ photography product, the Japanese corporate machine has been mindful of limiting supply of full frame cameras in order to maintain inflated prices and margins. We waited a long time for the D800 and 5D Mark III and it is only now in 2013 that for the first time we have two ‘affordable’ full frame DSLRs with stripped down features – the D600 and 6D. Neither do very good video. So to have that full frame look when I need it on my Sony video camera is a real blessing.

The real world performance when you shoot with the Speed Booster and see the result is far better than any lab test of corner resolution would imply. The claims of this adapter defy belief… Scepticism well founded. And yet…

One thing which could be interesting to try is a medium format lens on the adapter. A Zeiss 85mm F2.8 for Hasselblad can for example adapt to the EF mount and fit the Metabones. This may avoid any loss of resolution in the corners as the image circle of these lenses is designed to fit 70m!! I have not tested this yet.

I had no issues with the electronic side of the adapter but I don’t have a warehouse sized collection of EF lenses to test with it. My investment is mostly in anamorphic and manual focus stuff. It would make sense to check the compatibility list if you rely on things like IS and AF. Some lenses may have issues with focus on the adapter too – the Canon 100mm F2.8L Macro did not play well on the earlier Metabones EOS adapters.

All in all – if this adapter does not send shock waves through the camera industry I don’t know what will.