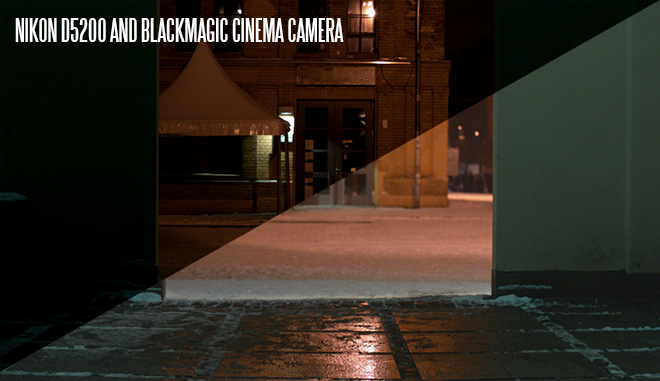 In the early days of DSLR video the codec was probably the weakest part of the camera. With the advent of uncompressed HDMI out – the codec is no longer a weak point but sensor sampling becomes an Achilles Heel.

Can the Nikon D5200 benefit from a hike in image quality from using an external recorder?

So far, HDMI on DSLRs has a poor track record.

In pretty much all situations it has been designed to feed a television in playback mode, not for acquisition.

On some cameras such as the hacked Panasonic GH2, the internal codec even gave far better image quality than the clean HDMI output.

You never seem to get a progressive 24p feed out, it always seems to be either wrapped in an interlaced output or 30p. In live view mode the Nikon D5200 outputs full 1080p, but only at 29.97fps not the cinematic 24fps. If you hit record on the camera with a card inserted, it switches to 24p internally or whatever your movie format is set to but the HDMI output drops to 720p!

On the plus side the D5200 seems to be one of the first to output audio during live-view over HDMI – so you can monitor audio that way and not be inconvenienced by the lack of headphone jack on the camera. The use of dual system audio isn’t an absolute necessity with the D5200 – as the camera has a mic socket, manual gain control and that audio will be on your ProRes files – no need to sync it up. 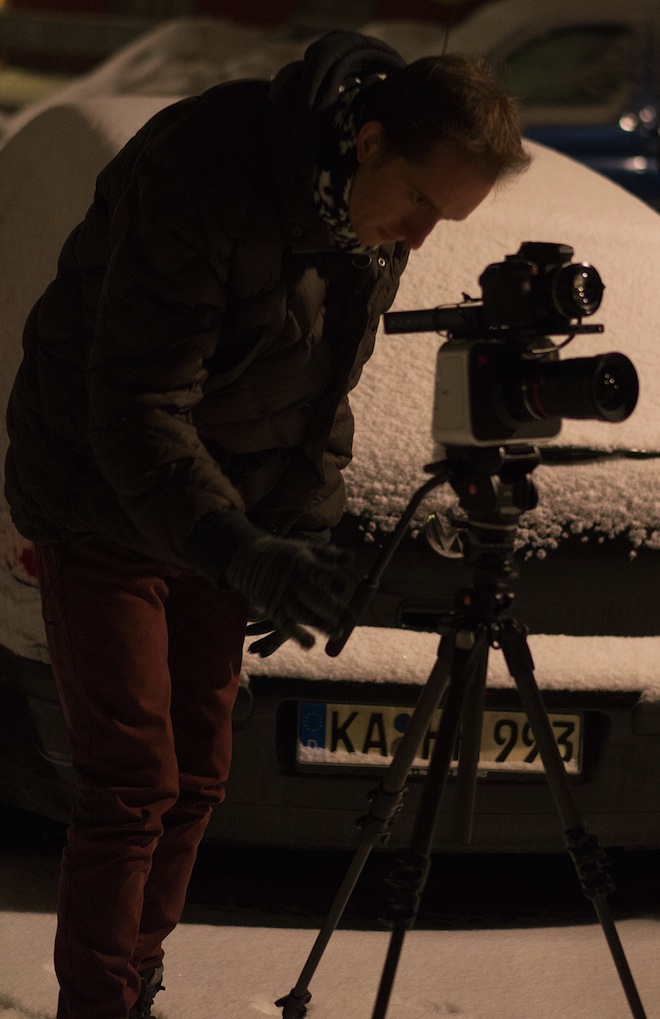 Above: me in sunny Berlin testing the ProRes kings. No, not the Alexa but setting up a shoot with one in March

I have some doubts over Canon and Nikon’s specs when they talk about HDMI. Canon say they have uncompressed 4:2:2 coming in a firmware update this April for the 5D Mark III, a full year after the hardware was released. The Nikon D800 it is claimed does 4:2:2 1080p out of the box. Is it really 4:2:2? This would require a significant change in the way the sensor is sampled. When a DSLR is skipping whole lines on the sensor just to read out a 1080p feed from a high resolution photographic imager, I don’t see how it can be sampling 4:2:2. Rather, I think the HDMI coming from these cameras is 4:2:0 wrapped in a 4:2:2 ProRes format by the external recorder, and Canon and Nikon are possibly guilty of mislabeling it as true 4:2:2 when it isn’t, much as the video is mislabelled 1080p when it is actually resolving far less in reality.

That’s the bad news over with. The good news is that the Nikon D5200 does indeed benefit from a small increase in quality when recording via the HDMI output. 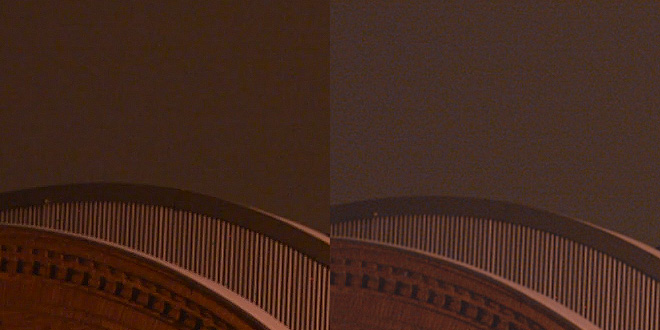 The internal recording is on the left, ProRes via uncompressed HDMI on the right. Compression artefacts are lower, detail slightly higher and the noise grain is finer over HDMI. It is a very subtle difference to the internal recording though, and I am having a few bugs. Some recordings start with the first few frames corrupted (sometimes a whole frame would be missing the red & blue channels and just be one shade of bright green). Sometimes the HyperDeck refuses to begin recording and you have to turn both the recorder and D5200 on and off repeatedly before it randomly begins working again.

I’m using the rather handy Blackmagic HyperDeck Shuttle as my capture device. The buttons on this light up which is very useful shooting in low light conditions, and it would be handy for the BMCC to have this feature too. Battery life is good and the device fits robustly around the SSD – though I’d like to see them make it smaller in the future – ideally not much larger than the tiny SSD itself.

Compared to the Blackmagic Cinema Camera which outputs real 4:2:2 1080p in ProRes format, there’s far more detail from the Cinema Camera’s image and no evidence of weak 4:2:0 sampling like there is on the D5200. The image is nice and clean up to ISO 800 on the Cinema Camera and at ISO 1600 the noise grain is nicer on the Blackmagic but the D5200 is a bit smoother looking. Push the Blackmagic in post to ISO 3200 and the D5200 has a clear edge in the cleanness of the image. However when the D5200 does get noisy – above 3200 or with a flat picture profile – it isn’t a pretty sight.

In terms of colour and gradation of course the native 10bit ProRes 422 on the Blackmagic takes some beating. The HDMI output on the Nikon D5200 is 8bit and the sensor sampling is probably not even that. It seems one channel clips early on the D5200 because this red light has a bias to yellow as it reaches the clipping point, whilst it is perfectly white on the Blackmagic. 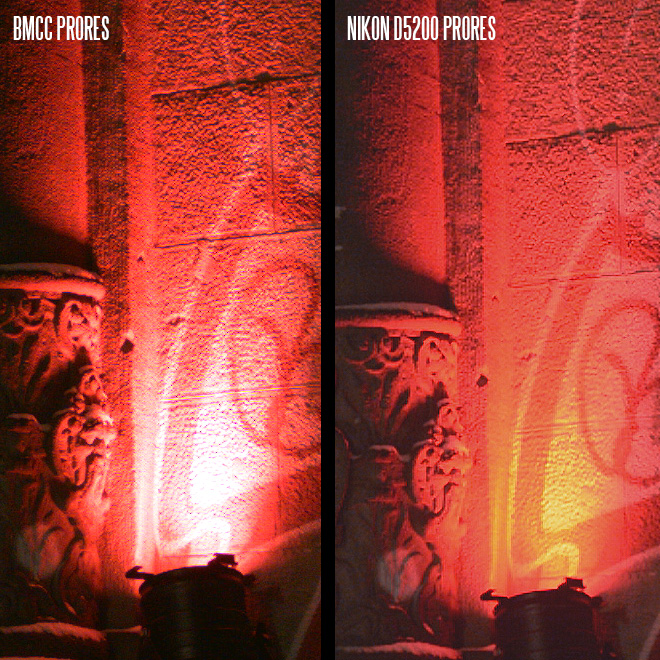 Resolution is way higher on the Blackmagic Cinema Camera than the D5200, but it is also quite an ‘honest’ image – you can tell it lacks an anti-aliasing filter.

As a result I don’t usually need to sharpen the BMCC in post but it definitely has more aliasing and moire than the D5200. Below I applied a very small amount of sharpening to the Blackmagic – but I needed double the sharpening on the Nikon to get it even close. The D5200 is a lot softer than the 2.5K monster, or the 1080p ProRes from the Blackmagic. 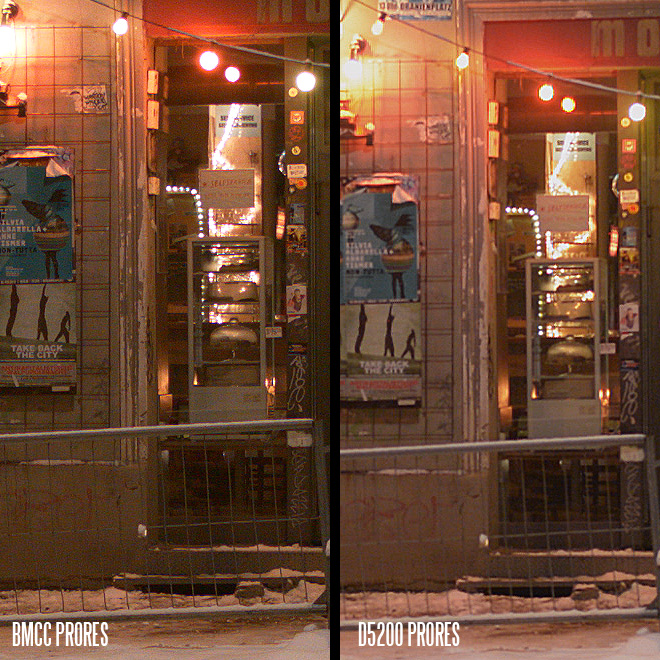 The evidence that the colour sampling is true 422 on the Blackmagic is in this shot – look at the pixelated outline of the red bulb for instance on the D5200 – that is tell tale 420 not glorious 422, it is far smoother on the 422 of the Blackmagic than it is on the uncompressed HDMI output of the Nikon. The sharpening makes this more visible but it is there on the original file.

Just how much more sharply defined detail is there on the original Blackmagic Cinema Camera file? Well the D5200 sharpens up well in post but it cannot match what the BMCC is capable of in ProRes let alone 2.5K raw. 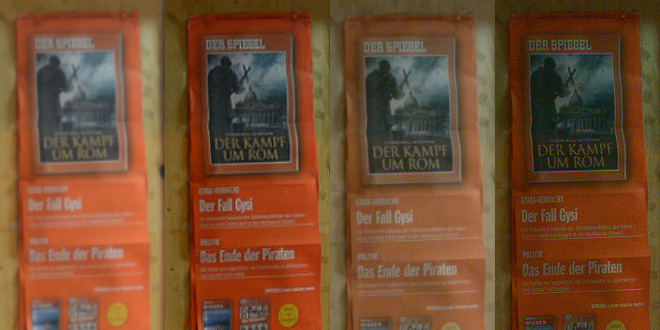 Bear in mind that in 2.5K the BMCC pulls out an even greater margin and that these web compressed 660px wide crops make the difference look smaller than it actually is.

Unfortunately the framing of the live view display is not 16:9, apart from some absolutely useless white notches at the far left and right showing you where the 16:9 letterbox starts. I found it difficult to get a proper feel for composition without masking off the 3:2 frame with black tape. That full 3:2 frame is just too misleading and you’re always surprised at how different the 16:9 crop looks even though you expect it to kick in. When you switch the live view display to show movie-orientated information such as audio meters and masking bars for 16:9, the HDMI output is no longer clean or full screen, so that isn’t the solution.

On the Zacuto EVF when the D5200 was set to output 1080p the frame was off the bottom of the screen and none of the scaling options worked to bring it back. In 1080i it was OK but then the HDMI recorder would get an interlaced image. If quirks like this aren’t intentional to segment the cheaper model from the more expensive D800, Nikon really do need to more extensively test their DSLRs in the field to avoid this kind of thing in future models, and issue a firmware update for the D5200 which gives us a proper 16:9 display mode and 1080/24p/25p HDMI for external recording.

The Blackmagic Cinema Camera has a lot of areas where it can be improved too of course. I find the colour accuracy of the BMCC’s screen to be a bit of a problem in a mutlicam shoot. You’re often wondering why it looks so desaturated even though the gamma is set to Video (Rec 709) for both the display and recording format. The ProRes files require a hefty saturation boost in post too and whilst this is normal when shooting with a flat image profile, the video gamma mode isn’t meant to be flat – it is meant to be ‘just so’ out of the box like a C300. I’ve also been getting some kind of interference pattern on my low light shots at ISO 1600 in ProRes too like wavy banding shimmering across the frame despite a proper 180 degrees shutter and 25p for European street lights – and problems with infinity focus on some lenses. The blacks are more crushed than I’d like on the ProRes files with video gamma so you definitely have to grade heavily and shoot with raw or film gamma to get the most out of the dynamic range. Even in video gamma mode it held onto the highlights better than the D5200 though, but the difference wasn’t that huge and the D5200 has more shadow detail. Let’s hope Blackmagic can iron these bugs out. I am sure they know about them from the beta testers for months now.

All in all, do I recommend recording in ProRes on the D5200?

If you use a monitor, and that monitor is called Atomos, then by all means acquire the image that way. What I don’t recommend is rushing out to buy a black box recorder for some mega hyper increase in quality. It really is very subtle.

If you do get a HDMI recorder, then the HyperDeck is extremely affordable and well put together. There will be a moment in the future where it will absolutely sing. It is just waiting for the right DSLR.

We’re getting closer – but no cigar!