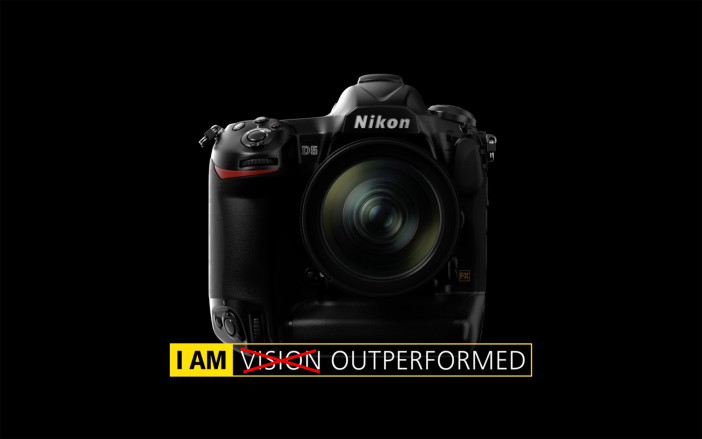 How does the new Nikon D5 compare to the Canon 1D C flagship for 4K?

As 4K marches on I’ve come to realise what I really want is a very capable compressed raw codec, a full frame look to my lenses, no more than 2.8K to keep the file sizes down (and high frame rates up) alongside the option of ProRes for a fast workflow, after all we have ProRes already from Blackmagic with 13 stops dynamic range for less than $1000 now. I’m not sure why Canon and Nikon persist with 8bit H.264 without also adding the option for larger but better quality files. 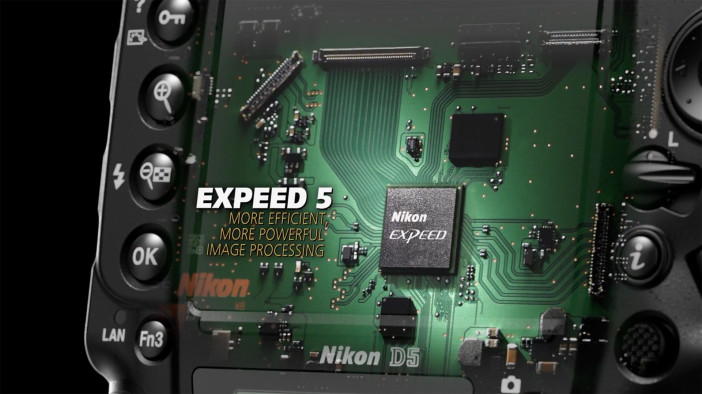 The main reason we need a new compressed raw video codec though (like the one offered by RED) is that sensors are now capable of over 14 stops of dynamic range, which you can’t pack into an 8bit compressed LOG format without colour going wonky when you try to actually USE the full dynamic range. There’s also banding in blue skies to be concerned about. 8bit is fine for a punchy high contrast scene or grey / dull looking high dynamic range scenes, but it cannot achieve both in one shot like a RED, Blackmagic or Arri Alexa.

It seems only the latter 3 really know what we want in a cinematic image. USABLE dynamic range and a SMOOTH roll off with the option for both raw and 10bit compressed codec. It’s no secret! They have been showing us all for years with the Alexa and pros have been telling manufacturers for years what they want!

Isn’t it about time the others started listening?

Blackmagic, Sony and Panasonic have shown that the components required to do this are now very affordably priced (it’s just that they never seem to end up in the same box!)

Now to Nikon. They have no excuses. We now have very cheap cameras with sensors doing 14 stop dynamic range in the raw data, along with very high frame rates for slow-motion and of course the bandwidth to handle much higher resolutions than plain old 1080p. Yet we never seem to get the full potential of that image out of the camera’s memory card slot, even as media has sped up dramatically. You can now get 250MB/s CF and SD cards, enough to comfortably handle 10bit 4K ProRes.

Magic Lantern have shown that a 14bit raw image is possible to 80Mb/s CF cards on a 7 year old camera, even without any compression whatsoever. On the newer 150Mb/s CF cards, recording reliability is bullet proof. 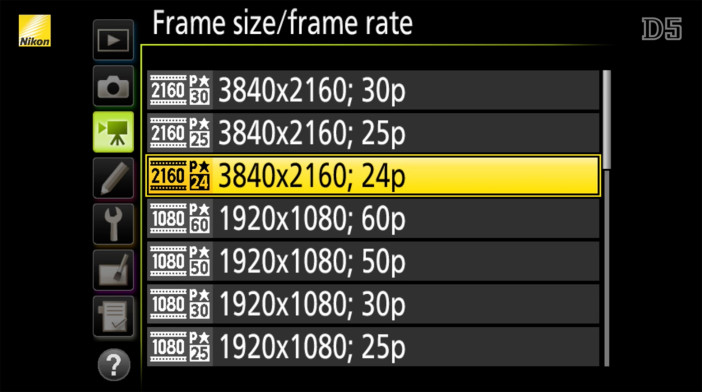 Instead all we seem to get is compressed 8bit codecs, dubious HDMI cables to pointlessly wrap that dreary 8bit feed in a 10bit container, plus even more dubious rolling shutter skew and no thought to ergonomic video shooting.

On a practical level the video modes of the new D5 and D500 are so poorly thought out and makes you wonder if Nikon even asked a single filmmaker what they needed, or at least the right kind of filmmaker.

I can assure Nikon that NOBODY wants a heavily cropped sensor in 4K or a 3 minute recording limit. These and the lack of DCI 4K at 4096 x 2160 severely limit the appeal of the Nikon D5 versus the competition. 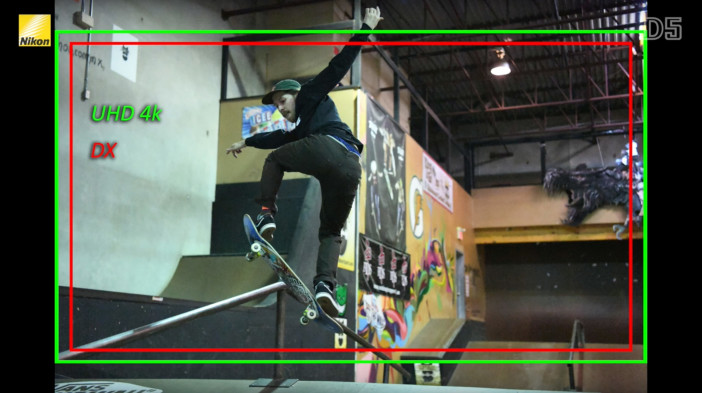 The crop on the D5 works exactly like this –

Both do a 1:1 readout from this window with no pixel binning but it’s a myth Nikon is perpetuating that a 1:1 readout gives optimal image quality. Actually the ideal readout is one that over-samples. 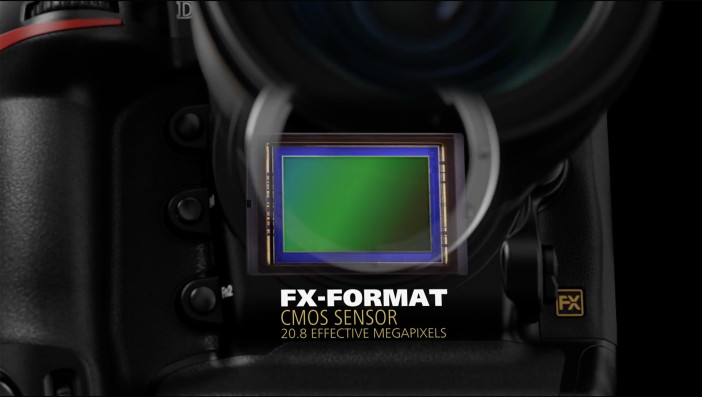 Obviously Nikon could not make the 5.5K full pixel readout on the 20MP D5 technically feasible, so they had no choice but to go for the heavy 1.45x crop mode instead.

The Sony A7R II is even capable of producing pretty good 4K from the full frame 42MP! What’s Nikon’s problem at just 20MP?

One way to mitigate a crop factor is to use a very good focal reducer like the Metabones Speed Booster. However the Nikon F mount doesn’t leave enough room for one. Had the Nikon D5 been a mirrorless camera, the DX 4K mode would have turned into FX and we’d all have said “welcome to the future Nikon”.

The fact that DSLRs are legacy technology with the 1970’s mirror box is starting to hurt them.

If you do want full frame video off the Nikon D5 you have to drop to 1080p. The problem then however is it doesn’t come from a full pixel readout like on the Sony A7S and A7S II. This 1080p is a pixel binned mode, with the inherent softness and moire which comes with that.

The 1080p on this camera also has a 3x crop 1:1 readout mode, a bit like the 2.7x crop mode of the D4. This gives extra telephoto reach but you may as well record 4K and do this in post – more flexible.

Above: put the audio meters and record time OUTSIDE THE FRAME!!

Even as it is heavily marketed towards professionals shooting video, the D5 lacks even the most basic of video shooting assists in firmware, such as focus peaking, waveform, with Nikon expecting us to add these via HDMI with an external monitor. The form factor of the DSLR is very ill suited to doing this as it unbalances the camera. 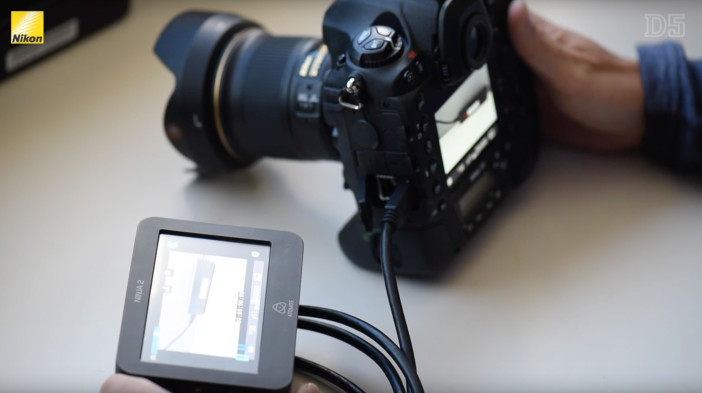 Recording externally only becomes of serious benefit to image quality when the camera is outputting 12bit or 14bit raw data, like the FS700 to the Odyssey 7Q+.

Nikon here has the D5 attached to the Atomos Ninja Star claiming it delivers much higher image quality and glorious 10bit ProRes. Having had a lot of experience with the Ninja Star, what it actually does with DSLRs like the D5 is to take the already processed image out of the camera after the damage has been done. The dynamic range and colour have already been compressed down to 8bit and the RGB data debayered to YUV. The HDMI port just siphons this off before it hits the H.264 encoder. The camera sends this signal over an uncompressed HDMI output, the fact that it’s uncompressed is a moot point as the signal is so thin – it’s not raw data. That’s why it can be sent over HDMI at all and doesn’t require an SDI port (something pros have LONG been calling for for robustness on pro DSLRs). 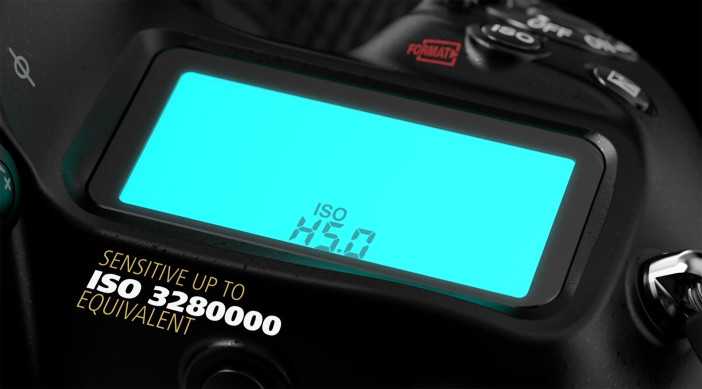 Nikon left a key spec out of all their launch information for the Nikon D5 and D500 – the codec’s bitrate.

Don’t worry Nikon, it’s not like video shooters need to know that!

You carry on being ridiculous! 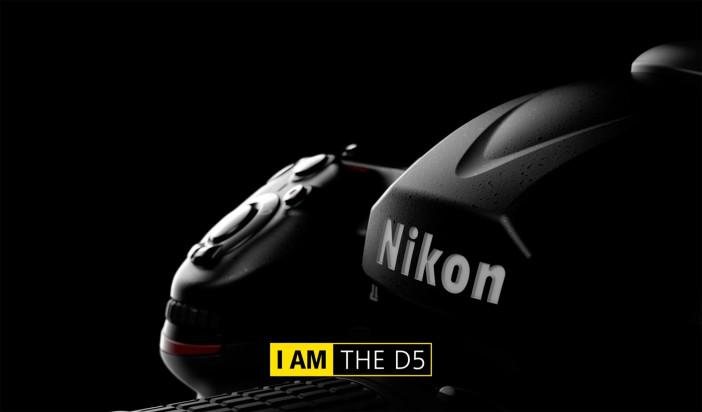 This time it’s a win for Canon. Although it was released nearly 4 years ago in 2012 the Canon 1D C remains superior to the current Nikon D5 flagship for 4K, which I find puzzling because technology goes a very long way in 4 years.

I don’t get the sense Nikon put much effort into video on the D5 and D500, with several excuses lined-up in a row. I am sure they will say it’s mainly a pro stills body used by 1% of people to shoot video as well as stills. The video market is not very important. Although they mention it in every press release, in every brochure and every announcement of course. 4K tagged on like a marketing assignment. I am sure they needed to strike a compromise, a balance between stills and video technology. Although the Samsung NX1 manages to be fast, cheap and good all at the same time. Not to mention the 6.5K sensor readout combined with pristine oversampling for DCI 4K video, no crop and no compromise to stills quality, ergonomics or features.

It’s hard to believe why Nikon with no professional cinema range to protect or segment their other cameras from can F*** it up so massively by failing to put even the most basic of commonly requested video features into their flagship $6500 camera, not even something as simple as focus peaking.

The competition is mounting up. Although the Leica SL also shoots 4K from a Super 35mm crop in this price range, I get the sense they have not just listened to filmmakers but actually understood the information! The SL has a proper 10bit HDMI output and the mirrorless mount also offers a degree of flexibility completely lacking from the Nikon F mount. The 4 million dot EVF is superb for shooting video through and you can’t do that with the D5’s optical viewfinder for obvious reasons! Although the build quality of the D5 is superbly robust and it’s a different class of camera aimed mainly at sports and wedding photographers, the fact remains that the gem-like craftsmanship of the Leica SL will win the hearts of many videographers.

Also puzzling is that even technically the D5 compares so poorly to most of the competition for 4K video in the consumer market, let alone the pro market. Although Nikon have a decently performing ‘flat’ image profile onboard (like on the D750 and D810) the camera still lacks a true professional LOG setting like the one found on the Sony A7 series cameras and the Canon 1D C. Technically speaking the crop meanwhile is a further embarrassment as is the dated 8bit codec. Even Samsung can do a 6.5K full pixel readout on their $1500 consumer camera, the NX1, thus avoiding any reduction in field of view. For Nikon to do this at 20MP was arguably easier than Samsung doing it at 28MP, as the lower the resolution of the full sensor the less bandwidth is required for the readout.

As the Sony A7R II shows when a good image processor is utilised to oversample 4K (8MP) from a higher resolution 5K (15MP) sensor readout, the quality of the Ultra HD goes up not down, so for Nikon to say that the crop results in the best image quality is pretty misleading. Panasonic was using this 1:1 crop technique on a 16MP sensor 2 years ago on a consumer camera, the $1600 GH4. That Nikon have only just caught up on their flagship camera is far too slow a response. 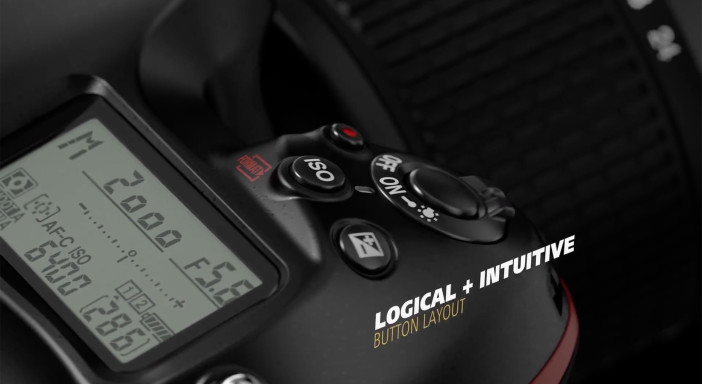 We’ll wait and see what their other 2016 cameras have in store for video but I’m just not really sure they are in the position to offer anything unique over what we have already from Sony and Panasonic. Nikon must get real and start doing their research properly, first and foremost by asking the right people and not just those who only ever agree in order to sweeten their relationship with the manufacturer, or put their names to workshops and sponsored shooting opportunities. These people will never give bluntly honest feedback or shout Nikon down when they have made a mistake. Only independent filmmakers and the enthusiast video community will judge the situation in the cold harsh light of day.