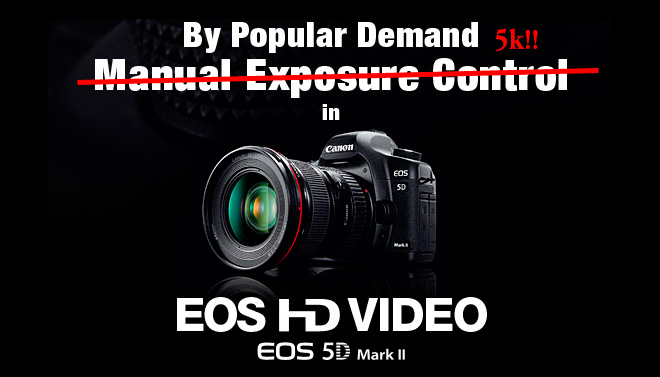 The full frame sensor and 5K are the biggest technical innovations of the current era of digital video, but which makes the biggest difference to the image?

Should we all be upgrading to 5K and clamouring for 4K on our APS-C DSLRs?

Or will a modestly upgraded full frame 5D Mark III 1080p video mode be more significant for the image?

The Sony A77 is the first consumer DSLR to do 12fps continuous shooting in stills mode. It delivers 24 megapixel RAW frames. Halve the resolution to 12MP but double the FPS to 24, and the data-rate stays the same although more CPU work has to be done to scale down the image cleanly without line-skipping. This does however illustrate my point that consumer hardware is not far off the 13.8MP 24fps needed for 5K video. They’d need better heat efficiency of both the sensor and image processor, more buffer memory and a slightly faster CPU but they are close.

Right now of course there isn’t a DSLR capable of it so 5K is not mass market or affordable, but full frame video is because of the 5D Mark II.

8 years ago as an aspiring filmmaker you could get a lovely Panasonic DVX100 or Sony PD150 which had 3CCD sensors for better colour and low light performance, 24p and far more manual control than a El Cheapo MiniDV handycam. Today the gap between consumer tech and the top end is much narrower and yet filmmakers are still rushing to upgrade and spend cash on cameras when their main investment should be in lenses, locations and ideas.

Now because Canon have very sadly decided not to capitalise on the 5D Mark II’s success in the video market for nearly 3 years now, people are beginning to see their upgrade path as a move away from full frame DSLRs to Super35 cameras like the Sony FS100, F3, F35 and S35 RED EPIC.

For some these cameras are great investments but it is strange that many aspiring filmmakers are aspiring to more expensive cameras when they shouldn’t be doing. It seems arguments for technical superiority are getting more arcane by the day… 10bit, S-LOG, grading, codec. It’s a far cry from the days of either having a real cinema look or trying to fake it completely!

Let us assume that when its long over-due release finally comes, at the very least we’ll get a 5D Mark II updated to modern standards. Basically a GH2 with full frame sensor. That means cleaner scaling, true 1080p, no line skipping, very little moire, greatly reduced aliasing and a modern long GOP codec with b-frames. HDMI would be improved for monitoring, no drop to 480p or blank out when you hit record.

Take this (currently hypothetical) full frame DSLR and pick up a 5K digital cinema camera with a S35mm sized sensor. Shoot with them both and I’d say that the aesthetic of a larger sensor would be a much more noticeable factor in the image even on the big screen.

There’s a reason medium format cameras designed for studio portraiture have such large sensors. For portraiture, wide angle lenses distort facial features because of the way they exaggerate depth. So for your ears would appear further away from your nose than they actually are! On the GH2 for example with it’s smaller sensor, 14mm is a wide angle. To do wide angle portraiture on that lens would be a disaster in terms of depth distortion.

With a 40mm lens on medium format, faces would look more attractive and yet the field of view would still be wide meaning you can position the subject more cinematically in the frame, involve more of the surroundings without faces looking like Pinocchio.

A large sensor also brings those surroundings closer and allows you to shoot in confined spaces with the camera closer in to the subject. It’s a similar deal on 35mm full frame and a 28 or 35mm on the 5D. But on a Super35 sensor it is not until 18mm that you’d consider the field of view wide, and 18mm has all the complications described above like with the 14mm Lumix pancake.

I love how the 5D Mark II can bring forwards the background whilst maintaining a wider angle. You can see that with House. With the crop factor of Super35 or Micro Four Thirds over full frame 35mm, you’d need a much larger distance between camera and subject to fit them in the frame without resorting to a wider angle. 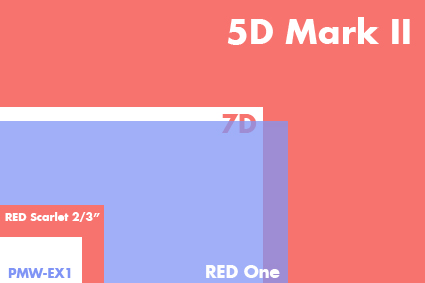 There’s a 6K full frame 35mm version of the RED EPIC and a medium format sized EPIC 645 planned (at least according to the entry on Wikipedia here). In those cases you can have your cake and eat it! But these cameras aren’t here yet and they certainly won’t be mass market.

There’s also a EPIC 617 on the Wiki list with a 28K 168 x 58mm sensor. For reference the standard EPIC is 30 x 15mm! I have heard nothing else about these cameras and I have no idea when we’ll see them. There was a rumour last year of PhaseONE digital backs having live view, and hence video – but the products have not yet materialised either.

So the full frame sensor of the 5D is currently the biggest available for aspiring filmmakers.

So which is best?

Right now most of your audience will watch your stuff online. There’s no getting away from the fact that the internet and the computer screen are the great levellers of video cameras.

However artists often like to have in their work an element of future proofing and there’s no denying 5K looks sharper on the big screen than 1080p. The question of whether 4K and 5K will work in the home however is something Sony and Panasonic need to debate themselves when it comes to selling future TVs. There’s probably a reason 3D ‘superseded’ 1080p in the marketing brochures instead of 4K.

YouTube has gone 4K but only for reasons of prestige and experimental intelligence gathering. They want to see what impact it has on bandwidth and server requirements if and when it becomes the accepted standard for video delivery online. I just don’t think it will, not unless people up and down the land suddenly find a way to fit 65″ screens in their bedrooms. Can you imagine persuading your girlfriend?!

Currently it is far better for most filmmakers to aspire to a good selection of lenses and a full frame sensor than to gravitate toward 5K. It is also better to be patient and wait for the Sony full frame DSLRs with video and to see what Canon does with the 5D Mark III.

It is just a shame that Nikon, Panasonic and Canon seem so intent on chasing the low end mass market rather than developing new flagships. But that’s where the profit is.