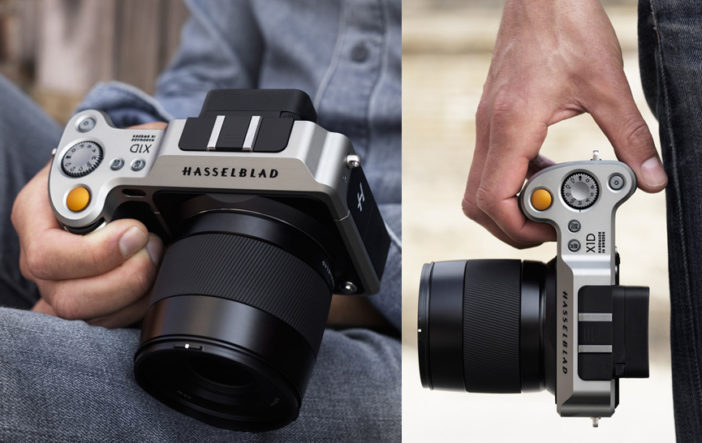 Today the Swedes introduced a medium format mirrorless camera, proving that a 44 x 33 sensor can in fact be compact, in terms of both the body and lenses.

However the camera goes without the 4K RAW mode of the recently introduced H6-50C system with similar Sony 50MP CMOS and the H6-100C (100MP sensor). (Unhappy face).

There’s an old adage, if you give a man a fish he will eat for a day. If you teach a man to fish, first he’ll need to buy a fishing license, but he doesn’t have any money, so he’d have to get a job and get into the system, pay taxes, and now you’re going to audit the poor guy. Turns out he owes $10,000. Then the bailiffs arrive and take away his fishing rod, tent and stove. They’ll pass the information onto the department of health & the environment who are concerned about the stove, because you need a permit for an open flame in the countryside and they start asking him questions – Would he dispose of the paper plates in an ecologically sound manner?

Which brings me to patents.

Patents are probably the scourge of progress in the camera industry, but I don’t know because I just want to eat my damned fish and I really don’t want to have to learn how to design my own fish, learn how fish patents work, genetically modify the fish so that it’s something more interesting, like a fish-shaped underwater 4K camera, only to realise I didn’t have the patent for “Aspherical lens in fish mouth”, which in the ensuing legal battle bankrupts me.

But consider where full frame is at now for stills and video.

The best one, the Canon 1D X Mark II and the quality of the images it produces is nigh identical to the 5 year old camera it replaces, yet with the product cycles so long for the 1D series, by the time it is superceded, Canon’s flagship full frame camera would have lacked a significant increase in stills quality for more than a decade.

5 years after the original 1D X, the dynamic range is the same, low light performance is even a bit worse and resolution practically identical. Indeed, even when it comes to 4K video, the cinema orientated version of the 1D X with the same sensor, the 1D C, shoots better quality moving images and came out nearly 5 years ago.

Meanwhile, in the cinema world we don’t seem to be any closer to a codec that competes with RED’s compressed RAW format, the key point being that RED own many, many, many compressed RAW patents.

A further example of stagnation – the Arri Alexa came out in 2010. Nobody has really beaten the dynamic range of the damned thing, SIX years later. The Alexa’s sensor employs a patented dual gain architecture to each pixel. To prevent the lows and highs getting clipped in a standard 14bit sensor readout, Arri have a patented technology that uses dual channel A/D converters on the sensor – one that prioritises the shadows and one that prioritises the mids and highs. The data is then merged to form one 16bit raw image with enormous dynamic range, one in which the full range has room to breathe in terms of skin-tones and colour.

Of course dual-gain analogue to digital conversion must surely be the next step for DSLRs and mirrorless cameras, but how do Canon, et al get around their lack of fishing license?

Hasselblad have realised this early.

Mirrorless cameras, the associated technology and medium format are the logical progression of upscaling current camera technology, a progression that a patents war won’t stop.

Canon file a lot of patents but having lived in Berlin for a while now, I understand why the Germans might have beaten them to it.

What I really want is a 16 stop dynamic range medium format sensor with 4K raw video, and Hasselblad / Sony are offering it with the H6-100C. It is hands-down a more powerful imaging tool than any full frame system.

The Hasselblad X1D-50c, which I am sure you can read about all over the web now, is not at the moment very appealing for video. It’s just a way to get rather plain 1080p from a medium format sensor without a mirror in the way, but the video features look far too stripped-down for filmmakers and the pricing is obviously nonsensical versus a dedicated cinema camera like the Sony FS5.

But it sets a direction.

While Arri hold the patent keys to the dynamic range kingdom, the option of enormous pixels to work around the issue, as seen in the astonishing dynamic range of the X1D sensor and Pentax 645Z is a solution which really could ‘change the game’ if paired with a capable 16bit raw codec.

It’s also noted that the XD1 is part of a new system, the X platform, which will surely be expanded in future to encompass other cameras. Hasselblad have banished the memories of the Lunar and other Sony-rebadging jobs that were frankly beneath the brand, but will they take things a step further in future and create a Hasselblad Cinema line based on Sony sensor technology and Hasselblad optics? Or a 4K shooting X system camera at a Sony A7R II or even Leica-SL rivalling price? I do hope so.