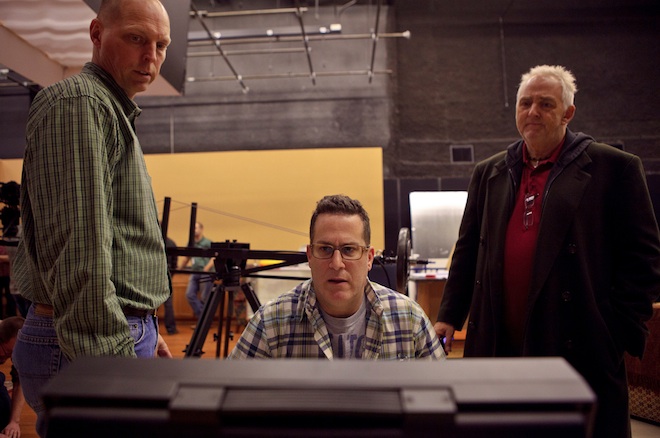 The Revenge Of The Great Camera Shootout is Zacuto’s antidote to pixel peeping camera tests. It airs June 15th online, but preview showings have been taking part around the world. It aims to show how any camera from the very top (Alexa, Sony F65) down (to the iPhone) are viable filmmaking tools. Whilst I agree with Steve that creativity is overlooked too often and gear gets all the attention, I wouldn’t go quite as far as Steve in claiming the camera does not matter. The camera and lens – like lighting, like set design, like a location, like actors – has an aesthetic quality that goes into the production and heavily influences the mood of the film. I would use anamorphic lenses as my trademark style, because I feel that particular ‘brush stroke’ suits my kind of filmmaking, helping to create the moods I want. So yes, the camera matters in my view!

In the shootout, the Arri Alexa was operated by “24” director of photography Rodney Charters, ASC. Also tested were the Sony F65, RED Epic, Sony FS100, Canon C300, and Panasonic GH2 (with Quantum v9B hack) and Canon 7D with CineStyle. All the footage was graded in post by each team.

This comes from the South Australian screening in 2012 of the new shootout.

Shot in February 2012 at Tribeca Flashpoint Academy in Chicago, cinematographer Bruce Logan ASC acted as administrator of the tests. A series of three identical shots with colour / lighting / dynamic range challenges was set up for each camera. The DPs for each camera were then given the opportunity to re-light the set under strict parameters to get the very best out of their cameras.

The scene was basically domestic indoor living room with people arriving for a relaxed meeting. A large window provided a test of dynamic range (buildings across the road). The same scene was repeated for each camera with the camera tracking closer to show skin tones of the two main actors (white female and black male). No one test set-up can do it all, and this one was intended to compare the cameras in an overall, big-scene evaluation. The screening was in several stages with a break for discussion in between. The audience needed to formally evaluate their preference, guess which cameras when the scenes were repeated without naming which camera was used. I won’t rank all of the cameras as I saw it (and it was a very subjective evaluation for all in the audience) but just make a couple of comments:

The Sony F65 and the Arri Alexa were, for me, in place 1 and 2 respectively.

The pleasant surprise was that place 3 was the hacked GH2. This generated much discussion and even some crusty old pro’s were very impressed by the GH2’s image quality.

RED Epic, C300, F3 and the FS100, for several reasons, were competent but did not overly impress me… or many others going by the general discussion. As someone else commented, it’s quite possible that the color grading was more responsible for this than the cameras per se. The C300 colors were poor (with a greenish cast) while the blacks on the RED Epic were crushed. The F3 and FS100 appeared somewhat “bland” for lack of a better term.

At the bottom was the Canon 7D (again several people expressed their disappointment)… and the iPhone. The color grading of the iPhone image “deserved a standing ovation” as one audience member put it. I agree. For what it was the image was decent (no one was laughing by the end of the show)… and I think better than the HDV I shot with for several years.

Technology is indeed leveling the playing field. All of the acquisition was acceptable and it was not an easy job trying to rank most of the cameras.

I was also interviewed after the screening and went on record as saying the hacked GH2 was bettered only by the F65 (lovely image) and the Arri Alexa. I stand by what I said.

You will be able to see the shootout for yourselves in a few weeks when the final public version is released on the web…but it won’t be quite the same experience as seeing it on a large screen.

After reports back from various people that I know that have seen it, the GH2 was done justice – and went beyond expectations in a way that made a certain very famous filmmaker pick it as his choice of image.

I have not yet seen the new Zacuto 2012 shootout (it airs online 15th June) but I use the FS100 and 5D Mark III now alongside by GH2. I have to say they all have their strengths and weakness and special purposes on a shoot, especially full frame. I prefer the full frame look when I am doing a close up portrait shot. I’m surprised the dated 7D was used in the shootout rather than the full frame 5D – to show what kind of creative purpose it has on a real set like in the shootout, what practical purpose it has and what the aesthetic of a full frame sensor gives to your movie.

Steve Weiss is critical of too much camera talk and traditional pixel peeping camera tests, but these are important for filmmakers and especially aspiring filmmakers on a low budget – who must buy a camera and stick with it. It makes sense to choose the right one based on the way the image looks for the price, as well as the feature set. In a way it is like consumer advice. It isn’t to be sniffed at as it saves people money and stops them from making costly mistakes when it comes to gear.

I prefer the GH2’s aesthetics for many things – it really is the great all rounder. I’ve given it the most attention on my blog because of that. But it needs good glass (like the Voigtlander Nokton 25mm F0.95) to shine. With a fast aperture you get the Super 35mm look. Stop down and it is like Super 16mm. The Lumix lenses are in my view a bit clinical and lifeless so I tend to avoid them.

The FS100 certainly has the best handling of the 3 (after you get used to the scatter dash button placement) and was a pleasant surprise in that regard. The FS100’s codec is also far better than expected, better than both the 5D Mark III’s new ALL-I codec and more gradable. It doesn’t fall apart easily despite being just 24Mbit in 24p mode. AVCHD is underrated – both the GH2 and FS100 hold up beautifully in post. It is also nice creatively on the FS100 to have 1080/60p for slow-mo and such incredible low light performance. On the downside the image does sometimes look a bit digital, it lacks an ALL-I (intra frame) mode for more cinematic motion and the noise grain on the GH2 is finer, more film like. Right now price wise it is a no contest, at between $600 and $800 the GH2 is the best value digital cinema camera in the world. It will be interesting to see what the 12bit raw for $3000 Blackmagic Digital Cinema Camera will be like next month, though it has a smaller sensor than the GH2 and FS100 – so make sure you stock up on fast EF mount glass to maintain plenty of depth of field control and performance in low light.