These past days I’ve been trying to make myself useful to Alex at Magic Lantern, testing the DNG raw video recording on the 5D Mark III with a nightly build of Magic Lantern.

Here’s what the video quality looks like in the DNG video modes at 30fps. 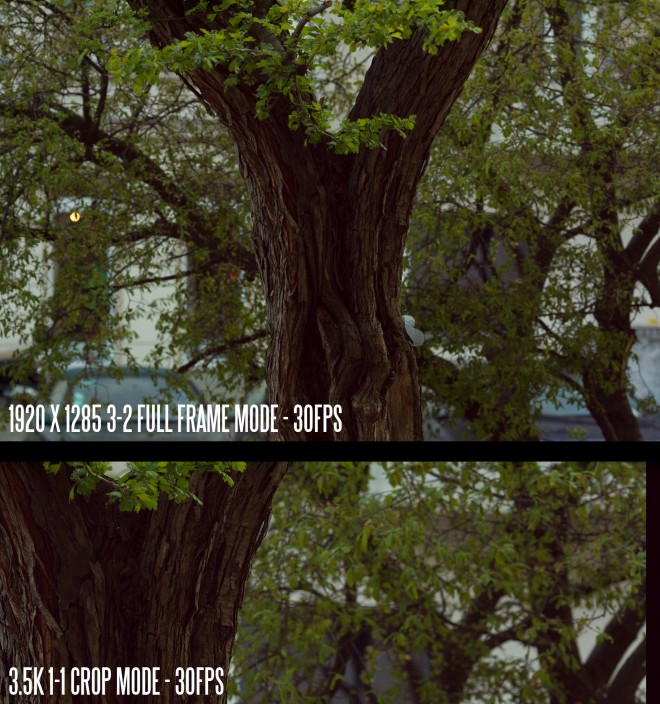 Image quality wise no matter what the resolution in DNG, it is a HUGE step up from the current H.264 video mode or HDMI in every way – sharpness, detail, dynamic range, grain, colour, roll off, smooth gradation, you name it.

It is still an actual resolution increase on the current video mode because the detail is so finely resolved in raw mode and so soft in the current H.264 1080p.

3.5K mode (a 1:1 crop of the sensor) is lovely, but the frame sizes are just too huge (9MB) for an SD card to handle at frame rates high enough for motion pictures so don’t hold your breath for it! Also as you can see from the video in this mode jello is a big issue with handheld footage!

As you can see from the framing in the picture above, 3.5K crop mode samples just over half the sensor horizontally and 1320 pixels vertically. There’s currently a black band on the far right in this mode but that can be chopped off in post.

With the Magic Lantern build I have and the 5D Mark III set to 720p in the movie mode menus, the camera outputs very clean 1928 x 670 raw frames too but my 670p is squashed vertically and need to be shot with an anamorphic lens attached to correct the distortion. The distortion is actually helpful in that respect, saves you having to apply a squeeze in post when shooting with the Iscorama. I believe they have 1920 x 720 working with no distortion but have yet to get this working on my version.

By turning the in-camera CR2 raw recording off and putting JPEG recording on Medium or Small, I can get up to 2 seconds of continuous raw recording on the 5D Mark III at 1928 x 670 and just over 1 second of 1928 x 1285. That is 50 frames of raw video for 1928 x 670 in a burst of up to 30fps and up to 30 frames at the full 1285p. As a timelapse or photographic burst mode it is extremely useful even in it’s early bleeding edge form, very much like the Nikon V2 mirrorless camera but lower resolution.

Above: click to enlarge the 3.5K sample frame (downsampled to 1920 and converted to JPEG)

The short recording time is limited by the size of the camera’s buffer. When the camera dumps the frames from the buffer to the card, it seems to debayer the raw frames for the image review causing the whole process to dramatically slow down. We need real-time recording of DNG to the card for all this to work as a video feature.

Magic Lantern have got the image review working which gives you a live preview of footage as they are slowly written to the card. This debayering is in my opinion very CPU intensive and I think they’d need to find a way to turn it off.

The debayering method used to produce the live view image and H.264 is less CPU intensive but of course results in a very poor image, the source of the soft video we have on the 5D Mark III. Then on top of that dodgy facsimile plenty of compression is added to create the H.264 MOV files. With the latest firmware (1.21) we now know what the compression does not really change image quality, as the uncompressed H.264 output via HDMI looks just as rubbish as the internally recorded compressed H.264 (at 24Mbit in IPB mode). 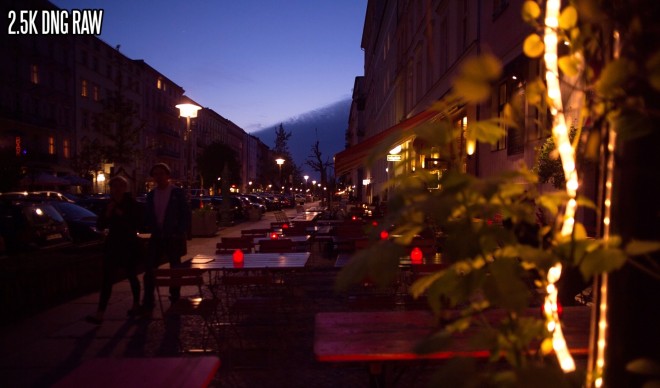 In theory if Magic Lantern can turn off debayering and simply continuously dump raw frames from the buffer at 24fps to the card, then we have continuously recording raw video and are not limited by the size of the buffer (512MB). The buffer also has to store other stuff, not just the DNG files hence the low number of frames it can store at once before it becomes full.

Writing raw video to the card is not processor intensive, but has a very high date rate.

So the next big hurdle is whether the card – and more importantly the card controller of the 5D Mark III – are fast enough to get that uncompressed DNG raw video out of the camera’s buffer in realtime.

My tests say that in theory yes they are fast enough!

Magic Lantern has an internal benchmark that writes a block of data to the card with the card controller. In the 5D Mark III I got sustained 75MB/s write speeds to my 1000x compact flash card which I used in the 1D C to record 4K MJPEG. Not only is the card capable of that rate, but the internal card controller seems to be too. This part was upgraded in the 5D Mark III to support newer UDMA 7 cards. 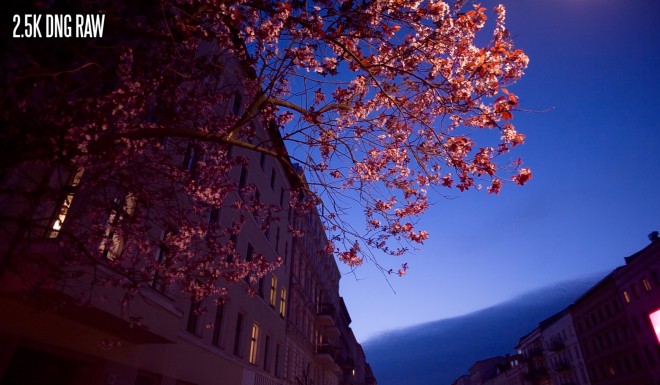 Uncompressed 1920 x 1080 raw is around 120MB/s to the card, and on the Blackmagic Pocket Cinema Camera with 2:1 compression it is 60MB/s. Compressed raw doesn’t seem to be a realistic option at this point on the 5D though. The Blackmagic Pocket Cinema Camera does 2:1 compression on its DNG files but it does so with dedicated hardware for the task. Magic Lantern’s DNG module runs in software. It is C code on a general purpose processor. I very much doubt that it has the performance to do complex compression on 2K raw files at 24 frames per second, and if it can do that, your camera will probably explode.

Rather than compress 1080p an anamorphic style 2x crop to 1920 x 540 would produce raw video at 60MB/s, perfectly within the benchmark score for my 1000x compact flash card.

However rather than the camera’s card write LED flickering continuously as the DNG files are written to the card, it does a very brief flicker for each frame and then the camera thinks about something else for around 1 second per frame. With the Magic Lantern card benchmark, the LED flickers manically and continuously.

Could this delay be due to the camera debayering the raw file for image review on the LCD? Hopefully Magic Lantern can find out what the camera is thinking about, and either turn it off or dramatically speed it up. Whatever it is, it isn’t yet a continuous 60MB/s stream of raw video frames to the card, and needs to be if we are to get it to work for video.

As well as a faster card controller than the 5D Mark II the other major advantage of the 5D Mark III is that the raw image appears to be downsampled much more cleanly from the sensor. The DNG raw files have a lot of false detail evident on the 5D Mark II, whilst they are silky smooth and pin sharp on the 5D Mark III. Here’s an example of the difference (at 1:1): 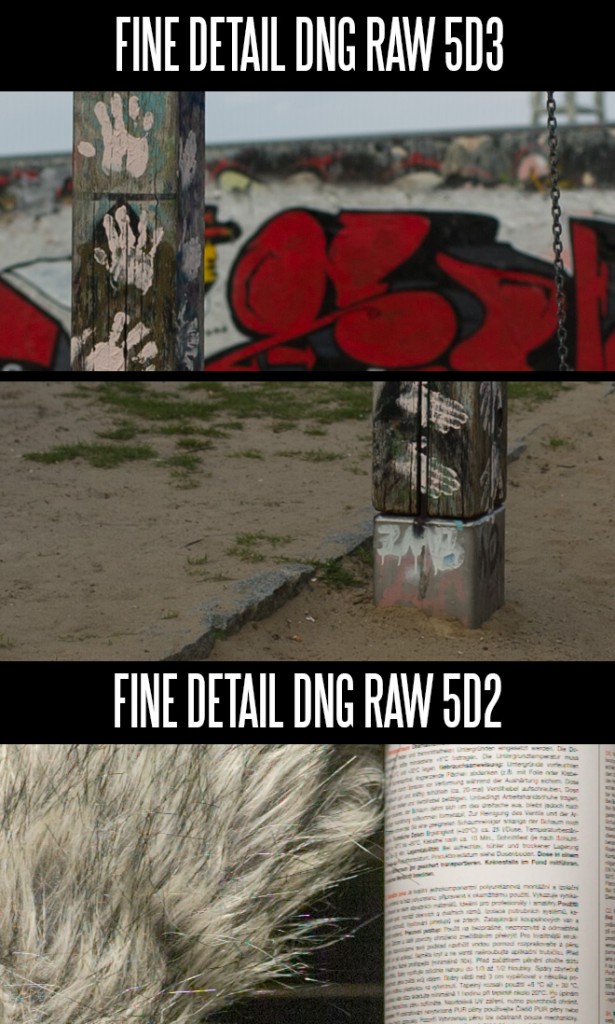 As you can see, there’s a lot of red, blue and green errors on the 5D2 DNG raw with fine detail, it has a very scratchy look and now smooth at all. I put this down to the 5D Mark III doing 3×3 pixel binning on the sensor and the 5D Mark II line skipping over the sensor, producing more false detail – though some very good sources have told me it IS possible to get good quality with nearest neighbour downsampling – essentially the same as skipping lines 3:1 on the sensor to get 1080 lines from 3840 less a crop to 16:9.

The 3:2 aspect ratio 1928 x 1285 frames are 4.8MB each and appear to have around 11 stops of dynamic range. Detail is cleanly rendered and tack sharp, none of the same moire or aliasing issues we usually see. It has less moire than the Blackmagic Cinema Camera too, yet is much cleaner in low light and with a full frame sensor.

The 3.5K frames are activated when the sensor is put into focus assist mode. With the 5x magnification active on the live view display, the 5D’s sensor does a 1:1 crop of the full frame sensor at up to 30fps continuously to the buffer, measuring a huge 3592 x 1320. The aspect ratio is similar to shooting with a 2x anamorphic lens on a 16:9 camera sensor, and I have actually grown to like that look a lot.

The crop however comes from a very oddly positioned window on the full sensor, it isn’t centred. When the focus assist box is moved with the joystick from the far left to the far right, Alex has noticed that it pauses very briefly in the middle and speculates that the sensor changes the windowing mode from the left to the right. As it is, framing a shot in this mode is currently very difficult as the live view display only shows a very narrow (roughly VGA) crop of the much larger 3.5K sensor crop resulting in a very extreme magnification of the full 3.5K image frame, which was after all how it is designed to work (as a focus assist)!

Thanks to an EOSHD forum member’s advice in the Nikon V1 60fps raw burst mode topic I was able to get a very quick and simple raw workflow with the 5D Mark III going.

Rather than use DaVinci Resolve (which only works with TIFF sequences and Cinema DNG, not plain photographic DNG sequences) I used After Effects to put the sequences of DNG frames together into video clips.

Ctrl-I brings up an import dialog box and you simply put each sequence of frames into it’s own folder on your drive, now they act like short clips. Choose the first DNG frame in the folder and After Effects will allow you to grade it in Photoshop, before applying the look to the rest of the frames in the sequence automatically as if it was a video clip.

Then I exported each composition to a lossless Quicktime file, and dropped that straight into Premiere. Of course there’s no audio recording to a separate WAV file yet with Magic Lantern so have the dual system audio recorders at the ready.

All in all the recent Magic Lantern developments have left my jaw on the floor, both with amazement and with bafflement at how Canon can leave out such valuable features. If this team of programmers who have had zero assistance from Canon and zero insider knowledge can put a DNG burst mode of 30fps raw into the 5D Mark III, you have to wonder why Canon didn’t put one in themselves and it is only natural for me to question this, as I am sure everyone else is doing!

Actually we shouldn’t be too harsh on Canon. Although they could have done it at the drop of a hat but didn’t, I don’t think there’s a conspiracy. I believe the issue lies with the economics of the camera industry and the consumer. There are drawbacks for the regular customer – support requests from people with slow SD cards would go through the roof and add to Canon’s overheads if they put the 30fps raw burst mode in there. Sensors might fail due to heat build up and the reliability of the camera might be effected long term resulting in more returns under warranty and the huge implications for Canon’s reputation that could bring. Jello is an issue  in the crop mode, though I’m surprised there’s not a 1080p H.264 crop mode since the 600D has it and the sensor on the 5D Mark III is clearly capable of it.

However as we have seen time and again, whether it is with the GH2 hack or Magic Lantern, we are being given a very small subset of features compared to what the hardware can offer and it really is time this situation was improved. Power to the people.