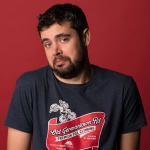 I don't want to come across as being self-serving with this, but I work at one of the retailers that received pre-release firmware to test on the GH4. There are "reasons" V-LOG-L is not part of the v2

​Thanks for posting Daven! I am hearing it will be weeks not months before the firmware comes out for V-LOG.

Honestly I think some people need to either cough up more cash or quit whining so much and learn the benefits of patience.  VLOG will come out or they wouldn't be beta testing it now with these guys.