A big thanks to Ciecio7 for donating his superb OCT19 to E-Mount lens adapter for this shoot. This is available on eBay.

We shot this with the young German movie actress Lili Zahavi (IMDB) and theatre actor Niklas Brubach. A big thanks to both of them for their performances. This is a music video for my fellow friend from Manchester “Herdwhite” whose track Dreamleaver was recorded here in Berlin.

The Sony FS100 has a nice image but it isn’t as organic as the Blackmagic Cinema Camera. To make it more organic you use organic lenses. Actually as Herdwhite would tell you it is the same with music. You can use a drum sample – but it is not as organic as a real drummer. Anamorphic gives you instant production value if used well. 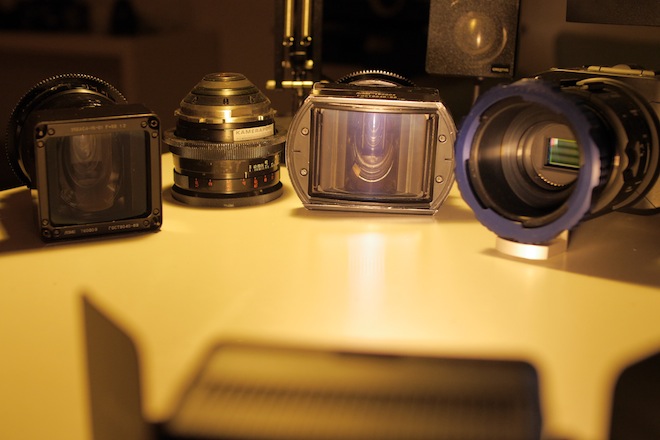 A few months ago I was loaned some LOMO anamorphic lenses to try out (thanks to Volker and Christine). Partly as an experiment to test the lenses we shot this!

LOMOs can be soft, can be distorted, can vignette, can be hazy and low contrast. It is the imperfections that make them organic.

Thankfully you also have a choice on what image you want. Stop down for sharpness and more contrast – OR shoot wide open for a dreamy look.

I place anamorphic lenses right up there with 24p in importance for the fabled ‘film look’, with the cinematographer at the top.

They add depth to the image. Normal lenses aren’t as immersive.

In this video there is a mixture of real anamorphic, cropped cinemascope and standard 16:9.

Not very consistent, no. But I refer to John Brawley’s matte box in my defence: 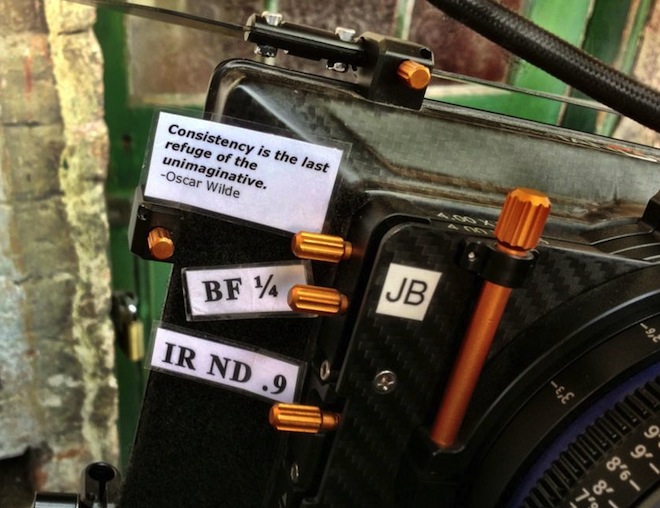 The summer and interior scenes were 90% LOMO anamorphic but since we lacked a practical enough diopter for very close focus, I chose to use an aspherical lens for that and a B-cam, which was the 5D Mark III. A game you can play when watching the video is – can you tell which shot is a genuine anamorphic and what is cropped to 2.66:1?

The dream sequence benefited from standing out in style, which it does already in terms of the locations – but I wanted something extra. Black and white? Not all of it because I enjoyed the green tones of the grid. Vignette? Well the 18mm T1.4 already has a slight one. So my decision was to experiment and we shot aspherical in standard 16:9 with the rest in 2.66:1.

16:9 may seem too ‘normal’ for a dream sequence but since the rest is anamorphic, it stands out like a 1:1 square frame would in a 16:9 video. 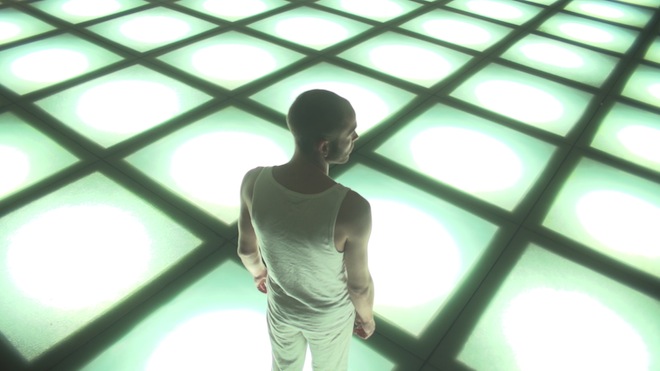 In this video you can see what an anamorphic lens adds to the image over standard aspherical – that extra cinematic production value. It isn’t about the flare, rather the whole composition. I do have some rare LOMO diopters but no decent way of fixing them to the square front anamorphic, once I find a way they will be straight into a shoot.

We had a number of real-world challenges shooting this video.

For the summer scenes (and the ‘summer’ of their relationship) I wanted the magic hour sun, but you really need to chase it. The angle of the sun changes very quickly so you can’t hang about, for continuity of shots gets thrown off. You can do one scene and in 10 minutes the sun will be completely different. A nightmare and no wonder Terrence Malick takes 20 years to do a film!

In handling some partial nudity and the privacy of our actress we had the camera set back from the rolling in the grass scene and also an outside the window perspective on the bed scenes. In both cases this was a more discrete place for the camera and viewer to be – but it makes you more curious for more, which adds a tension. In the editing process it is important not to show too much. One of the most powerful things in film is sex – it is like a weapon. We cut an entire scene and idea we had from the final version because it was explicit and that changed the tone of the video to something else. 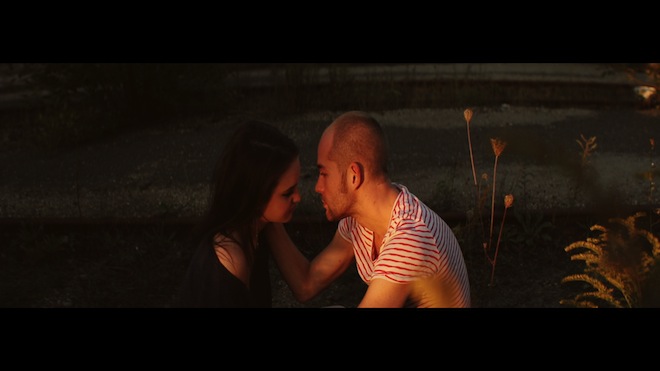 I find with too many music videos and films either you get so much that you are numb to it throughout the film and nothing is shocking any more, or you get it cut out to achieve a wider box office reach and the whole thing feels flat and neutered. It is all about balance.

We didn’t storyboard the video, as a result I found it very productive to edit whilst the photography was still on-going. We only had around 5 days shooting but at the end of the each day I assembled the edit, to get an idea of how it was coming together.

As well as mixing the aspect ratios I purposely broke another rule… A LOMO anamorphic has a 2x horizontal squeeze which makes for very dramatic bokeh. This should result in a very wide letterbox of 3.55:1 ratio when de-squeezed in post from a 16:9 camera like the FS100. But this stretch factor seems to change depending on what focal length you have the lens set to. A LOMO anamorphic is not ideally what you want to be racking focus with!

The Iscoramas are better because they don’t breathe at all – or change the stretch factor from close focus to infinity. I found in post that I preferred the look of a gentler squeeze on the LOMOs – to around 1.5x or 2.66:1 rather than the full 2x and 3.55:1. So if any forum troll says I have f**ked up the aspect ratios – I say… Art is generated by the soul not by numbers. 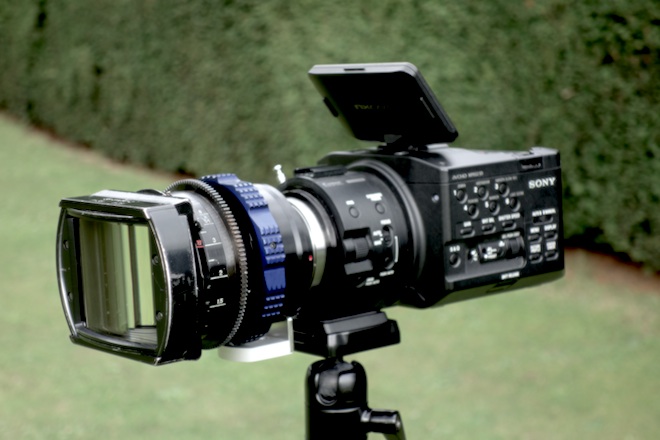 Ciecio7’s OCT-19 adapter seen above in blue made this shoot possible. Very robust, superb design and build quality. This is available on eBay.

As with many artists in Berlin we didn’t have a budget for this music video, Niklas and Lili very graciously just delving into it and bringing our ideas to life. Having a zero budget also means seeking out public locations which are enclosed enough to be like your own personal film set. Berlin is great for this. The locations are really important.

We only used 3 or 4 but they all have their unique look and nobody lurking around in the background dressed in bright red shorts, stripy t-shirt and hipster sunglasses to ruin a shot – apart from me! For some of the higher angles, we didn’t have a crane. So we bought a couple of work bench legs from a DIY store and a wood table top, to really elevate the tripod. It made a hell of a lot of difference to some of the shots. Sometimes a DIY solution really works for the image and that for me is all that matters. 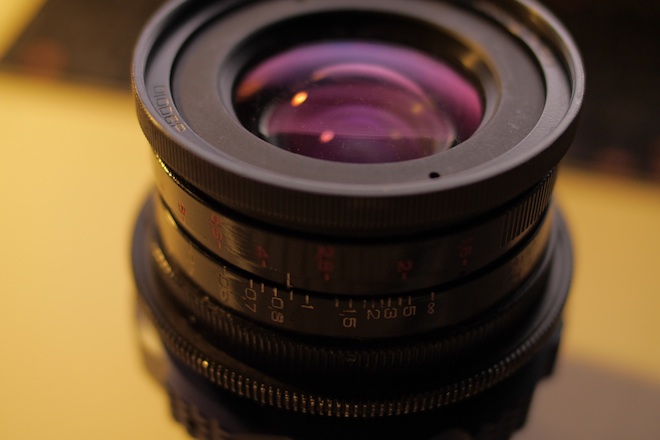 The LOMO 18mm T1.4 is unusual. On the FS100 this really is a proper fast wide. It was designed for Super 35mm in the first place. The modern cinema lens equivalent of an 18mm T1.4 (Cooke S5/i or Zeiss) is of course sharper and punchy, but if you have to ask the price you can’t afford it! Not even Google will tell you. (I honestly don’t know, seriously).

Meanwhile there are no consumer or photographic lenses that are this wide and fast. Closest I can think of is the Sigma 20mm F1.8. The Sigma is very good value for money but not a perfect optical performer and not really wide enough, and not T1.4! The better lenses are all F2.8 and designed for full frame. We were shooting in extreme low light conditions on the FS100 with the ISO pushing 8000 and the lens wide open, so we needed that T1.4. F2.8 wouldn’t have cut it.

As for the LOMO anamorphic lenses, they are not without their difficulties. Ideally you need all 3 – the 35mm, 50mm and 85mm. So you need to buy 3 lenses where you only need one Iscorama and 3 standard primes. Though the Iscorama may be very costly, if you think of the number of alternative anamorphic primes you’d have to get for that versatility it is very good value.

The optical performance of the LOMO anamorphic lenses is a real mixed bag. They have soul and flare by the bucketload but big issues with excessive softness, focus breathing and mechanical aspects. The 35mm is also extremely soft at the edges of the frame but sharp in the middle third. Maybe it can be seen to by an optical expert for repair. The 50mm and 85mm I have are unusable unless stopped down to T5.6. The 85mm in fact needs repair because the focus is still off even when stopped down to T11. Distortion on the 35mm is particularly severe and the Iscorama 36 is certainly sharper at fast apertures and has less distortion. It is also a much smaller and lighter lens. But still I persevere with the Russian mistress because she’s beautiful.

Anyway hope you like the video as much as I enjoyed making it. Let me know what you think on the forum and do buy Herdwhite’s music if you dig it. He is a good friend of mine and has been here all along with me in Berlin as we forge our creative careers.