Here is a lens the GH2 has been crying out for to compete with full frame. A good fast wide with more potential for shallow depth of field and low light performance. Indeed it is something the entire Micro Four Thirds system has needed for a while.

It is roughly equivalent to the 24mm F1.4L on a 5D Mark II. That look is probably my favourite look of all camera / lens combinations (apart from anamorphic on the GH2). It is just so cinematic. I much prefer 24mm over 28mm for wides. Trying to reproduce the look on a Sony F3 or Super 35mm camera for the same price is impossible. For APS-C sized sensors there’s only the VERY expensive Zeiss Ultra Prime 16mm T1.9 cinema lens so I’m afraid Canon DSLR and Sony NEX consumer users don’t have anything to choose from yet.

The GH2 gets a truly fast wide angle first on a crop sensor for $499 and that is pretty exciting. 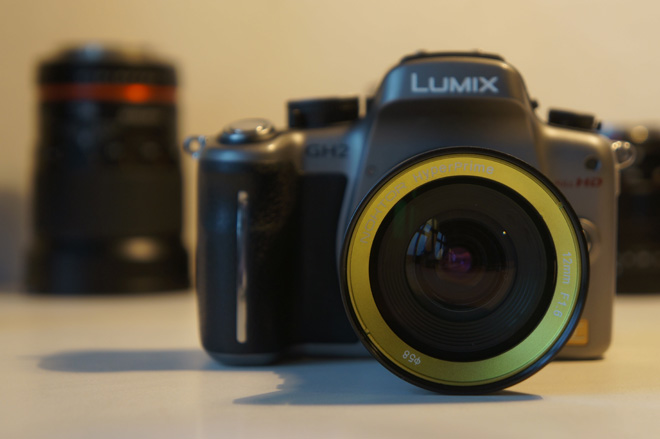 The only other lens with a similar spec is the recently announced (and more expensive) Olympus 12mm F2, also a Micro Four Thirds mount lens. The chunky Olympus 14-35mm F2 Four Thirds is not wide enough for my critical eye and the Tokina 11-16mm F2.8 is just not fast enough. Now you may think the difference in shallow depth of field and low light performance between F1.6 and F2.8 is not much but with such a wide field of view DOF is far deeper than with a 35mm or 50mm prime. Shallow DOF, then, is really is at a premium on wides with anything less than a full frame sensor so you need to push the aperture as wide as possible. That the Noktor HyperPrime focusses so closely also helps to achieve shallow depth of field enormously despite the crop sensor. It is great for close-ups and bokeh is very tidy.

I shot with the lens today in Berlin all handheld with the hacked GH2 (44Mbit AVCHD 1080/24p). You can see the results above!

EOSHD: Is the minimum focus distance really 0.15m? It seems closer, more like 5cm instead of 15cm.
SLR Magic: Yes it is 0.15m from subject to MOS sensor. 5cm is just the distance from the front element to the subject. We did not want to push it further or we will have many broken lenses from getting too close!
EOSHD: Are you on schedule for a December release date and will it be available on eBay?
SLR Magic: December is the release date for EU and US markets. We should have them for Asian markets as well as on noktor.com in November.
EOSHD: The Noktor 12mm feels similar to a vintage 16mm or 35mm cinema lens. Is this lens related to a cinema lens?
SLR Magic: It was designed with a cinematic lens rendering in mind. It is an original design and not an adaptation.
EOSHD: Is it a F1.6 lens or T1.6?
SLR Magic: F1.6 was what our lens achieved in lab test so we rated our lens as F1.6. F-stop is usually a theoretical calculation and most manufactures will not achieve this theoretical maximum. T-stop means what the lens actually achieves and our lens achieved F1.6 in lab test. 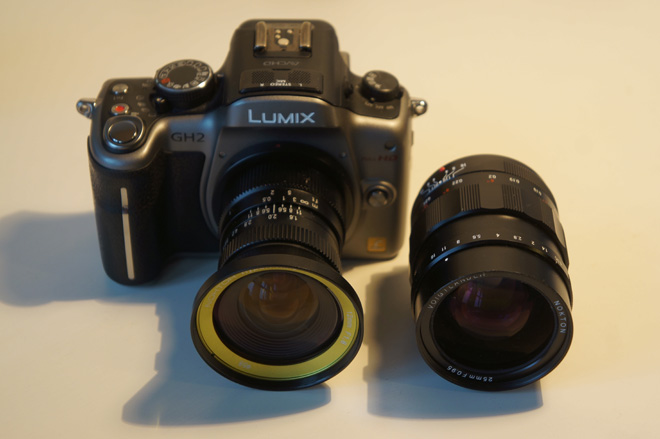 Here it is alongside my Voigtlander Nokton (note N!) 25mm F0.95. Now the Voigtlander is not a wide angle on the GH2 it is a standard portrait lens so they’re not really comparable (just different) however you can see that the 12mm Noktor is not a big lens. It’s smaller than the Voigtlander and similar in size to the Olympus 12mm F2 but with a slightly larger front element.

This is a higher end lens from SLR Magic, NOT a toy lens. $499 makes it cheaper than the Olympus 12mm F2, so far it’s only competitor on any crop sensor DSLR or video camera!

My lens collection (and I’ve narrowed it down to 9 primes and 3 anamorphic recently) has been chosen purely based on my feel for the images that the lenses produce and their creative potential, rather than tiresome shooting of charts and analysing of specs. I strongly believe the most common mistake shooters make when choosing lenses is to look at the charts and specs (how sharp? how technically superior?) rather than getting a feel for the actual images. Lenses should be more artistic than that! There’s so much beyond the usual distortion, flare free image! Character.

That’s why I don’t yearn to buy a ton of expensive L glass. I also tend to stay away from more common modern lenses because by shooting with very common lenses you’re baking the same look as millions of others right into your stuff. This lens has unique cinematic character by the bucket load, something a chart or spec on its own will never reveal. I loved Seb Farge’s footage (below) and I am happy with mine too even though it was shot handheld in the rain! 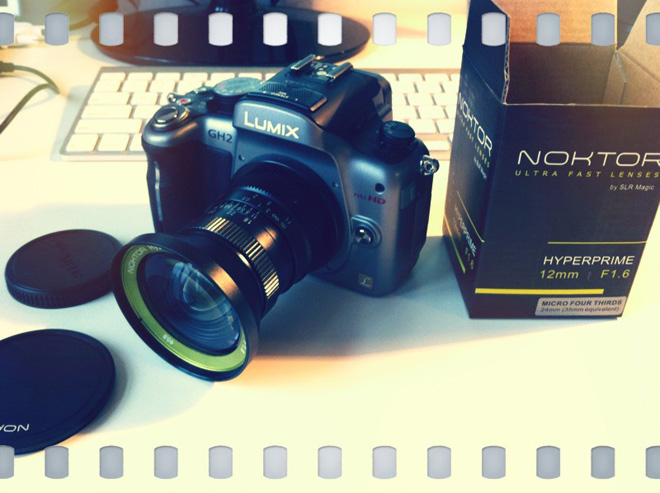 Build is good, all metal and just the right torsion on the focus and aperture ring. The aperture ring by the way is de-clicked out of the box which is ideal for video shooters. It is continuously variable and very smooth, and the iris has 12 blades so bokeh stays perfectly creamy and round when you stop down. (Just like a cinema lens, so it is perfect for the GH2 and AF100).

It also has a depth of field scale. The lens is a custom design by SLR Magic not a modified industrial c-mount.

So far I love the lens but one area for improvement that I can see at this early point is to reduce the amount of distortion which can be quite noticeable on very straight horizontal lines right across the frame. But given how wide the lens is that is pretty much to be expected. I have only had the lens less than 1 day at the time of writing, so it’s too early for an in-depth review or final conclusion so I’m going to follow this post up later in the week with a full review. One thing I’d also like to try to put my LA7200 anamorphic on it (a lens that doesn’t vignette at 14mm – how far can we push it?)

It’s a very exciting time to be a GH2 owner.