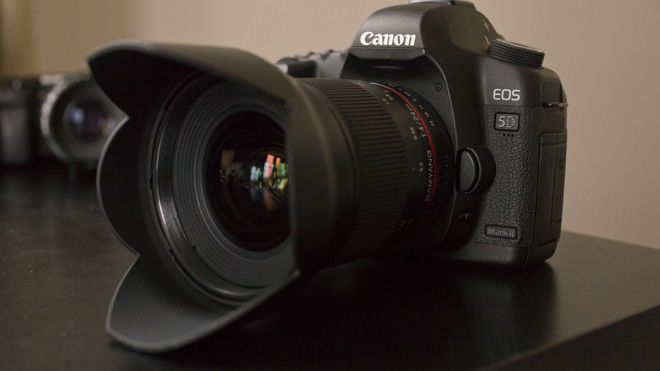 As good as Canon’s renowned 24mm F1.4L? From Samyang? Maybe the title of the lens gives us a clue… AS IF.

In turns out those misguided initials aren’t such a bad omen but the lens – at $850 / £550 has some price competition from the much cheaper Sigma 24mm F1.8.

I am reviewing the Canon mount version. You can get it now from Samyang’s official worldwide dealer based in Europe. The DSLR video version has a de-clicked aperture ring for smooth and silent adjustment during a shot. Both lenses are the same price (for Canon mount).

The first things you notice about the Samyang 24mm F1.4 is that it is quite light for a full frame lens (there are no AF motors) and that the transmission of the glass is faster than other lenses at the same F stop.

The Samyang 24mm F1.4 is closer to T1.4 on a cinema lens in terms of brightness than most other lenses.

There is a considerable difference in brightness when set to F2 relative to the Sigma 24mm F1.8. Below I’ve overlaid a cut out from the Sigma shot on the left onto the same area in the Samyang shot on the right – as you can see the Samyang is brighter by quite a noticeable margin! 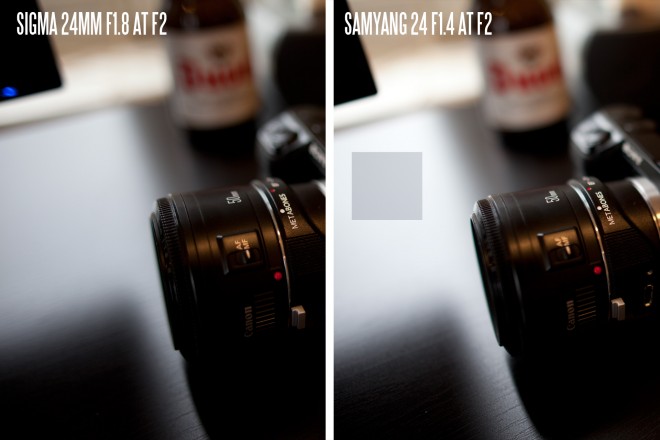 One of my favourite cinematic looks is at 24mm F1.4 on the 5D Mk II. Wider than 20mm is too extreme for my tastes, 28mm not quite dramatic enough. Shallow depth of field at wide angle is never shallower than on full frame. I recommend the Samyang 24mm F1.4 for the 5D Mark II and Nikon D800 / D4. On the GH2 the closest equivalent wide angle is the Olympus 12mm F2 and the (mostly unavailable) SLR Magic 12mm F1.6.

The Voigtlander 25mm F0.95 and the Samyang 24mm F1.4 give a similar feel on the GH2 since they are of similar focal lengths but really the lenses have different purposes on different bodies. The Nokton is an ultra fast portrait lens for Micro Four Thirds and the Samyang a fast wide angle for full frame.

Once again Samyang have produced a lens with Canon L style performance in terms of sharpness and resolution.

In the centre there isn’t much between the Samyang and Sigma but in the corners the Samyang is extraordinary! Big, big difference. 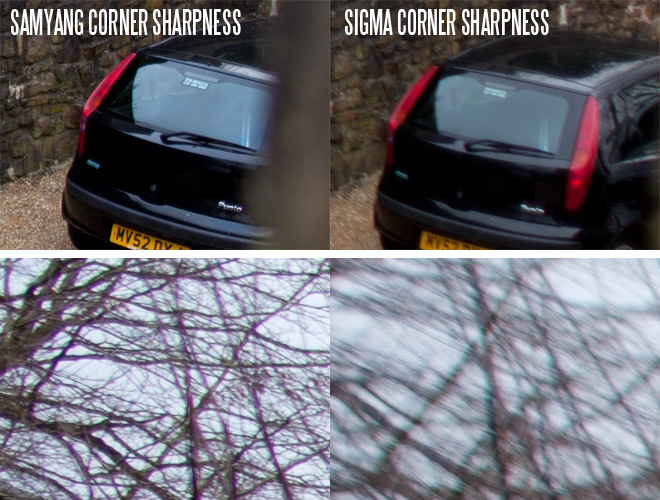 Below is the centre sharpness… The Sigma is pretty good here. F1.8 on the Sigma shows none of the usual signs of a lens being wide open, and the performance is almost identical at F2 which is why that shot isn’t included. The Samyang is softer at F1.4 wide open as you’d expect for F1.4 but has the edge at F2 as well as being brighter in terms of the real T-stop (light transmission of the glass). 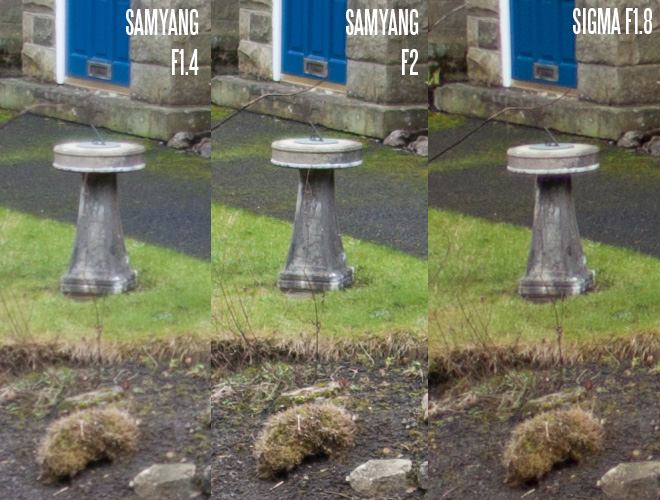 There is however an important factor to bear in mind here.

Soft corners may not be aesthetically bothering for some shots and can enhance the feel of a image. Soft corners and a slight vignette are part of what gives the Voigtlander Nokton 25mm F0.95 such a dreamy look wide open.

With the VAF-5D2 anti-aliasing filter, which brings far more benefits than negatives, you will get very soft corners with either lens, so the Samyang’s advantage is cancelled out. If you don’t plan to use this and you want sharper corners for stills as well, the Samyang definitely has a sizeable advantage.

As you’d expect there is barrel distortion, a little more than the Sigma 24mm F1.8. It is nowhere near as good as the Olympus 12mm on the GH2, but it isn’t bad and most of the time you won’t notice it. But I feel distortion is an area for Samyang to improve on.

Vignetting is slightly worse on the Samyang 24mm at F1.4 than the Sigma wide open at F1.8 but both are very similar at F2. I have to say this isn’t a factor in my choice of lenses. In most normal shooting you will never notice it and the shot below represents the absolute worst case scenario where vignetting would be most noticeable. For me a bit of vignetting and light fall off in the corners actually adds to a cinematic image and all lenses have it at fast apertures. It is unavoidable.

Whist the minimum focus distance is not as close as the Sigma 24mm F1.8 achieves, it is still very good.

Mechanically though the Samyang definitely has an advantage. It feels better with a longer, more precise travel and is better suited to a follow focus.

The Samyang is internally focussing, with only the rear element moving. The front element does not rotate or move back and forth like the Sigma and most other lenses.

Breathing is reduced compared to Samyang 35mm which was pretty bad in this regard. It does still breathe noticeably when stopped down (the background and framing will zoom slightly) but it is no worse than the Sigma 24mm F1.8 here and you rarely notice it unless racking some extremely fast focus changes at F8.

There’s no AF on the Samyang, and this is part of why the price is attractive and the lens is light. However if you are interested in racking focus with an Oki USB follow focus or the Magic Lantern hack, you can only do that with the Sigma.

Coating is improved compared to the Samyang 35mm F1.4 which has pretty crazy flare wide open. Contrast is also better wide open when a very bright light source is in the frame. 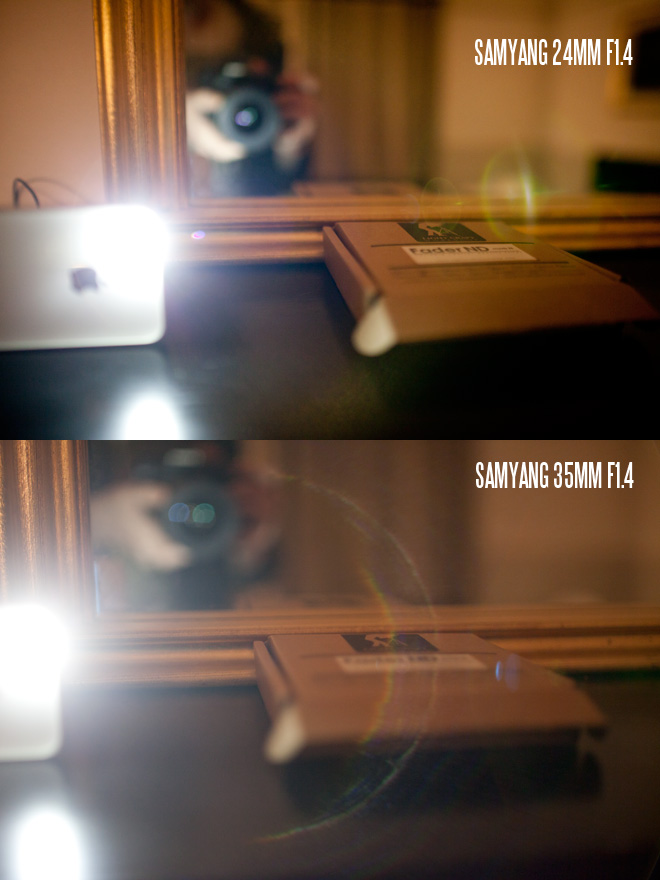 A very good performance – and it needed to be improved to be honest!

If you can justify the Samyang’s extra cost for better corner sharpness, a faster aperture (and t-stop) and don’t mind losing AF then the Samyang is the one to choose. For those who want more of a bargain, the Sigma is the one to get.

There is no doubting that the Samyang 24mm F1.4 is a better lens than the Sigma equivalent.

Affordable 24mm F1.4 lenses for full frame are relatively thin on the ground to say the least so if you want to look above the Samyang you have to step up to the mighty Canon 24mm F1.4L at double the cost.

Is it worth it? Probably not. Though I’ve not tested the Canon and Nikon lenses, the Samyang is so good that it is hard to see what the extra money will get you optically, apart from maybe less distortion and less flare.

So if you can justify the $850 – half the Canon but double the Sigma equivalents – the Samyang is definitely recommended and worth the money. It is a fantastic look on full frame.

The Sigma however, is even more of a bargain if you are…

A) On a budget