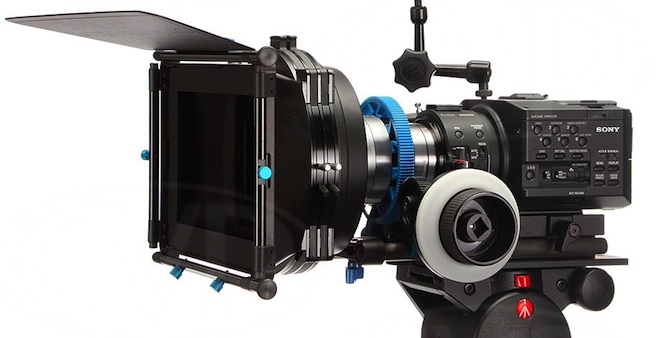 NAB 2012 is a few weeks away. Nobody can be sure what is going to come out of it. May be a lot, maybe not. But one thing is for sure, if you look at the market right now – Canon have a hole to fill. Where is their Sony FS100 competitor?

The Canon C300 is a nice camera but it is priced (and designed) for cinema production and TV. Canon has a Cinema EOS range then… but no EOS Movie or Video EOS. What about the small production companies, universities, Canon’s XF camcorder users who want a large sensor and interchangeable lens mount?

These guys have had to put up with Canon DSLRs for a good few years now. They’ve not got the video features they need on these cameras after 3 years of asking. There’s no peaking, 4:2:2, AF, XLR, slow mo, crop mode, articulated screen, official Canon video accessories, or even proper 1080p.

As a result a lot of them now use cameras like the Sony FS100, Panasonic AF100 or alternative DSLRs that have more video features. These include the Panasonic GH2 (true 1080p, articulated screen, crop mode, AF and zebra), Sony NEX 7 (peaking, slow mo) and Nikon D800 (4:2:2, crop mode and clean HDMI).

Sony and Panasonic are catering for this huge market with the FS100 and AF100. Very popular cameras!

Red tried to do so with the original plans for Scarlet (4k for $4k) but failed and went back to concentrating on high end production stuff. 4k for $4k is definitely still on its way but got distracted by 3D. JVC already have a product which is 4K for $5k.

Compared to the size and worth of this market around the $3000-$6000 mark, the $16,000 C300’s potential is tiny. The Canon XF camcorders are good products but they are a bit last year – small sensor, fixed zoom lens. This along with reliable and fast AF is still needed but there’s large sections of the market which has moved on from these cameras.

In my opinion, the reason the 5D Mark III is not all we hoped for on the video side is not to protect the C300, it is to differentiate it from something we’ve not yet seen. Something big. How else to explain the lack of video features on the 5D Mark III?

So I wouldn’t be surprised to see an FS100 competitor from Canon at NAB. Sharing the C300’s sensor, but dropping the HD-SDI, broadcast codec and robust build quality. It would hopefully still maintain an ND filter, giving it one up on the Sony rival around the $5000 mark.

If the Cinema EOS brand is high end – as I expect it will remain for the Cinema EOS badged 4K DSLR – it would be wise of Canon to give us a new range for the stuff below $6000 that isn’t a stills camera.

EOS Movie would make sense. With Cinema EOS the clue is in the title – those cameras are lower cost alternatives to the Arri Alexa and Red Epic.

The Sony FS100 covers a broader range of bases than just cinema – and so would EOS Movie. Go for it Canon.