Disclaimer: The VG20 could have been running pre-production firmware at the IFA show. If this is the case, clean HDMI and more picture tuning options could be present in the final camera, but other criticisms (like moire) most likely are not addressed.

How does the NEX 5N compare to Sony’s higher end dedicated video cameras?

Well first of all let me tell you that the VG20 is an absolute piece of crap. This is a camera that is meant to sit below the FS100 and is a good $1700 more expensive than the NEX 5N and yet it has a plethora of disadvantages compared to the diminutive mirrorless camera. It brings so little to the party for that extra $1700 namely a top handle and better audio. But in adding those, it also brings massive operational and build quality frustrations to the hapless operator.

The VG20 has just 3 meaningful physical buttons on the body, the other 4 are rather wasted on small things like EVF/LCD toggle and cannot be programmed. You have just one absolutely tiny scroll wheel at the bottom of the camera behind the LCD in an awkward place and it feels cheap and loose. Working with this camera is hell. The 3 meaningful buttons are Iris, Shutter Speed and a button to toggle between AF and MF. You find yourself heavily relying on the touch screen every time you use it, there isn’t even a physical button for the main menu on the camera so to change ANYTHING that doesn’t have a dedicated button you have to delve into the PlayStation style menu on the screen. There’s a button on the top for expanded focus, but you can’t assign peaking to a button! Most shockingly of all there isn’t even a dedicated Gain or ISO button. The touch screen doesn’t seem as responsive as the capacitive one on the NEX 5N either and build quality is exceptionally plasticy.

The EVF is also very poor compared to the OLED EVF add-on for the NEX 5N despite it being a much more expensive camera. There’s no clean HDMI output which you’d expect on a $2200 camera as well. The AF points and REC icon are always displayed on screen as an absolute minimum. 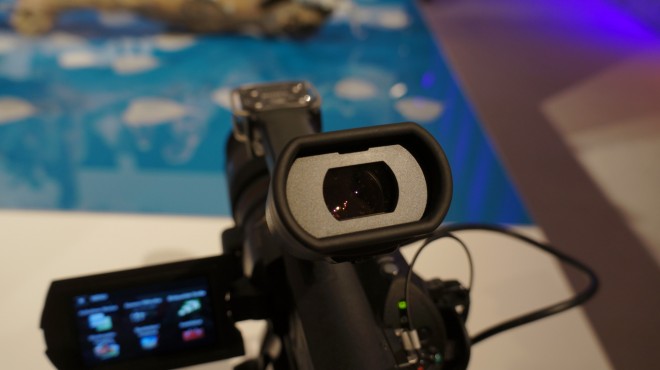 Despite the $2200 price tag and the fact this is a dedicated video camera you get one HDMI port, which tellingly had broken after 2 days on one of the demo models at the IFA. A Sony rep had wrapped tape around the cable to bend the socket back into some kind of intermittant working life. No reinforced HDMI socket or HD-SDI on a $2200 camera is not acceptable in 2011.

For the customer Sony is targeting this camera at – the event shooter and professional videographer – the durability of ports that get used a lot is important. This camera hadn’t been abused. I was told the HDMI cable had some lateral force on it because it had been tied to the security cabling too tightly, bending the HDMI contacts off the circuit board. All Sony need to do is anchor the HDMI port to the case instead of directly to the circuit board. As it is, the port flexes and over time wears out the solder on the port where it joins the mainboard. 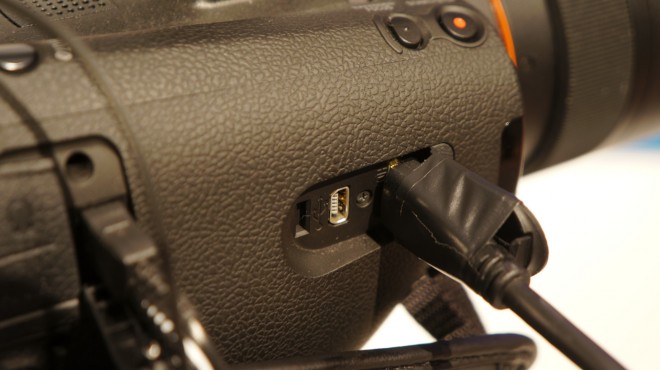 There are also far fewer image configuration options on the VG20 and no Sunset picture profile for smoother gradation. You have CineTone which boosts saturation to an unnatural degree… and that’s it! Yes: fewer video image parameters on a dedicated video camera than a DSLR your extra $1700 – incredible.

Both have a little bit of moire and aliasing. The sensor is identical and so is the image processor. The VG20 does the same stills as well but the form factor is so bulky and unsuited to it I don’t see the point.

The NEX 5N is a great little performer in terms of image quality and the same goes for the VG20 but my goodness you have to REALLY want that top handle and manual audio to put up with the rest of it. Image quality on both are the same from my tests, they don’t show any differences but I prefer the Sunset picture profile and tuning options to reduce contrast and flatten the image on the NEX 5N, you can’t do this on the VG20 – there isn’t even a dedicated sub-menu for colour and image like on the 5N.

Despite who it is targeted at the camera isn’t region switchable either, so if you’re an event videographer that travels you will be shooting at the wrong frame rates under a variety of indoor lights, and will have to match shutter speed to the electricity supply frequency, i.e. 1/50 or 1/60. Then you’d need to buy a good ND filter, because there isn’t one on the VG20 despite it being a VIDEO CAMERA.

The VG20 is a product built for maximum profit from the sensor and circuit board mass produced for the NEX 5N. The NEX 5N parts of it are the best bits, the rest adds nothing and in fact detracts from the main aspects that makes DSLRs so exciting – low price, small size, stealth factor, easy of use. 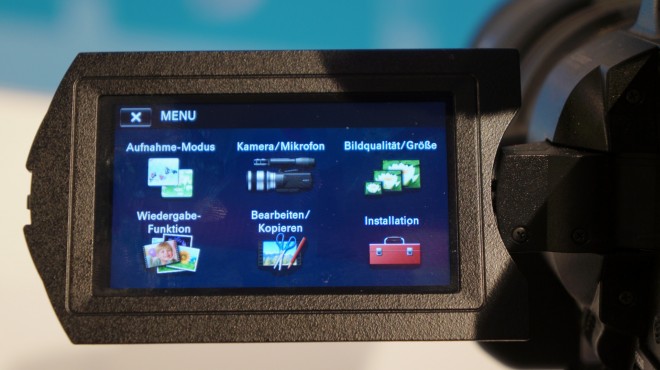 If you think the FS100 has some kind of ergonomic video camera feel going on you’ll be in for a surprise. It doesn’t have any ergonomics!

The controls on this thing are laid out like a QWERTY keyboard and you need to learn to touch type with one before you can even the most basic of things, and still then you’d occasionally need to look at the camera layout because the buttons are so small and close together. They’re also slightly recessed so those with chubby fingers won’t feel a response when pressing anything. It looks like Sony put all the controls in a paint gun and fired it. There’s seemingly no logical design to it. 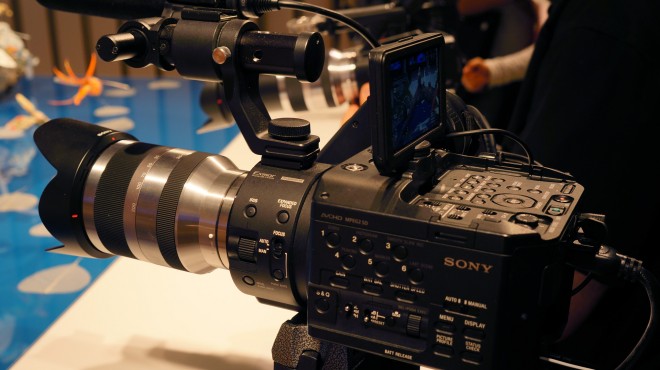 What you get here for your extra money – $5000 extra to be exact – is better image quality in terms of slightly more resolution, less moire and aliasing, better low light performance and more dynamic range. It is rather lovely and the picture contains a lot of information, making it good for grading. It’s just a shame they put it in a silly video camera form factor, what were they thinking!? 🙂

If you’re an aspiring filmmaker who can only afford a DSLR there’s absolutely no real reason to stay awake at night dreaming of FS100 ownership. It’s a corporate filmmaking tool – it gives you all the monitoring options like zebra, all the manual audio controls, HD SDI and a tough build that won’t break when you rent it out. But it won’t get your film noticed any more than a DSLR would, and it wouldn’t set fire to your creativity.

The difference in resolution isn’t earth shattering either. Click to enlarge the split-screen to 1080p. 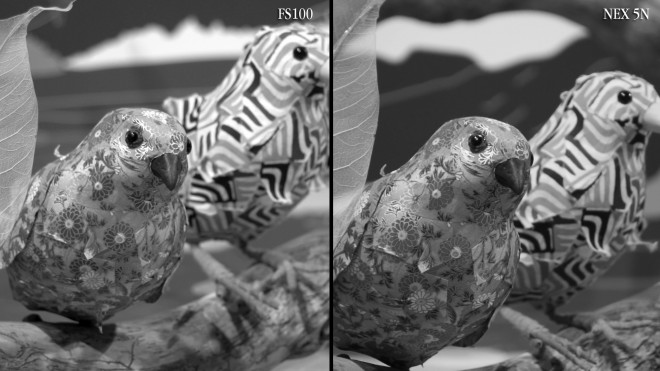 I shot a small comparison between the cameras, in the weird and wonderful world of plastic birds Sony had set up. It was incredibly difficult to match the cameras in terms of colour because they all feature different picture profiles. Video cameras speak in the silly language of Gain in decibels and of course the 5N is rated in ISO. Guess which is closest to cinematography terminology? Gain is a video term not a filmmaker’s one, since 35mm film is ASA rated, similar to ISO on a DSLR. I found that 0db on the FS100 was equivalent to between ISO 500 and 800 on the 5N, and there’s no negative gain so you really have to invest in ND filters when shooting at fast apertures. On the VG20 Gain 0db was more like ISO 200.

I had the 5N set to Sunset with -3 sharpness, -1 saturation and -3 contrast. Couldn’t do that with the VG20. Manual white balance to 4700k on all cameras. I find that recorded footage off the NEX 5N always looks a little warmer than it does on the LCD whilst recording, which is an extra challenge!

Softening the image via the Sunset picture profile helps with aliasing on the NEX 5N. There’s a control quirk on this camera that you need watch out for unless you’re familiar with it. When you’re changing white balance or picture profile settings it’s not enough to confirm WB, you have to exit the menu in the right way too! The ‘reverse arrow’ button doesn’t just back out of the menu after you’re changed a picture profile setting – it cancels your changes. You need to use the softkey in the middle of the dial, the enter key. That is rather silly.

How does the 5N’s video image compare to the ultimate potential of the sensor – 16MP stills? (Same goes here for the VG20). Slightly less dynamic range and information in highlights and shadows and some aliasing but as you can see from the shots below it is a good scaler for a $600 camera, especially when you consider it is doing it 60 times per second. 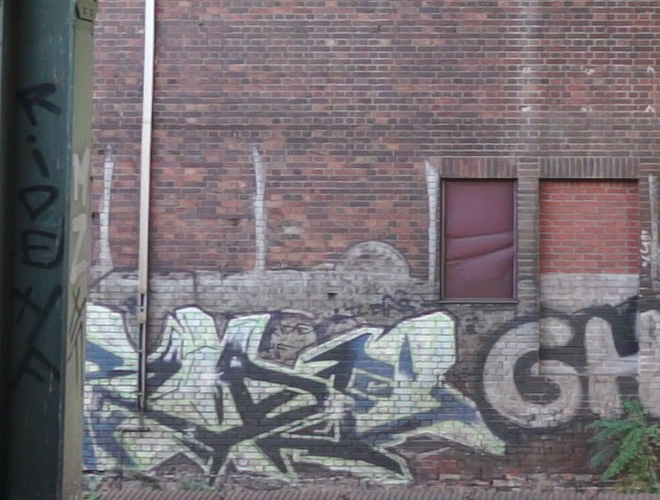 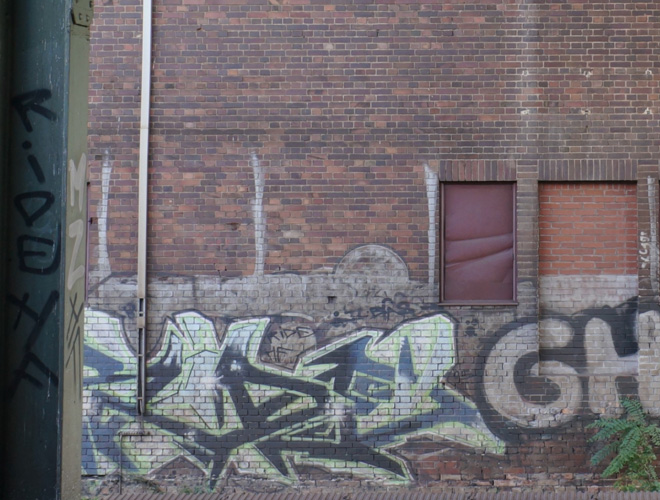 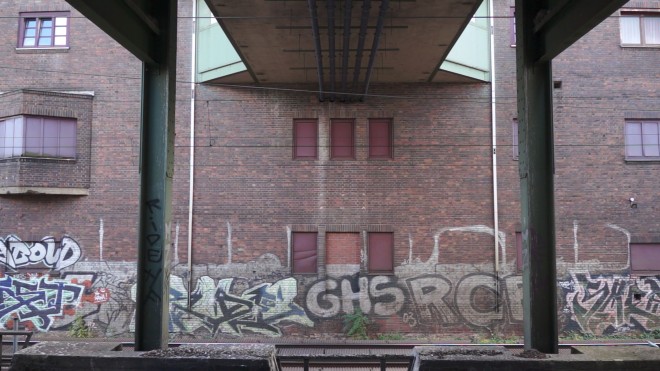 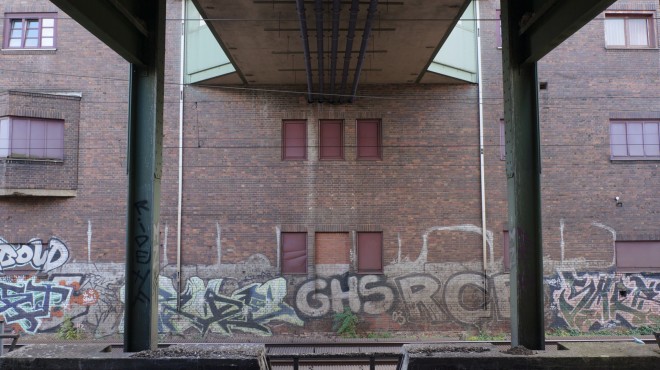 It used to be that the step up from a $600 camera to a pro $2200 one (let alone a $6000 one) put you in a different world in terms of not just image quality but the artistic aesthetics of the image.

Now the DSLRs have all the basics and the large sensor, the aesthetics are the same give or take a bit of dynamic range and resolution to cameras costing 10x more.

If that is not a reason to get excited about the VG20 and FS100, I have another one – Sony did an exceptionally poor job of the ergonomics on both cameras. I just prefer the simplicity and size of the NEX 5N, and it means your rigging can be far more creative, lighter and more flexible. Jared Abrams put the NEX 5N on a rope swing, had he done that with an F3 or EPIC the tree would have fallen down.

Aspiring filmmakers – keep your extra money and invest it in the actors – it will make a far bigger difference to the production than spending it all on a camera body.

The GH2 is still hot

The GH2 is currently the only true hybrid movie stills camera with a high bitrate codec, mic socket and manual audio controls.

However the NEX 5N has a few cinematic traits that the GH2 doesn’t do quite so well. Each trait is VERY subtle but when you add them all together you get slightly more of cinematic feel from the 5N all else being equal.

So how does the GH2 compare?

The 5N is of course slightly softer – that is more cinematic – but it doesn’t quite have the sheer detail of the GH2’s image, or the cleanness. It has a bit of moire and aliasing, though far better than on my 600D.

Gradated tones are smoother on the 5N as is fall off from highlights and it keeps more details in the lows. The GH2 has a contrastier image all else equal.

24p and 25p on the 5N is a little more cinematic in terms of motion blur, it just feels more ‘there’.

But when it comes to bitrate, compression, the cleanness of the image and detail – the GH2 is better. Though cleanness and detail don’t often equate to ‘more cinematic’.

The GH2 has a few more features too namely Ex Tele crop mode and manual audio controls, plus a mic socket.

Between the VG20 and GH2 it’s a no brainer – the GH2 cancels out the advantages of manual audio control on the VG20 and it has the same long clip recording lengths for events. The 5N is limited to 30 minutes per clip but this is unlikely to be a problem for filmmakers.