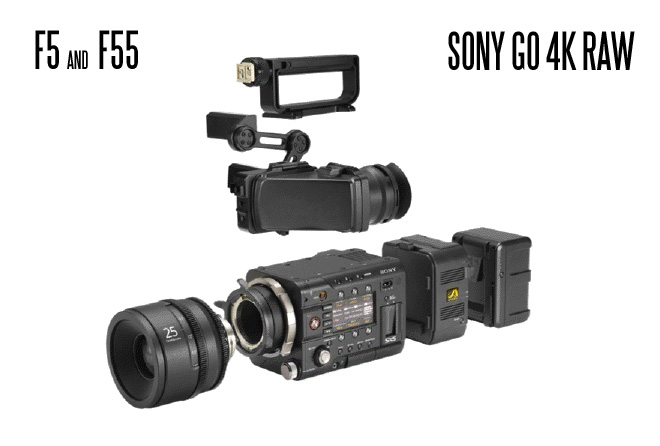 Sony are set to shake up the digital cinema market with a specs war, at less than half the price of the Epic and also at the C300 price point of $15k.

The Sony F5 (priced to compete with the Canon C300) takes the compact form of the FS100 / FS700 but adds a Red-style modularity and the more logical control layout of the Alexa. The F55 has the same ergonomic design but even more importantly the more expensive camera features an utterly ground-breaking new sensor with a global shutter for the first time on a digital cinema camera.

The form factor of both are identical and a big improvement on the FS700.

Both cameras are modular but the F55 does 4K internally. The 4K module for the F5 pictured above doesn’t require a cable, it is fully integrated with the body of the camera. The F5 ships without it so it is HD out of the box. The F55 ships ready to shoot 4K and has the more advanced sensor of the two – Sony have developed a global shutter CMOS suitable for cinema production. The F65 used a mechanical shutter and the FS700 used a digital rolling shutter. With a global shutter any skew, jello or rolling shutter is not just reduced but eliminated entirely.

It will be interesting to see what trade-offs in image quality (if-any) the global shutter mode on the F55 has.

The cameras have around 14 stops of dynamic range (film is 15). 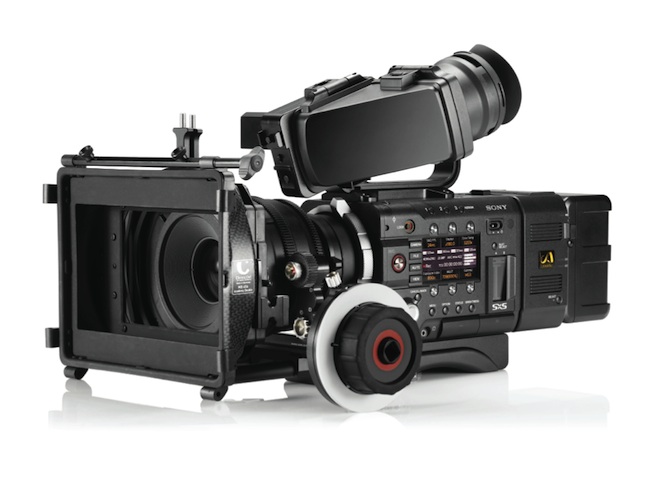 Both cameras can record 4K and 1080p simultaneously to the same card!

4K XAVC is H.264 based but there’s also 16bit 4K raw on the recorder module, similar to the F65 but for much less money. The F55 shares the same wide colour gamut of the F65 too.

XAVC, 4K and the higher frame rates such as 120 / 180fps require SxS Pro+ media or a Sony SSD (the first such model will be 512GB). This media won’t be as cheap as Compact Flash on the Canon C300 of course, or standard SSDs on a Blackmagic Cinema Camera – but it is not yet clear if you will definitely need this proprietary media or if you can use third party stuff. The Sony SSD media plugs into the 4K off-board recorder module, and the camera brain itself features dual SxS Pro+ slots.

The high frame rates are pretty astonishing for 4K and even beats the Red Epic. The F55 does 4K raw at a mammoth 180fps! Start saving up for that archival storage! The off-board recorder can do up to 240fps in 2K mode.

The modularity of the F5 doesn’t stop at the 4K off-board recorder unit.

There are removable external ports (audio / BNC connectors), removable top handle and an interchangeable mount option. Out of the box the mount is PL. Very smart move to make the mount interchangeable. You will be able to use your Canon glass on it.

Another modular aspect of the camera are the LCD and viewfinder. 3 options are available at launch.

… And one more thing

If this wasn’t enough, Sony have also found time to do a new series of PL lenses available as kits in 3 or 6. All lenses are T2.0, metal housing, with focal lengths ranging from standard wide angle to telephoto. So we now have a 20mm, 25mm, 35mm as well as a 50mm, 85mm and finally a 135mm.

Along with the new cameras Sony will announce the long awaited external 4K recorder for the FS700 (dubbed the HXR-IFR5). This also does 4K raw and attaches via a 3G HD-SDI cable. It is a different unit to the F5 / F55 4K module (AXS-R5).

Have Sony finally nailed it?

It seems Sony took a hint from Arri. The F5 and F55 are very Alexa like, right down to the display panel on the side and the controls around it. But the camera brain itself is tiny, less than 10 inches long and far less heavy. Sony have fixed the ergonomic mistakes they made with the FS100 and FS700 – gone is the cheap flip monitor on top of the camera and scatter-dash playback / audio control panel. In terms of modularity, Sony have borrowed from Red – the building blocks shown in the picture above are far more preferable to having cables and spidery arms hanging off a camera body that doesn’t do what you want internally. The 4K module is a great solution for the F5. It allows Sony to sell the HD package at a price competitive with the Canon C300… And even before we get to specs like 4K raw the F5 blows the C300 out of the water. Intra-frame, 120fps, raw, interchangeable mount, the list goes on.

Both of these cameras are incredible on paper. Indeed on the F55 the global shutter betters even Red and is unique on the market. Yet Sony’s price points are far lower than Red and Arri. The high frame rates hint at the kind of processing power and sensor technology Sony have managed to attain here. That they are 4K beasts really should worry Canon, whose 8bit MJPEG shooting 1D C and expensive C500 are no match in terms of specs OR price to Sony.

The Sony F5 will be priced in November to compete with the Canon C300 at around $15,000, and the more expensive F55 is a C500 competitor circa $25,000 (less than half the price of the Sony F65). This pricing info is preliminary and not yet confirmed.