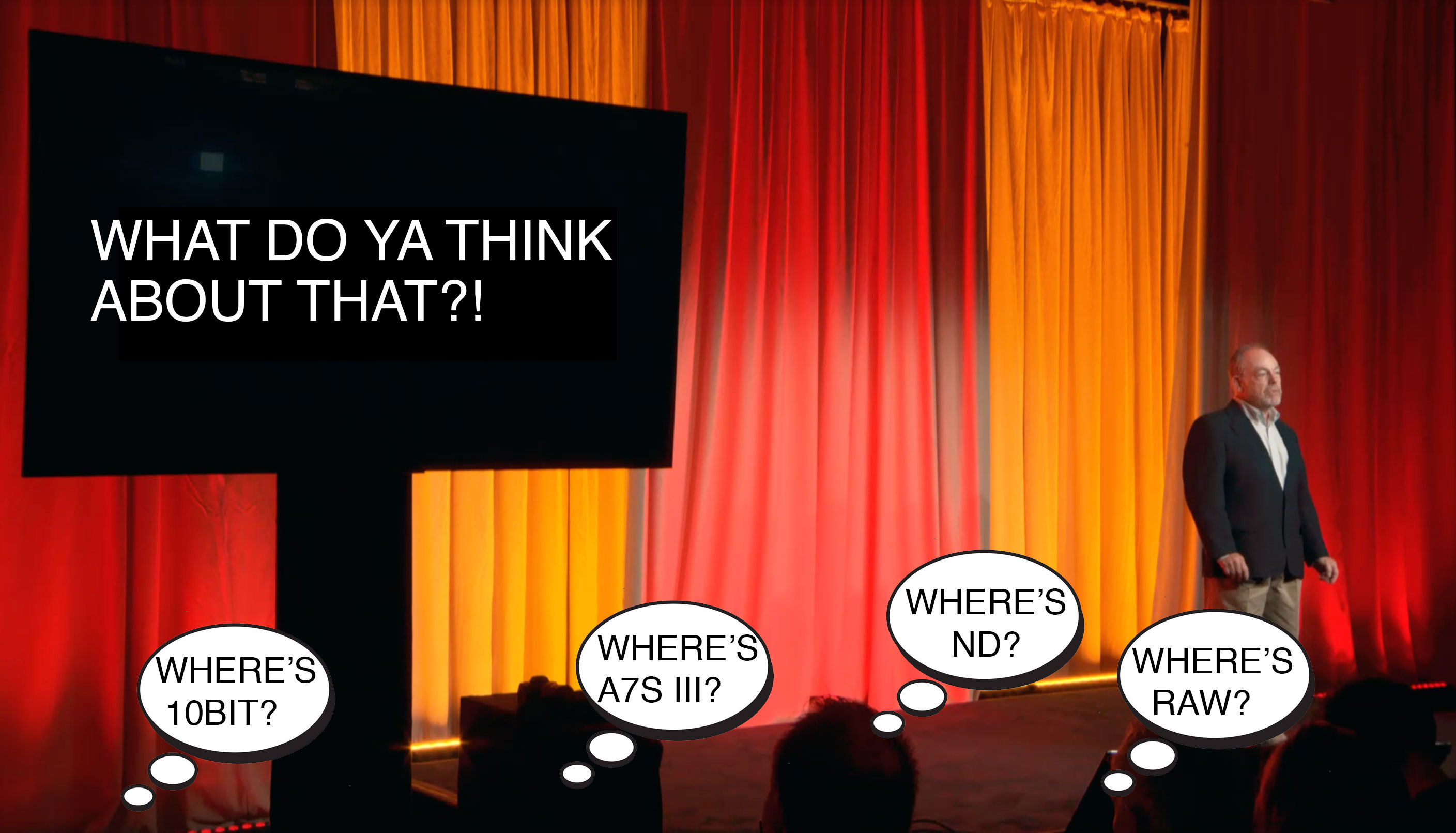 The wait for the A7S III goes on!

The expectation was that the A7R IV would be a Resolution game changer for video. As it happens, it’s more of a RickRoll for hybrid users. 8K is out and the same old 4K is in. As Sony were keen to keep asking in the unveil, WHADDO I FINK ‘BOUT THAT?! I for one, don’t mourn the lack of 8K at all… What is incredible is the complete lack of creative imagination. This is really a corporate entity going through the motions.

So we’re left with a non-revolutionary and unimaginative evolution, disguised in some kind of hyped up numbers game.

In the Minolta days, Sony were sitting on some of the best colour science in the business, clear responsive un-cluttered menus and chunky PRO PHOTOGRAPHER ergonomics, not the Playstation mash-up we have now.

Since then all that has gone backwards (if you don’t believe me look at the default A7S II skin tones vs the Sony A900 of 2009).

Sony’s sensors have gone forward but the camera makes using those wonderful sensors a chore. 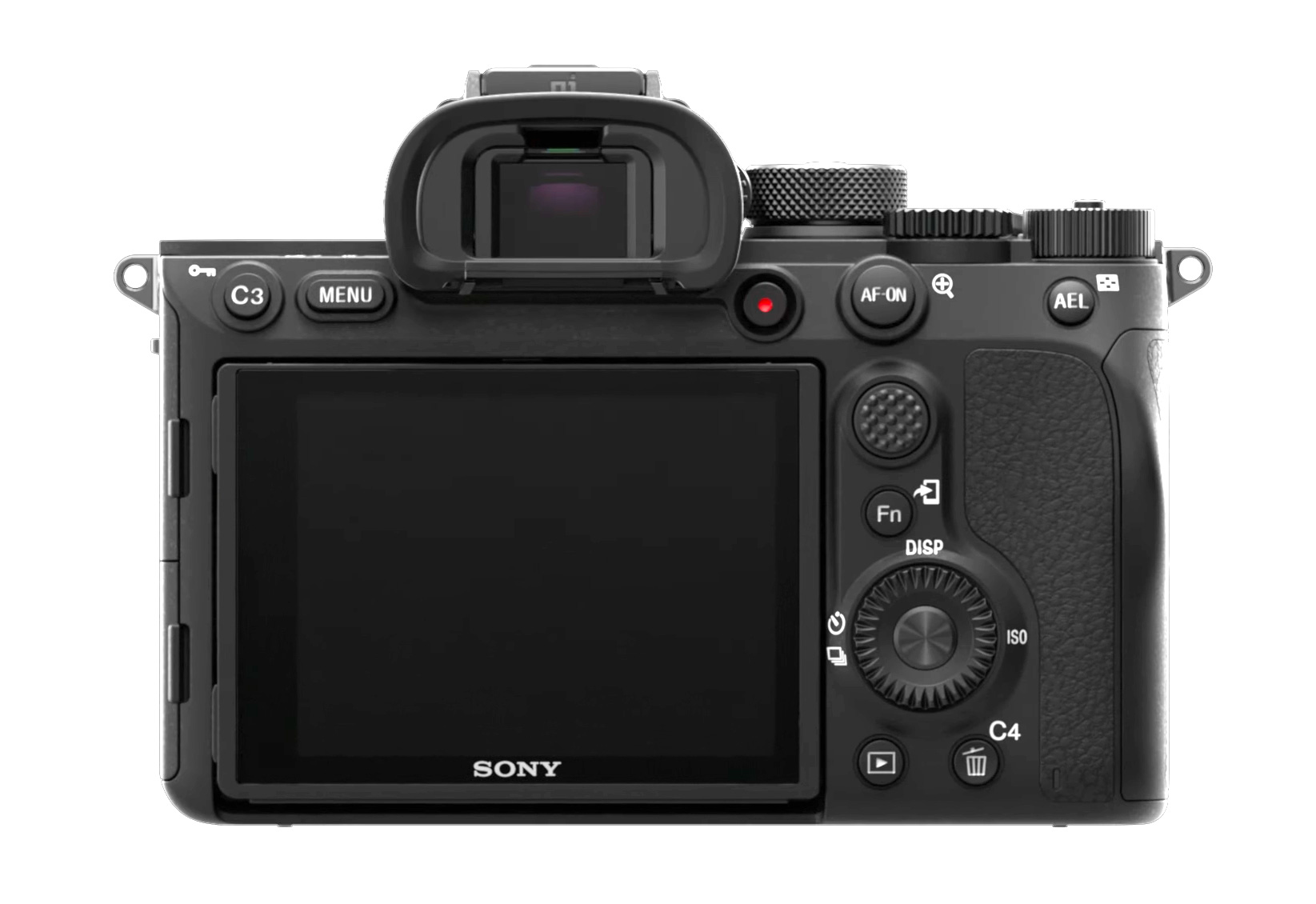 It’s taken them over two years to make the joystick bigger? To put a lock on the EV dial?

As you can see the video button is still in a stupid place. Fancy poking yourself in the eye when using the EVF? I don’t. The top-rear dial is now a top panel dial, to move it up out of the ridge it was behind on the A7R III. Clever stuff, well done Sony! Shame you left the entire left shoulder empty of any drive mode dial!

With the A7R IV about the only thing really new on the video side is the digital audio path into the camera hotshoe. This takes an audio stream from a mic with a built in A/D converter. With certain proprietary Sony mics that means moving the analogue to digital converter and pre-amps away from the noisy electronics in the camera body, which is a “good thing”. It’s also an opportunity for others like Rode to jump in, as long as Sony opens up the audio interface. There will be a built in A/D converter in the Sony XLR adapter too. 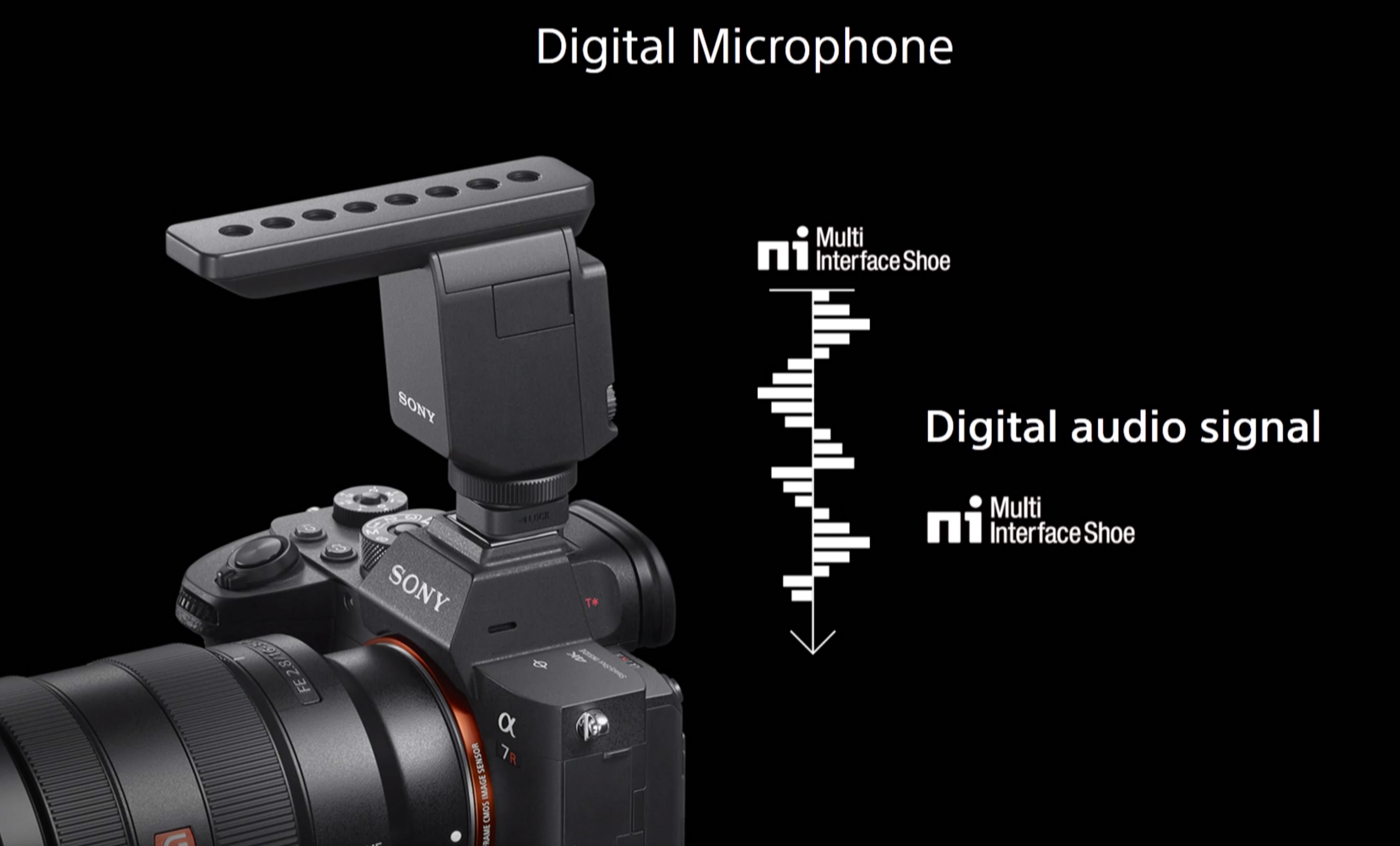 On the stills front, the A7R IV has a new sensor with 61 megapixels but still does only 4K video from pixel binning in full frame.

The Super 35mm mode is now oversampled from 6K to 4K like an A6500 instead of from 5K. Stills in APS-C crop mode are 26 megapixels and the camera has a 240 megapixel pixel shift stills mode for use on a tripod.

What wasn’t mentioned in the presentation:

As Sony hybrid users we really did expect more on the video side from a flagship. No reason to upgrade from a A7R III or even an A7 III.

Sony ran out of imagination but there are some nice big numbers on the box if those are your thing. Personally I don’t need 61 megapixels at 10fps continuous burst with AF.

Eye AF now works in video mode. I thought it already did on the A9. Guess I was wrong?

Sony again claims 15 stops of dynamic range for the sensor. That’s also a big number, but it will be around 12 stops max in 8bit S-LOG 3 and definitely not all of it usable.

There was zero mention of any codec upgrade whatsoever in Sony’s presentation, or HDMI output specs. We can assume it is still 8bit H.264! The camera has Hybrid LOG Gamma as well as S-LOG2 and 3, just like the predecessor. No mention of Venice colour science or anything interesting like that.

It seems Sony are saving the best video stuff for the mythical A7S III. But where is it?

At the moment the A7S series lags years behind. The A7R being on Mark 4 already, which the A7S is only at the Mark 2 stage. You’d have thought they would roughly get updated on the same cycle? It was 2015 when we last had a new A7S. That is nearly 5 years ago. Nobody saw THAT situation coming.

Sony has allowed Panasonic, Fujifilm and even Nikon to jump ahead on the video technology side, with barely any reply.

Yes the A7R IV is a stills camera, with very good autofocus, but so was the last one. Why aren’t they being more creative with the rest of the line-up? Where is the interchangeable lens RX1 style compact full frame camera to rival the Sigma FP? Where is the properly high-end APS-C/Super 35mm body? Where is that FS5-type ND filter glass in the sensor stack? Where are the significantly new colour profiles and where’s 10bit? Where’s 4K/60p? Where is an S-LOG update for the flagship A9?

How about some love for Sony APS-C users? The poor old premium NEX 7 never even got a proper successor. We went to the distinctly cheap A6000 as the APS-C flagship then to the A6300 without any innovation at all aside from higher resolution and LOG profiles. The A6500 didn’t do anything but add IBIS and improve AF, and the Fuji X-H1 and X-T3 are far superior overall.

The A7 III has done very well for Sony and it’s a lot of camera for the money, but it still doesn’t quite hit the mark for me when it comes to image quality and ergonomics. It’s also a camera that killed the A7R III for a lot of users. $3500 for that was much more of a hard sell after the A7 III came out and this new one will be too.

The A7 III forced a race to the bottom price-wise in the full frame market. On the A7 III the codec is old, the EVF is ancient, the feel is digital and colour is accurate on a chart at the expense of nice in the real world.

If Sony are to continue to grow, they need not just to listen, but to get creative.