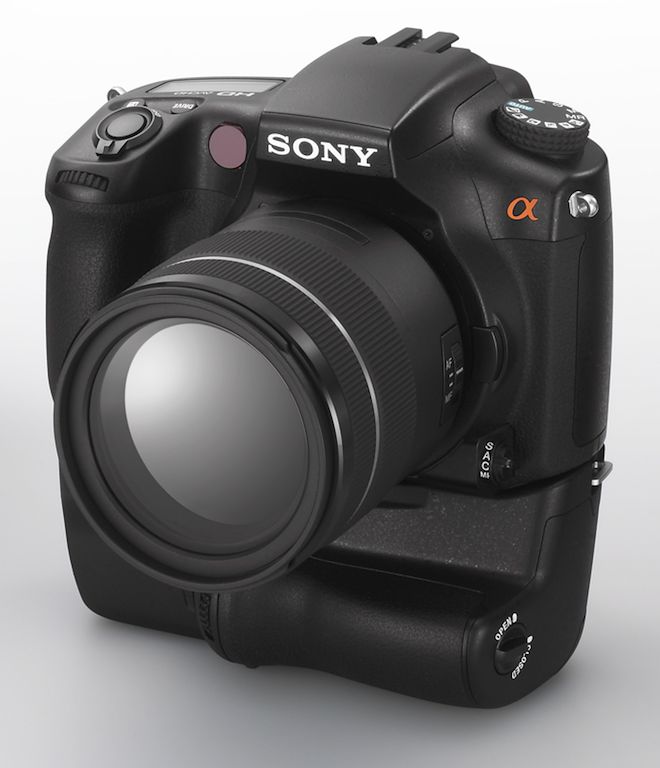 Sony are set to unveil their next generation of high-end enthusiast DSLR – the A77, successor to the Alpha A700. Is Canon about to get some competition in the APS-C video DSLR world? Rumours suggest the A77 soundly beats the 7D, 60D and others – even the GH2. Lets explore what next month’s 7/7 announcement of the Sony A77 will deliver…

Currently the most featured packed video DSLR, with the best resolved image is the GH2, although it cannot match the look of a fast wide angle lens on the 5D Mark II. Second best are the Canon APS-C DSLRs but they are strong on manual control and 24/25p – critical features for professional use. So far Sony have not really had a video capable high end DSLR but that is about to change.

Their mirrorless offerings and mid-range DSLRs lacked 24p and the manual controls to trouble Canon and Panasonic, but more strangely even the NEX-VG10, a dedicated large sensor camcorder with an RRP of $2500 lacked 24p.

The A77 is a ground up rebuild featuring the cutting edge of current 2011 semiconductors, and unlike the NEX-VG10 is not built on $300 mirrorless compact system camera hardware.

So far Sony’s technology has been very exciting but they have not had manual controls in video mode. If Sony are EVER going to change that then the A77 is the first model that really could have it. It is an enthusiast offering with the highest level of creative control in Sony’s range. I can understand the NEX mirrorless not having manual control, but the A77 should have it. It will also be interesting to see what improvements to video image quality come from better processing, and whether Sony will fix the 25% crop of the NEX video mode (which was due to an electronic stabiliser kicking in, that typically with Sony could not be disabled!)

Sony also need to dump the interlaced format. Their interlaced video fetish seems to be linked to a desire to sell more TVs. By far the dominant standard of HDMI input in TV land is still (bafflingly) 60i, even though LCD screens by their very nature are progressive.

Interlaced must die but for some reason Sony seem reluctant to drop it. Sony’s main mistake was to believe the focus groups and consumer electronics people telling them that 24p was a ‘jerky’ look and not cinematic, so Sony also embrace 30p more than Canon or Panasonic do. They believe ‘smooth’ video is a better aesthetic.

Interlacing does reduce rolling shutter though, as you can see from the GH2’s interlaced mode relative to its 24p mode. It allows a faster vertical scan of the sensor.

Hopefully the issue will get solved when 1080/60p becomes more common-place. 50p and 60p convert well to 25p and 24p. I really like slow motion too. Importantly you would have a choice between 24p and smoother 60p. Sony’s new compact the HX9V does great looking 1080/60p although they made a rather silly decision to bump the megapixel count up to 16MP from 10MP on their BSI CMOS sensors, ruining the recent gains from all that nice BSI technology. R&D money in one end, out the other, with no increase in image quality. Well done Sony!

So to summarise – interlacing, 30p and high megapixel counts are the by-product of poor marketing, and not taking leadership of the market and forcing customers to adopt and understand better images.

Sony have shown A77 prototypes in a translucent preview casing but specs are not yet officially released. The key question for the A77 is whether Sony are prepared to make the same mistake again and ruin their fantastic technology with marketing-lead specifications? Here are the rumoured specs:

I am also expecting very advanced phase detect AF tracking, which could conceivably replace a follow focus for some shots if not all – as long as it works reliably. Sony’s cameras have always had an edge on stuff like this – they tend to get it working better than the competition.

I fully expect the A77 to outperform the Canon 7D and Panasonic GH2, which is what makes it exciting. The only things which are real question marks as usual with Sony is whether it will have manual controls in video mode and a nicer codec than 30p. Those are the two things which could really topple the A77, just like it does every single other Sony camera under the $6000 price point of the FS100.