[/pullquote] When you have a Need For Speed there are two people you can call – Shane Hurlbut or Metabones.

The Metabones Speed Booster adapters give us apertures as fast as F0.64 from the rare Canon EF 50mm F1.0.

The Ultra 0.74x version for E-mount fits the A7R II and turns the Super 35mm mode into full frame, with the benefit of 1 stop gain in low light and a further 1 stop gain in noise performance over the pixel binned full frame mode.

At ISO 6400 in extremely low light the Sony A7R II does have the advantage overall over the GH4 but you wouldn’t know it from looking at the LCD when shooting. This is horribly noisy and mushy when you punch in for focus. This doesn’t exactly make the job of focussing easy. Manual focus takes longer and you have less confidence it is actually in focus and not just a soft screen. Sony need to go back to the drawing board with this. They should take a look at how the GH4 does it and the 5D Mark III. They both offer pin sharp focus assists and a much cleaner image in live-view (not just in low light). 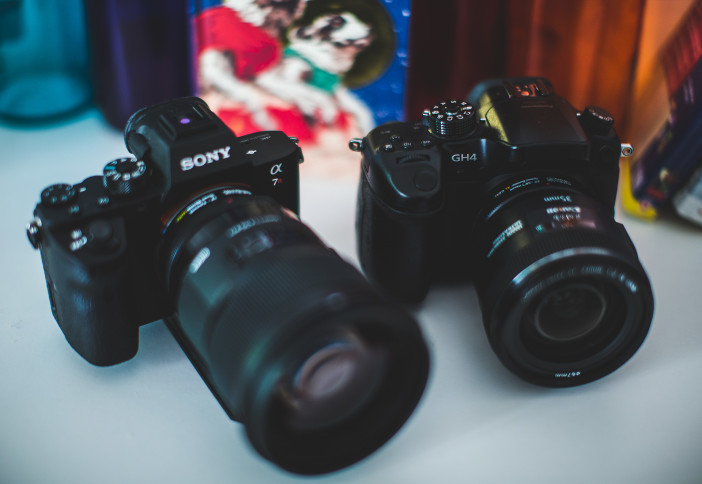 With the 1 stop gain in brightness from the Speed Booster Ultra on the Sony A7R II, ISO 6400 is really the equivalent of ISO 12,800 on a normal camera without Speed Booster. This is impressive but I didn’t find the 4K images particularly sharp or detailed. Also to be honest I expected there to be a bigger difference to the GH4 at ISO 6400 than there was. I cannot say the A7R II is a low light monster like the A7S.

Shadow areas and low contrast detail especially had quite a bit of compression and noise reduction softness even with NR turned off in the menus. Of course Speed Booster Ultra only works in Super 35mm – it vignettes in full frame as it is not designed for that. And yes the full frame mode is worse in low light, due to pixel binning.

The 5 axis stabilisation worked well on the A7R II and was able to match IS on the Canon lens, maybe even a bit better. The IS on the 35mm F2.0 is the latest Ultra Sonic IS too!

The A7R II had the nice full frame depth of field going on, which you’d expect. This is why I want the GH5 to move away from Micro Four Thirds and go Super 35mm then we have the choice of full frame with the Speed Booster.

The GH4 looked a little bit deeper, a bit more video, a bit flatter – but nothing to be concerned about and it is still Super 35mm so criticising that is like comparing the Alexa to 65mm and saying you prefer the rendering of 65mm. Spoilt for choice huh!?

The GH4 is definitely the noisier and colour doesn’t quite render as well. The A7R II held onto more saturation.

In fact the GH4 has a slight edge for detail and a finer noise grain. Dynamic range was almost the same and considering the vastly different sensor sizes and the fact that the A7R II is backside illuminated there was only around 1 and a half stops difference in visible noise, sometimes less. Much of the difference in the image is down to the way it is processed by the image processor and the different picture profiles / grading, although I did my best to get them close the images have different characteristics.

It’s just a shame the grain texture is a bit naff. It doesn’t look like film or a raw camera for that and you are definitely not getting 4K resolution at these ISOs, with detail being smudged away by noise and compression.

The GH4 has a 100Mbit/s codec as well though and manages to maintain a finer grain…hmm.

Of course the A7R II can shoot stills in APS-C mode as well and here we can see exactly what is going on without the video profile, looking at the 5K image the S35 Ultra HD image is created from. 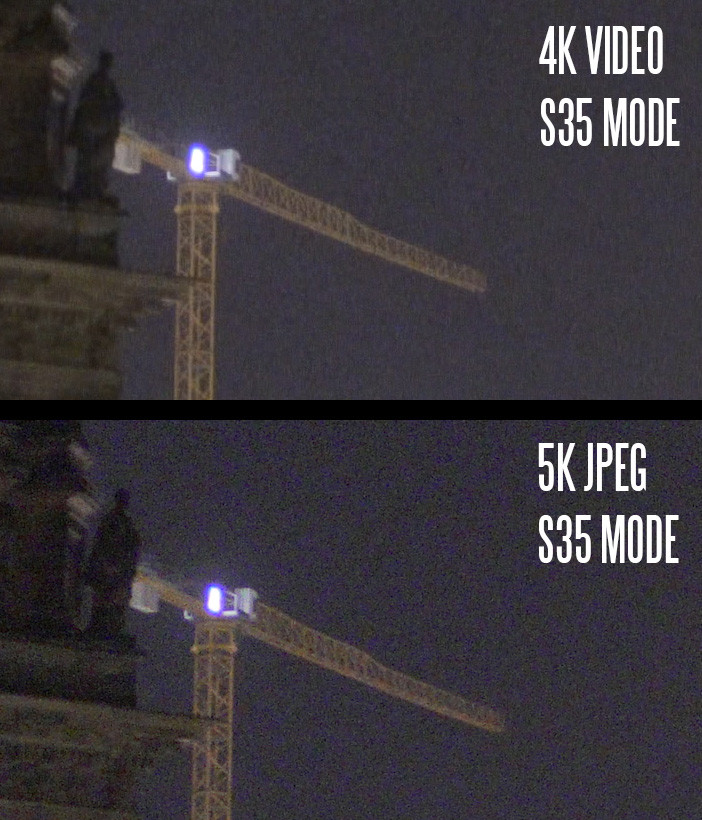 Here we see the impact of compression on the grain texture of video versus the lower compression in the JPEG. Actually I think the 25% scaling from 5K to 4K also smudges this texture, as cameras that take a 1:1 crop of the sensor output like the 1D C and GH4 have a finer grain than the A7R II.

To Sony’s credit they did recently change the JPEG engine so that it finally held onto a fine film-like grain with fine detail, earlier Sony cameras didn’t do this and had worse looking JPEGs. 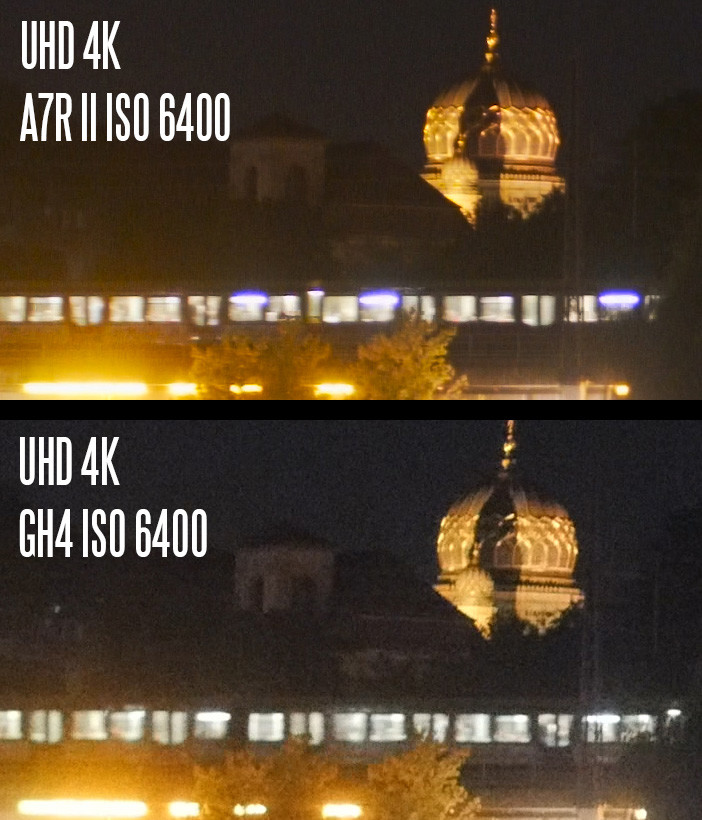 So yes the A7R II is definitely cleaner and more pleasing overall but the GH4 is not a million miles away (we’re talking ISO 6400 here!)

To get the most out of the A7R II’s 4K in low light you need add the cost of the Speed Booster Ultra to the already rather hefty $3300 of the body. The GH4 isn’t too bad in low light despite the common misconception and it is cheap enough to leave a wad of cash remaining to spend on nice stuff like the Speed Booster XL.

The A7R II is definitely NOT a match for the A7S in low light when both are shooting full frame video.

I was impressed with the two Speed Booster adapters. The Smart EF Ultra for E-mount and the EF XL for Micro Four Thirds. They are pretty much a free lunch in terms of giving you something extra without any major drawbacks. I didn’t notice any issues in the corners or any weirdness going on at all. Bokeh was also buttery smooth on both cameras especially on the Speed Booster Ultra and A7R II.