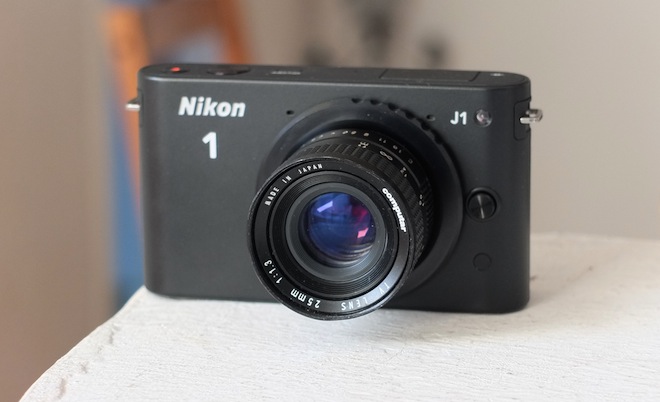 Consumer 4K is on the way, it is now as inevitable as the first 1080p stickers were on your TVs and cameras of 5 years ago. In an interview with DPReview, Nikon’s Tetsuya Yamamoto says that the Nikon J1’s (Aptina produced) sensor is already capable of a 4K horizontal resolution in video mode (although he doesn’t reveal the vertical resolution which I suspect would be lower than 2K).

I’ve been shooting with the Nikon J1 recently, using it like a digital 16mm Bolex. Since the sensor is a 2.7x crop, that is much closer to 16mm than the GH2 so more c-mount lenses can be used without vignetting, and it can go to a relatively clean ISO 1600 which you cannot do in Ex Tele crop mode on the GH2 without significant noise.

It certainly isn’t as good a camera as the GH2, NEX 7 or 5D Mark II but it has a unique purpose as a b-camera, artistic shot getter and as something very easy to focus with at fast apertures in low light.

I’ll have some footage online soon. The output is actually very nice but is somewhat hampered by a minimum shutter speed of 1/100 when shooting in PAL regions and the lack of a cinema 24p mode.

In the interview Nikon say they are also going to introduce some faster CX lenses. They don’t need to bother, you can adapt far better stuff already. I’m using some fast F1.3 c-mount lenses and a Kern Switar 10mm F1.9 which is roughly 27mm wide angle on the Nikon J1.

When to expect consumer 4K?

The first baby steps have already been made but these can safely be discounted. The real first generation of products are yet to properly arrive. Consumer 4K will first arrive in the 4K2K format and probably be delivered via HDMI version 1.4 and the new higher capacity Blu Ray discs. So the first 4K images most consumers will see on their new 4K TVs will be from DSLRs and Blu Ray. As with 1080p it will probably take an updated Playstation 4 and Xbox to help the general consumption of 4K go main stream. We can probably expect those within 2 years.