In the last few weeks the already large number of options for filmmakers have been shaken up. Current cameras all seem to fall into different niches.

There are the depth of field specialists – 5D Mark III and D800 with full frame sensors. There are the resolution and raw codec specialists the Blackmagic Design Cinema Camera and Red Scarlet. There’s the slow mo specialist the Sony FS700 and my personal favourite all-rounders the GH2 and FS100 which just keep getting better with firmware updates (the FS100 is now a world cam with latest one from Sony).

What happens next will be a fascinating fight. EOSHD rounds up the contenders.

Should it exist, the C100 is going to have to be cheap. Putting a stripped down C300 out there for $8k isn’t going to work. Putting it between the FS700 and C300 won’t do either, because frankly that isn’t possible – the FS700 is already better specced than the C300 for half the price. It is 4K ready so more future proof, and does 240fps 1080p whilst the C500 will come in at a LOT more – $30,000 in fact. I think the C500 is going to be great for Hollywood and future proof broadcast acquisition in 4K – a viable alternative to the Alexa but there is an awfully big hole under $30,000.

The 4K DSLR is basically a 1D X stills camera and lacks fundamental features like 25p, robust ports like HD-SDI and XLR, or any usability concessions like peaking. A serious mistake in my view and a very very cynical product. It is also said to be disappointing in terms of the image (not true 4K and only a 8bit codec). The 1080p mode is multi-region but said to be no better in image quality than the 5D Mark III or 1D X, which is just crazy! Everyone is in love with full frame and the DSLR form factor for video. Canon should be providing a proper 2K raw DSLR for $6,000 with an electronic ND filter and XLR in a battery grip, scrap the wobbly HDMI port and with a product like this Canon will clean up. There’s simply no excuse not to sacrifice some margin and give us a proper next generation camera, otherwise they risk losing their accidentally won foothold completely. 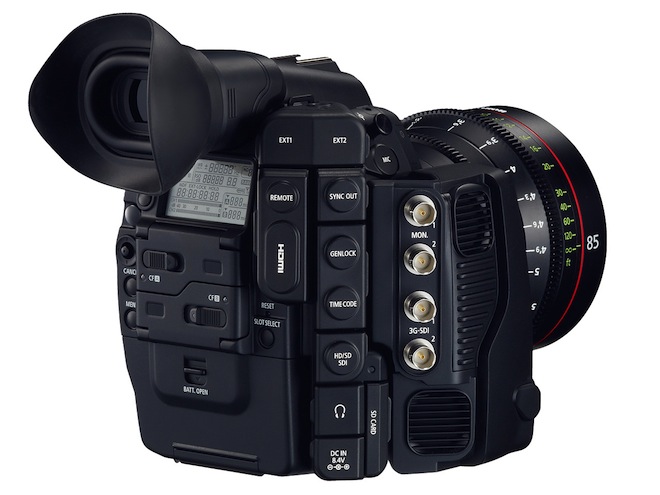 I have to admit that when news of this camera came out I had a vision of the future as clear as day, and I’ll be very surprised if the BMD Camera does not push virtually everyone else to compete, like the iPhone did in the mobile market. Yes there will be a slew of imitators BUT the great strength of a post production company like Blackmagic is their expertise in software and recorder hardware. Their Cinema Camera raw recorder is fully integrated and proven hardware. DaVinci is highly desirable as a professional post production suite. Their in-camera firmware and touch screen interface is also leaps and bounds ahead of Japanese software design. 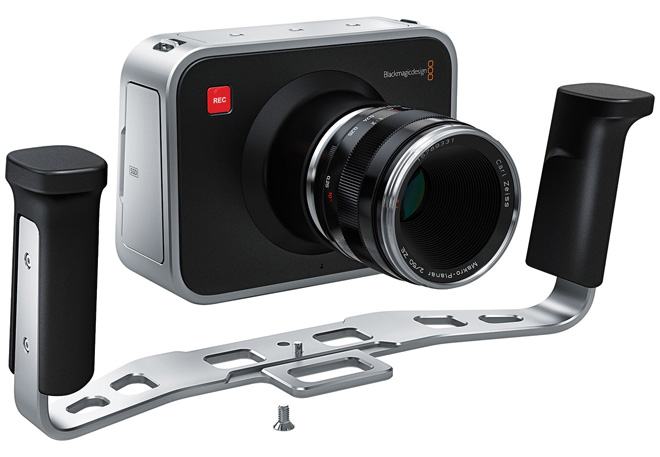 Like Canon, Red seem to be highly focussed on providing for the very high end with industry tools and not so much the lower end. The Scarlet’s ‘brain’ at $10,000 is pretty reasonable. The rest of the kit to get it operational is extremely expensive. I am not paying $3200 for an SSD, I don’t care if it is used by Fincher and Jackson, that price is out of my imagination. Red’s chief competition at the moment is Arri, Sony and Canon. Panasonic have their 4K Vari-Cam coming but until then aren’t in the digital cinema game. Arri have carved up the lions share of both film and TV. Red have a great run with many high profile shoots but their smaller support network causes doubts in the minds of many producers especially in Europe. Sony’s F65 will provide stiff competition at the very top end – though the Epic has the edge on chassis size.

Red like to portray the image of a lone gun-man fighting against the corporate might of Japan. Indeed the big question here is whether Red are corporate enough to fight Arri & Sony in the digital cinema industry or whether they are too much a loose cannon and too small to compete with large multinationals, with their wide support network, trusted brand names, huge engineering resources and strength in depth. Red do well to win high profile shoots like The Hobbit but they need more scope. Lower down, nearly everyone at NAB was in agreement in saying the Blackmagic Design Cinema Camera could be a serious blow to Red’s hopes of securing a mass market footing with 3K for $3k. As for 4K – though we don’t know the price of the 4K recording unit yet, the Sony FS700 certainly seems to undercut the Scarlet – as well as offering higher frame rates (without a crop of the sensor). 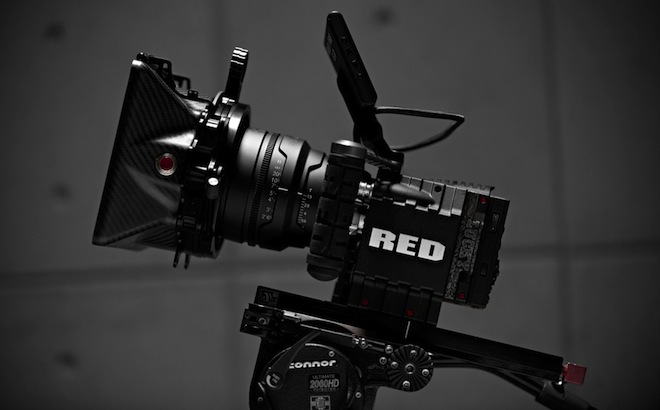 The FS700 is the bomb. It covers broad range of customers from FS100 upgraders to potential C300 buyers – so right the way from well off consumers to broadcast television, not only as a 1080p camera but as a future proof 4K ready one that does 240fps super slow mo. The 4K add-on later is a touch of genius by Sony because it gives them the luxury of being more flexible with their market approach. The market is changing so fast, Sony can wait until the others have their 4K offerings out and bend to their pricing strategy; They only have to take into account the manufacturing and development cost of the external recorder, since the camera already has a 4K sensor and 3G-HD-SDI for $8k.

Hopefully the external recorder will be small enough to integrate into the camera like the current SSD unit on the FS100 does. 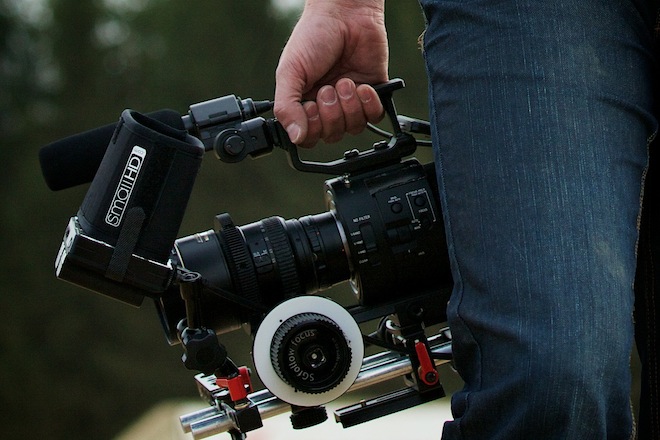 Above: Photo from Too Much Imagination’s shoot with the FS700

Panasonic’s GH2 is brilliant and the momentum keeps building (the GH3 is due this year). The hack shows what low end hardware is capable of when truly unleashed. That camera’s sensor and image processor could be in a C300 competitor if it had the same build, built in ND filter wheel, better LCD, better audio and sturdier connectivity. That Panasonic can put a consumer camera like this out with such a knockout image for $600 makes you wonder what they are capable of at $8000 when freed from the kind of unimaginative thinking that plagued the AF100. AVC Ultra seems positive but I have a couple of concerns about Panasonic – the under specced AF100 is a problem as is the lack of a replacement any time soon. Also AVC Ultra is not a raw codec. Canon have EOSRAW, Blackmagic have uncompressed raw, Arri and Red have their own codecs. Where’s Panasonic’s? 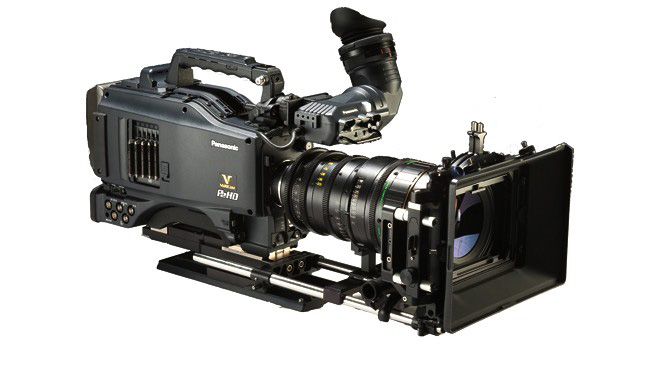 Above: the current Varicam is small chip CCD. Where is the Super 35mm version or a higher end offering above the already dated AF100?

And the winner is…

“At some point this year there will be a gap that one of these manufacturers will literally walk straight into, whether it is Sony with slow-mo on the FS700, Panasonic with their 12bit codec or Canon with a 4K DSLR.”

Well it turned out to be Blackmagic Design who walked into a gap.

We’re not talking about a small gap either, rather a gaping hole.

I’m astonished how unimaginative the big guys have been in their approach to bringing the mass market to the digital cinema market. The people who will buy the Blackmagic Design Cinema Camera won’t just be a tiny niche of indie filmmakers – they will be stills photographers, camcorder users, DSLR owners, students, artists, freelancers, journalists, small production studios and even some of the bigger ones, broadcasters, wedding videographers and even Philip Bloom.

That is some broad appeal!

Purely by virtue of silly pricing, Canon’s Cinema EOS stuff doesn’t have the same broad mass market appeal and their stills DSLRs aren’t giving us what we want (a major missed opportunity).

Whilst the Blackmagic camera is great remember however that it is only one product. Although the singular Apple iPhone mopped the floor with manufacturers who had 100’s of different models and variations on the market, filmmaking is more diverse than the world of pocketable Nokias. I think by virtue of pushing so hard on specs and being aggressive on pricing Sony are going to come out top dog. The F65 is more powerful than the Alexa for a similar price – $65k. The FS700 offers just so much for $8k it is mind-blowing. The FS100 for low budget shooters is a much better option than a Canon DSLR. Sony are also being pretty brave with their DSLRs as well – first to put 1080/60p in there – first to do a pro mirrorless camera with the NEX 7 and their sensor in the Nikon D800 is probably the best full frame sensor in the world right now. I can’t wait to see what their full frame A99 is capable of in video mode (remember it is in their new business strategy to push 4K tech to consumers).

So I can see Sony cleaning up in a broad range of areas, Blackmagic cleaning up at the $3000 point, Arri maintaining a good footing in worldwide high end production and everyone else picking up the crumbs from under the king’s table.