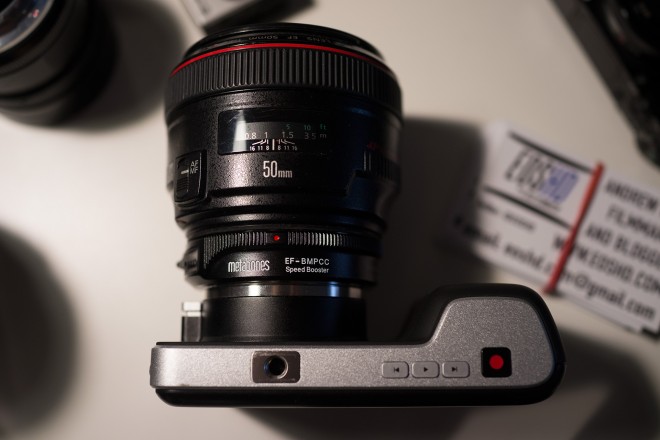 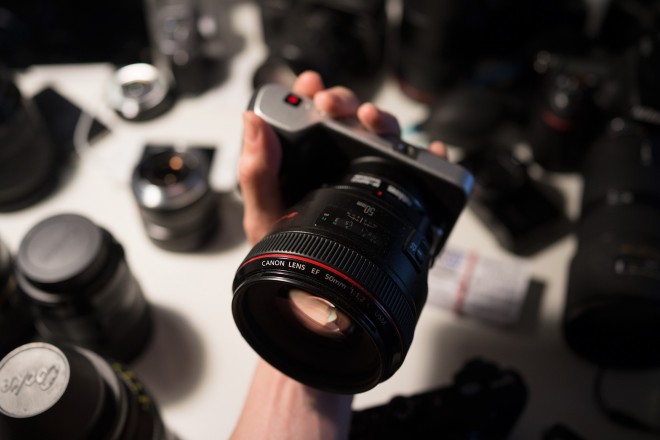 Along with Philip Bloom and James Miller I have been testing a beta of the first Micro Four Thirds mount Smart EF adapter with Speed Booster from Metabones. Now the final version is available and it will start shipping end of June for $659 at the Metabones site. This version to be released imminently is designed ONLY to fit the Blackmagic Pocket Cinema Camera.

This has the lovely 0.58x glass which turns the 3x crop Blackmagic sensor into a much nicer 1.74x crop, approaching the Super 35mm standard size for cinema.

James has shot some rather lovely footage with it. Do check that out at Philip’s evil rival site to mine 🙂

So… About that EF adapter for Micro Four Thirds.

But you know the saying “good things come to those who wait” – it is a cliche because it is true. Quality is not something you rush.

In fact when the first version of the adapter arrived in my hands I suggested to Metabones, reluctantly, to delay it. Users are a curious and adventurous bunch. It turns out this beta adapter could be put straight onto a GH4 and this caused all manner of problems because it was not designed to fit properly. Actually I am all for this kind of DIY spirit and I badly want this on my GH4!! But fitting it did cause me a raft of problems so do NOT be tempted to get the BMPCC version for your GH4. It mounts but as a failsafe the camera will refuse to recognise the lens or produce an image.

Blackmagic have not yet had the time to update their firmware to support boosted apertures faster than F1.0 and even my Panasonic GH4 had issues with insanely fast apertures like F0.7, where the lens would stop down OK at first but then flip back wide open as it hit F1.0. So the final adapter now reports the actual PHYSICAL aperture of the lens to the camera body instead rather than the boosted aperture. I find this works excellently and for me it is far less confusing when I am using a ‘boosted’ camera on a shoot alongside a normal one. F1.2 is F1.2 and that means I can match the aperture on a 5D and Pocket camera, without resorting to a calculator!

Meanwhile when it comes to a GH4 version of this adapter, what I really want is not the general MFT 0.71x booster but the BMCC 0.64x glass designed for 2.3x crop 4K on the GH4. This has been my feedback to Metabones… a 4K Speed Booster, if you like.

The 0.58x glass was insane on the GH4 – just astonishing – but like I say, it just wasn’t designed to fit 100% properly! It was giving me almost full frame FOV in 1080p and for stills but with some heavy vignetting and of course very poor corner performance. In 4K it was MUCH better but still not quite right. The 0.58x glass is designed for a Super 16mm sensor – not the much larger 2x crop sensor in the GH4.

It did make the GH4 4K mode a 1.3x crop like the 1D C though, and here are the results… the likes of which I hope we see again with a fully compatible version…

So onto the Pocket Cinema Camera…

We have seen the ‘look’ before with the Nikon version and it is glorious. This adapter is of course better because it is an active mount… Fully electronic!

Conurus have done a great job on making the adapter compatible with a huge selection of Canon EF lenses. With the Speed Booster, this camera really does deliver a beautiful image and finally we get to control aperture on the body and make use of image stabilisation (IS) on all our lovely Canon lenses. So nice to have that stabilisation back and to standardise my collection of lenses around a single mount.

It does not work with EF-S lenses like the 17-55mm F2.8. These stick out too much at the back and leave no room for the Speed Booster. Thankfully most of the EF-S lenses aren’t really worth considering as there are better EF versions to do the same job. Third party lenses designed for Canon APS-C like the amazing Sigma 18-35mm F1.8 are not EF-S, they use EF mount as EF-S is still under lock-down by Canon.

The footage from James Miller looks amazing and gives you an idea of what the Pocket Cinema Camera is capable of with the Metabones Speed Booster for Canon EF.

The other advantage of the Canon mount Speed Booster is that it is slim. Really thin! It feels like you are almost mounting the lens directly on the body of the camera like a native lens. It is noticeably thinner than the earlier Nikon version.

The new version I have only just received from Metabones so have not had time to properly shoot with it yet. I will do of course and will blog about it in the coming days.

You can see the footage I shot with the same Speed Booster glass (0.58x) but Nikon mount, shot by me a few months ago on the BMPCC below as a taster…

I found with the GH4 and the beta adapter that it worked beautifully with the highly rated Tamron 28-70mm F2.8 and Sigma 24-105mm F4 zooms, with full image stabilisation. With F2.8 or F4 lenses you don’t get the coma you get with faster than F2.0 glass. Very sharp and punchy. All of the GH4 footage above was shot handheld with these zooms.

The image was just incredibly sharp and it is clear the Brian Caldwell designed optics are worth paying extra for. I have a generic Chinese Speed Booster and it is not in the same league, very soft and lacking in contrast. If you are spending so much on a high quality lens why hobble it with a cheap generic rip off adapter?

The Canon mount Speed Booster also has the advantage of being rather universal. I can fit my Nikon, Leica R, Contax Zeiss, Olympus OM and M42 glass on it via simple second adapter rings, though the connection is not as sturdy as the proper Speed Booster in these mounts would be, it does work. 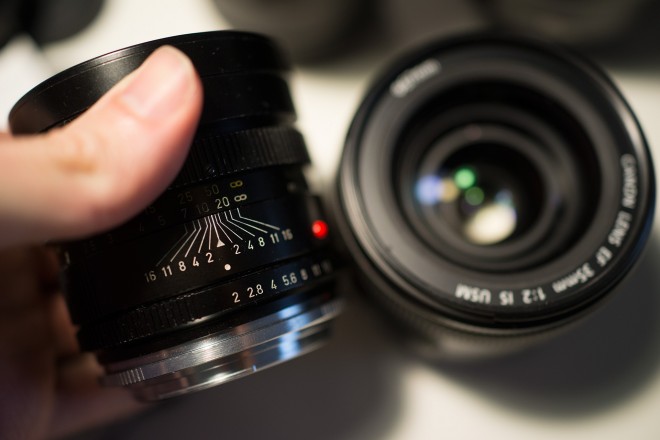 The Canon 35mm F2.0 IS has superb Ultrasonic stabilisation for handheld work, and the Nikon 14mm F2.8 is a wonderful full frame wide angle lens… So very sharp in the centre and a lot cheaper used than the Canon 14mm F2.8. 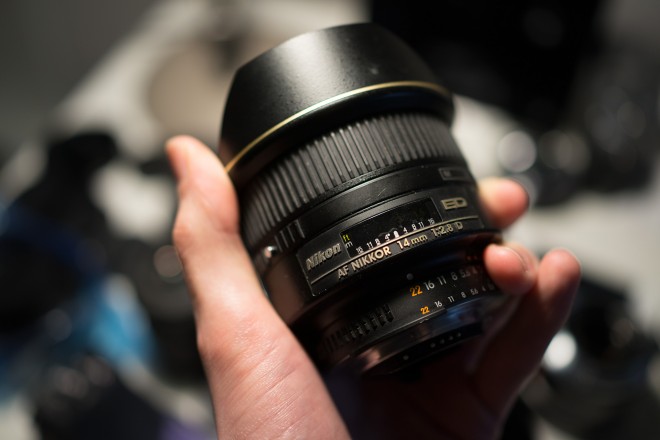 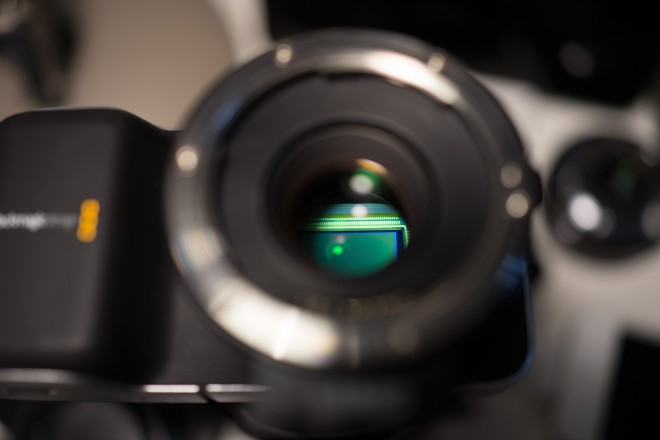 It is clear that the active Metabones BMPCC Speed Booster for Canon EF mount is a must have accessory for Blackmagic Pocket Cinema Camera users.

If I were Blackmagic I’d be bundling it with the camera!!

I love the look of a larger sensor and although Super 16mm is great in certain situations, you can’t beat the Super 35mm look for when you want more control over depth of field, a shallower DOF, lovely rendering of faces, attractive background separation even when your subject is not standing right next to you, a more 3D look to composition and of course over 1 stop better low light performance.

In fact the BMPCC is already pretty handy in low light and with the Speed Booster gets even better.

10bit ProRes has so much info in the blacks and shadows have such a detailed, silky look to them compared to the crushing blockiness and banding you get with so many compressed codecs.