The Leica SL has hit Berlin already and retail units will begin to ship in just over a week. I took the final camera in my hands to suss it out from a video point of view.

In the rush to get cameras out for the important Christmas market (mid-August to January!) seemingly a couple of cameras have had major firmware issues on arrival in shops. The A7S II with it’s 25p sunspot problem is one of them.

The Leica SL also suffers in a catastrophic way despite the firmware being retail V1.1. We’ll get into that in a moment.

The Leica SL is a full frame mirrorless camera with the best build quality on the market. It doesn’t abide by the modern gizmo philosophy of shrinking the camera for the sake of it. Like a pro Canon 1D X the grip is the same size as your hand. This is however just as well because what a beast the 24-90mm F2.8-4 is!! Although a stunning lens of zero compromise to image quality, the camera doesn’t feel well balanced with it on, very front heavy. I’m more interested in putting Leica M lenses and PL on this camera. M lenses go onto the mount via an adapter, similar to how such lenses fit a Sony body. The SL’s mount is based on the T mount Leica introduced with the APS-C T camera.

The camera feels a bit like a jewellery shop GH5. Due to being jewellery it doesn’t have the articulated screen but it makes you smile every time you pick it up. I absolutely love the standard of workmanship – no, craftsmanship – that has gone into this body. Aside from the slightly flakey dual SD-card slot door, every small detail is as beautifully implemented as the biggest detail. The main detail of course is the enormous 4 million dot EVF, the best I’ve ever seen and unless I am missing something likely the best ever made. A glimpse into the future. Simpler but no less important details like the top panel LCD are done to such a high standard it makes you sit back and marvel. Oligarchs will look at this camera on their shelf and forget about being empty inside for at least 5 seconds.

The irony of Leica’s minimalist approach and the simplicity of use inherent in the SL’s design is that the SL is the only camera you will ever need to pick up the manual to learn how to use. There are hidden functions which aren’t obvious from using it for the first time and no labels on the buttons. Hidden functions include different functions on a long hold of an unlabelled button and a jog wheel you can press, not just turn. A favourite physical control of mine was the superbly implemented joystick for direct selection of AF points and one you can press inwards to focus. That’s very useful for documentary video shoots in the heat of the action, in which case you’d need to quickly lock onto a subject before hitting record. No time for fine tuning MF with the zoomed assist. The speed of the AF is astounding and photographers will love it as well as the massive 2GB buffer for continuous shooting.

I rate the ergonomics as excellent, once you get used to them and the menus are very well laid out, quick to navigate.

The codec records at 100Mbit/s like the GH4 in 4K. It is a variable bitrate so it only uses the bitrate it deems necessary at any given moment. Sometimes it will record at 50Mbit/s, sometimes it will use the full 100Mbit/s. There are two file formats but only one codec. It can do MP4 or MOV but both are H.264 100Mbit/s with no difference in quality, audio is 16bit 48Khz PCM on both and both are 8bit 4:2:0. It would have been nice to see 10bit 4:2:2 internal and an ALL-I codec given the price and the amount of pros who will buy it. It is very much a consumer video codec on a professional camera.

Also since it is 4K we’re talking about, ProRes would have been desirable for more fluid playback in post. 4K H.264 can get a bit jerky even on a Mac Pro especially with colour grades and other effects applied, whereas machines cut through 4k ProRes like butter as it is computationally simpler. Like on the GH4 though the codec does stand up well and looks great. The quality of the 4K is very crisp but overall it doesn’t look better than an A7R II in Super 35mm mode and it’s a pity you can’t record 4K from the entire full frame sensor as on the Sony. 8bit and externally it is 10bit like the GH4. This won’t improve image quality unless you’re shooting LOG, which the camera does have.

Here I detect an issue (you can download and grade an original file shown below).

I first noticed it with the lens cap on that the blacks in LOG mode seem to start around 100 on the 0-255 luma range. This makes the footage essentially un-gradable, severely limits dynamic range and is an obvious flaw. Who does Leica have testing the video features!?

This is with the default settings. There’s a ‘contrast’ option in the menus but a LOG curve should be standard and fixed, not adjustable like this and I doubt the contrast option fixes the luma issue. The camera seems to compress everything into about half of what is available on the 8bit space. You may say LOG is supposed to bring the blacks up and not crush but this is a bit ridiculous. The blacks are light grey in LOG on the Leica SL!

V-LOG, S-LOG and Canon LOG are nowhere near this extreme and I really do suspect it’s a bug. Until it is fixed I would simply not be able to grade the SL effectively in post. With the internal LOG footage you will get terrible banding on low contrast surfaces and skies as well.

A lot of pros have already shot with the Leica SL but seemingly weren’t able to deduce what I spotted from 10 minutes with it in a shop. If either these Leica shooters A) simply did not notice the obviously messed up LOG profile or B) blogged about the SL but kept a glaring flaw secret from potential buyers, all I can say with bemusement is take a look in the mirror and ask yourself who this helped!

The further downside of video on the Leica SL is unfortunately the quality of the full frame internal 1080/24p and 120fps, it really is very poor, reminiscent of the internal 1080p of the Samsung NX1 rather than the GH4. It is soft with moire & aliasing, coming from a heavily pixel binned sensor output. 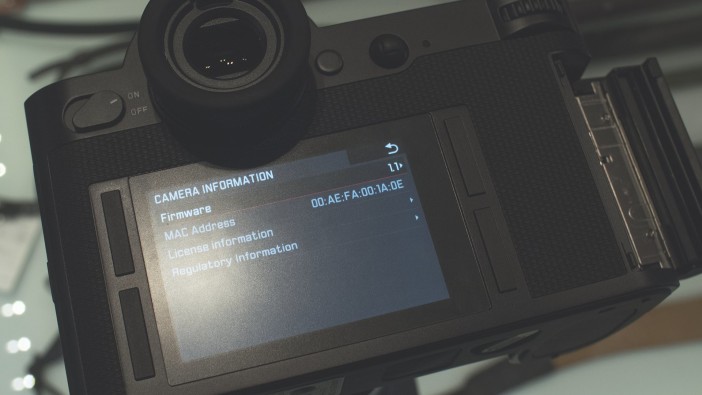 A quick look at high ISO and dynamic range

Let’s look at the dynamic range and high ISO performance of the Leica SL’s new sensor next.

These are nothing to write home about to be honest and lag behind Sony.

Dynamic range by eye looks like about 10 stops. Maybe a little bit more in the raw DNG stills. I wasn’t overly impressed.

The camera is pretty noiseless until ISO 3200. 6400 and the grain starts to intrude. By ISO 25,000 (not 25,600 oddly enough) it has fallen off a cliff and beginning to get into unusable territory. I can only assume 50,000 is a marketing feature as it looks dreadful. I’d class this performance as middle of the road really, not too bad but nothing special. The Sony A7R II’s 42MP sensor has double the megapixel count yet does cleaner 25,600 in Super 35mm 4K video mode. 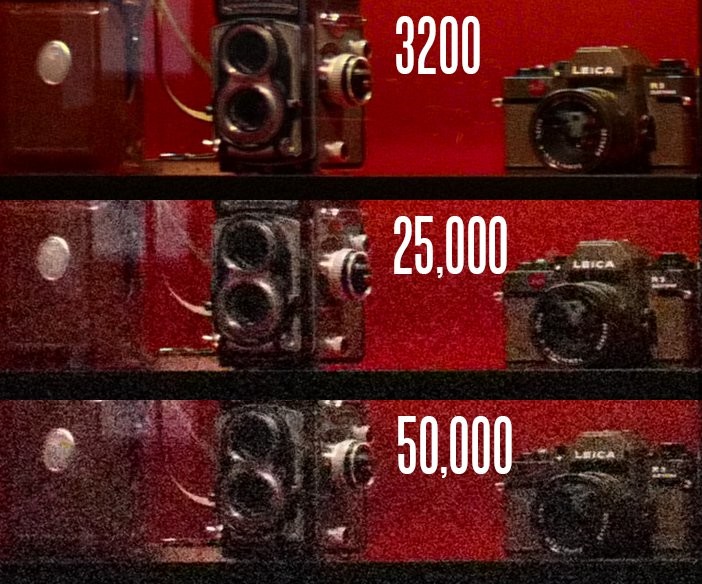 Taken purely as video camera the Leica SL may not excel in low light, the LOG profile appears to have a serious problem and the price isn’t very competitive considering the 4K competition. However in many ways none of this is a surprise. What we do have here is a camera capable of some superb video quality when the LOG mode is disabled, through the world’s best EVF on a body that is substantially better built than any other mirrorless camera.

Performance and features-wise it is a bit like reaching into the future and having a “full frame GH5” for stills built to Leica standards. For video it is like a Super 35mm GH4 albeit a very expensive one! Not counting the build, design or EVF it doesn’t really reach that far beyond the GH4 for either quality or features when it comes to video. For 7000 euros it should do, because the GH4 costs 1/6th of that.

One final observation, I believe the mount is shallow enough to accommodate Speed Booster glass for a full frame look in Super 35mm mode, although Metabones haven’t made one for it yet obviously.

Will I be buying a Leica SL for video? Nope. Will I maybe one day pick one up second hand for stills? Probably!