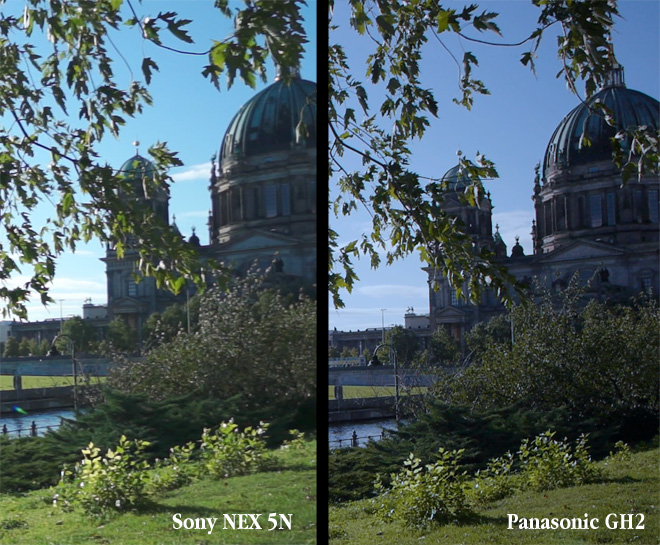 It is really great seeing yet another manufacturer pony up and enter the DSLR video market. I use the Sony NEX 5N when I want an APS-C sensor, 1080/60p for slow mo and it works great with my rangefinder lenses – small, and even has peaking for manual focus.

My work-horse the GH2 hasn’t been getting as much attention with the Sony and Nikon news of late so time put it back in the spot light like a frightened rabbit in car headlights. It is still the best DSLR for image quality in video mode. And that is why I recommend it so much on EOSHD. Simple. 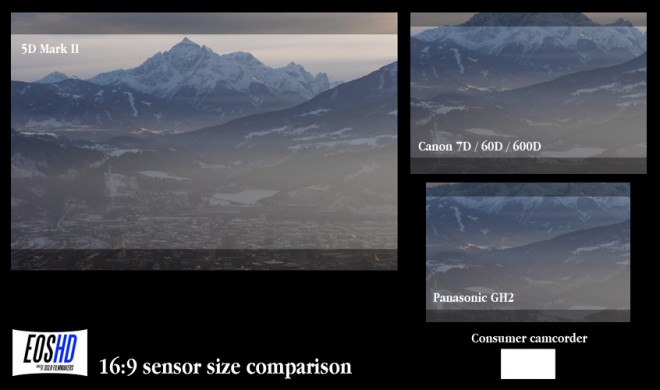 Usually people mention the crop factors – 1.5x for Sony, 1.6x for Canon and 2x for Panasonic. But because of the multi-aspect sensor it is more like a 1.86x crop whilst the Sony and Canon cameras crop 16:9 from a 3:2 sensor, increasing their crop factors when the GH2 doesn’t. Only the 5D Mark II is significantly different to the GH2 and APS-C DSLRs. 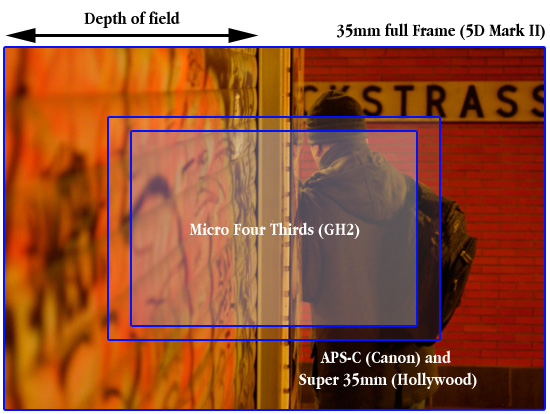 Sometimes even, the general perception is that you can’t even get a shallow depth of field on Micro Four Thirds and that your lenses are ruined! All this fuss over a 7mm difference in focal length. In fact depth of field is more dependant on aperture and the distance of the object and background to the camera.

In terms of fast wide angles meanwhile, it is true that you can’t replicate the look of a very expensive Canon 24mm F1.4L paired with a 5D Mark II. But the same goes for the Canon 7D. Finding a fast wide for APS-C is just as difficult as for Micro Four Thirds. In fact the Olympus 12mm F2 is the fastest and widest angle photographic lens for any crop sensor camera, so it is +1 to Micro Four Thirds in the lens department. 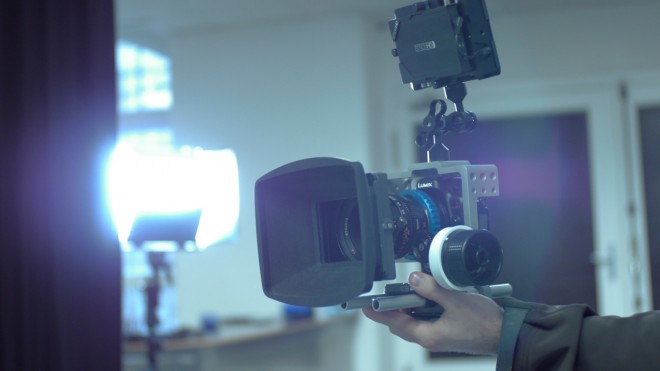 The 2nd big myth about the GH2 is it line-skips to resolve the image like Canon DSLRs. The GH2 actually has a fully digital sensor with A/D converters on each channel, and it runs at 120fps for the contrast detect AF system. Such a fast sensor doesn’t need as many dirty tricks to deliver a clean image. Furthermore the image processor contains a scaler that intelligently bins data rather than only sampling every third line of the sensor in the first place. Yes a lot of data (especially colour samples) are thrown away to produce the 8bit 4-2-0 1080p video from a 18MP sensor on the GH2, but it is done so in a more elegant way.

The high bitrates made possible by the hack also mean that more detail is maintained at the encoding stage as well, when on the Sony NEX 5N it is smudged out. 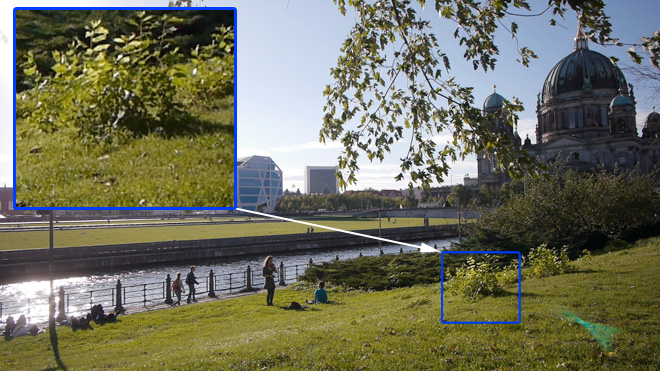 Here are some examples of where the higher bitrates (up to 65Mbit in AVCHD mode) on the GH2 come in handy. The green wavelength of light contains the most resolution in human vision and on cameras, it takes up a lot of the colour gamut. So green scenes with lots of fine detail really push the encoder. (As well as your eyes… try staring at a bright green screen!)

What does the encoder do with all that detail? It simply can’t fit it all in. The Sony NEX 5N has a great sensor and image processor which resolves almost as much detail as the GH2 (albeit it in a rather harsher looking way) but 24Mbit per second and an average 1Mbit per frame (though highly variable) is not enough to keep hold of it all on the card. 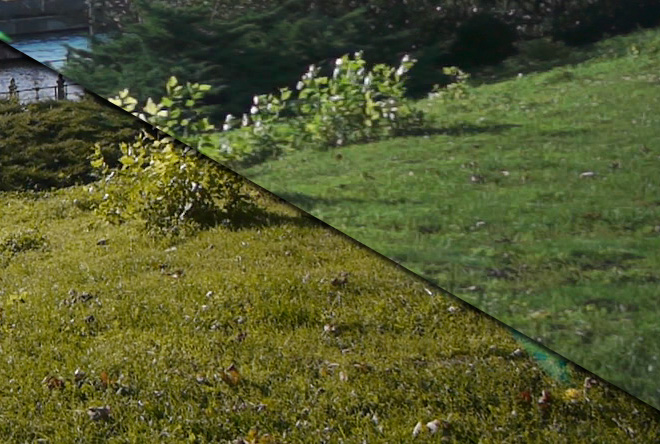 Now because of the lenses and sensor the Canon 600D is capable of amazing things we could only dream of 3 years ago but my goodness does the video mode need an update. I have graded the images below to boost shadows and mids. The original exposure was to protect the highlights at the end of the tunnel.

It is pretty clear how much more the GH2 gets out of the scene than the 600D. You can click the images to enlarge to full 1080p but to be honest the difference is plain to see even at 660 pixels wide on the net!! 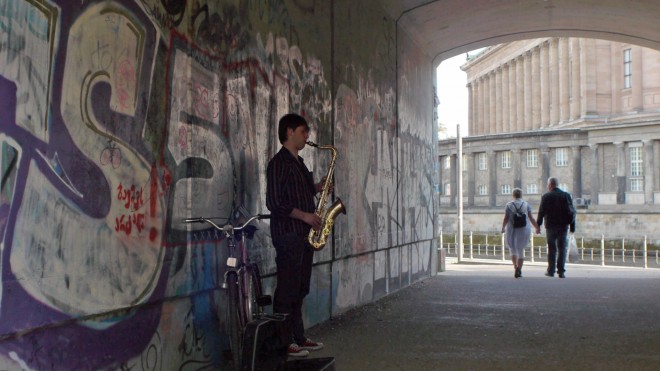 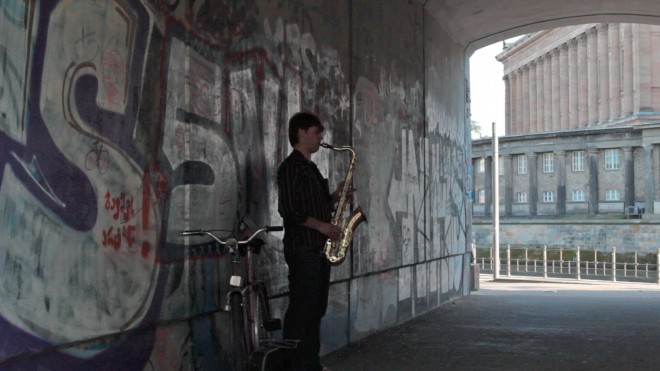 The GH2 is not just top dog for resolution, it is better than the 600D for dynamic range as well.

Lastly, when it comes to rendering smooth curved lines with high contrast edges, the GH2 stomps all over everything else that isn’t a dedicated video camera. The 5D MkII, 7D, 60D, 600D, NEX 5N, everything…

And that is with digital sharpening turned down to a minimum on all cameras.

Canon will soon replace Digic4 with Digic5. It is much needed. The 650D, 70D and 7D Mark II will be far better but I am a firm believer of shooting with what you have now.

It has thus always confused me why the Canon APS-C DSLRs were more popular for video than the GH1 and GH2. If you look at DSLR mass-meet-ups and the content on Vimeo a good 90% of people are using cameras like the 550D or 7D as well as the majority of serious paid work even when the GH2 (and arguably the hacked GH1) is just plain better for video. Their 3 year old imaging chips are laughable compared to what the modern GH2 does especially with Vitaliy’s hack.

Poor Panasonic have got the marketing and supply chains totally wrong and Canon do a great job of marketing – at least when they are not pulling the funding out from under DSLR events at the last minute (name of event redacted). Canon make sure celebrity filmmakers get to use their cameras and it is that that inspires people far more than a bunch of pixel peeping. And rightly so!

But always be aware of the facts.