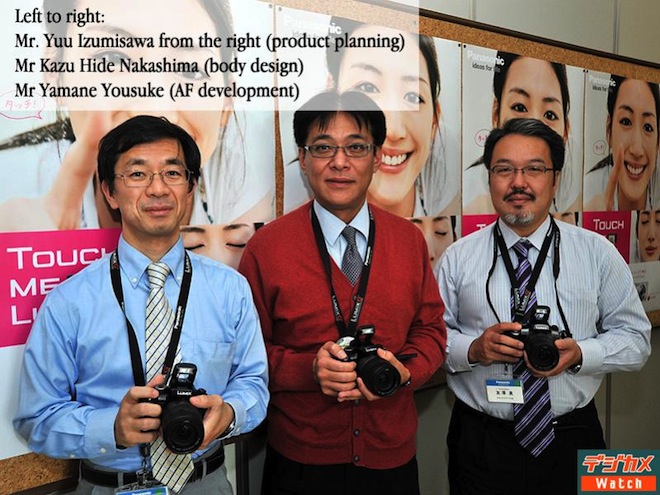 With the 5D Mark 3 expected to have 30+ Megapixels, we are seeing video DSLRs severely compromised by densely packed sensors with poor light gathering abilities. Even camera phones are racing upward with 14Mp on a tiny sensor producing terrible results.

With sensitivity and underlying technologies of CMOS sensors improving so much year on year, most of the improvement has been squandered due to the megapixel race.

Of the current crop of DSLRs only the Nikon D3S and D700 have shown the kind of low light performance possible when marketing departments are ignored.

Panasonic’s Lumix team (above) recently admitted that the GH2 was a product compromised by the demands of marketing… it’s sensor bumped up to 18MP from 14MP to compete with Canon purely for ‘marketing reasons’. This contributed to a curtailing of Panasonic’s huge step forward in sensitivity, and a increase in rolling shutter.

I have had 5 megapixel iPhone stills blown up to canvas size and hung on a wall, they look fantastically detailed. So why do we need 18, 22 or even 32Mp on our DSLRs? We don’t – they’re a hinderance, especially for video.

The GH2 has a much better sensor than the GH1, but it’s low noise at ISO 3200 relative to the GH1 is something of a magic trick. In actual fact side by side, the GH2 is as sensitive at ISO 3200 as the GH1 is at 1600. So taken in that regard, it is not as big a leap forward as we first thought… it’s just that Panasonic reigned in the ISO ratings in-line with Canon. The GH1 was closer to the real values.

Had Panasonic felt comfortable sticking to 14MP effective on an oversized multi-aspect Micro 4/3rds sensor (12MP effective in each aspect ratio), the GH2 would undoubtably have lower noise at ISO 3200 and 6400.

Canon have taken the lead with sensitivity. A more sensitive sensor at base native ISO means the sensor does not have to be boosted so much to reach high sensitivities like ISO 3200 and so it’s signal-to-noise rating is better. A high boost results in a excitable sensor, with high noise.

But Canon mucked up by allowing marketing to dictate 18MP on the 7D and 22MP on the 5D Mark II. 10 and 12 would have been plenty, and the moire / aliasing issues in video mode would also have been reduced too. The 5D Mark II would have been a D3S beater on pure merit, not just megapixels.

The consumer audience is a fickle one. The most important spec used to be megapixels, and now it’s high ISO performance. There are signs that consumers are getting bored of that now and moving onto things like high dynamic range on DSLRs and zoom ranges on compacts. Or maybe it is just what the marketing departments are deciding to thrust down our throats for 2011.

Yet the issue for Canon, Panasonic, et al from a business perspective is a real one. Marketing sells cameras and customers need a way to relate numbers to image quality, and the higher the numbers the more likely they are to buy the camera.

Consumers cameras need a global standard adopted by all manufacturers to rate image quality, and I propose to do this by pixel size.

After all a camera is a light gatherer and the more light it gathers the better resolved the image. I also propose one second tier rating related to CPU power, so consumers can at one glance gauge the potential for good image processing and video.

The real measurements for pixel size are confusing to the consumer and there are many varied ways of measuring it – pixel size is denoted in micrometers (μm) and pixel pitch is often used instead – the density of the sensor, with highly packed sensors having smaller pixels.

The easiest solution is to use the pixel pitch measurement,which currently range anywhere between 2 and 8 microns. Micron pixel pitch could be shortened to MPP. An 8MPP camera would be superior to a 2MPP camera, and the MPP race could start all over again but this time to the consumer’s benefit.

The problem with this is that it doesn’t take into account the sensitivity of the pixels which is just as important as size.

Using ‘performance numbers’ instead of specs which relate directly to physical attributes of the camera is dangerous. AMD tried it when they lost the Mhz battle with Intel, and had a PR rating for their CPUs. It was a dismal confusing mess and constantly referenced Intel as the performance benchmark! A marketing and PR disaster.

So camera manufacturers, to avoid the same trap, should simply use this…

This is similar to the current megapixel and ISO specs, but more meaningful in real image quality terms.

Pixels simply convert light (photons) to electrons and the maximum number of electrons they can hold is known as ‘full well capacity’.

Sensor designers use a property called Unity Gain to reveal the true sensitivity of the sensor. (It’s interesting to note that the 5D Mark II was actually less sensitive in terms of light collected than the 5D thanks to having a more densely packed sensor).

But the problem with this is that it doesn’t take into account other improvements to the sensor which give it a better signal to noise ratio and hence lower noise when boosted up to high ISOs, to compensate for it’s reduced sensitivity in the first place.

Stating the pixel size and the amount of electrons they can produce when light hits them is the purest way of speccing up a camera in a real way without resorting to obscure science, formulas or made up performance ratings.

It may take a while for consumers to get their head around pixel pitch and sensitivity but the numbers speak loudest. On this system the higher the numbers, the better the sensor’s capabilities.