This rig from HalfInchRails is a refreshing no-bullshit approach to DSLR rigging. Rigs are essential for handheld footage (OIS is floaty and raw handheld DSLR shooting is jittery and amateurish) but sometimes they really do make things much more expensive and awkward than they should be.

Portability and simplicity – that’s what I need. Something light and adaptable. It takes months and months of tinkering, using, re-designing to get that. It’s about refining something so that it’s fit for purpose.

A lot of the current DSLR rigs are developed just like that, but the judgement of who’s designing it is key, and for whom they design it for.

This one is designed in the true spirit of DSLR shooting, by a DSLR shooter and the judgement which has gone into the rig is based on sound experience of practical shooting be it stills or video – keep it simple, get the job done, do it as efficiently and as effectively as possible.

I think minimalistic is something which applies to this rig – something which can fit in a camera bag and not take 2 hours to put together before very shot. For me, other artists, run and gun documentary makers, indie film guys shooting on the streets, film students and professional photo / video journalists we don’t need things to be insanely complicated to set up, with endless nobs and levers. Cut the crap.

One of the big advantages of DSLRs is their small size, reduced rigging, reduced weight, and flexibility – why compromise on that?

I’ve met the chap behind Half Inch Rails once – Sam Morgan Moore – at the Canon Pro Photo Expo in London a few months back. I tried his custom built rig, which also had a follow focus on a thumbwheel next to the handle, so you didn’t have to take one hand away from stabilising the camera – and it just felt right.

Now after many months of improvement he’s come out with the Series 2 (currently in beta form). 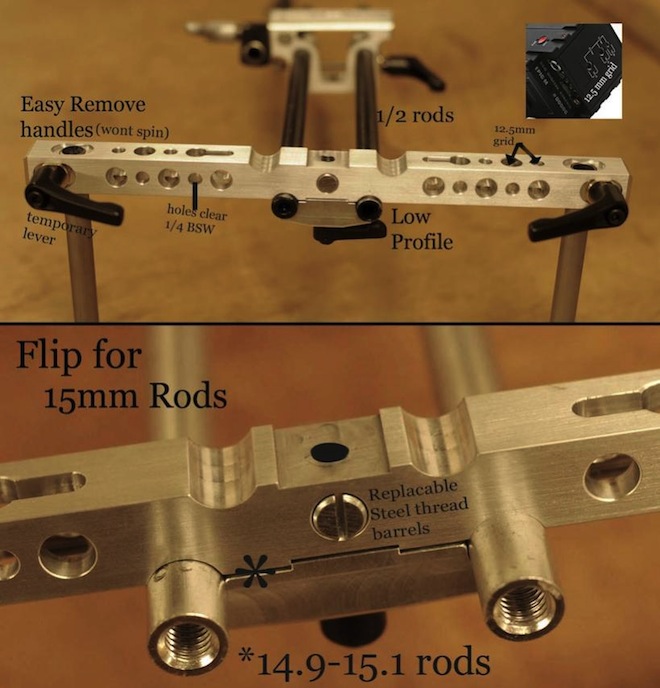 The 3-point stabilisation of a DSLR is essential for handheld footage, 4-point even better. First and second, your own two hands – makes sense to me. Weight balanced in the centre. Third, your shoulder or your eye. Shoulder if using a monitor.

The balance of a rig is very important. If it’s not balanced enough to stand up on it’s own, it won’t be much good in the hand either! It needs three mounting points on the body, equally spaced, with the weight in the middle and as low as possible to reduce the centre of gravity. Rigs are like racing cars… light, well balanced, low centre of gravity.

This is currently scheduled for a mid-February release date, although to coin a phrase everything in life changes including delivery dates. I hope to grab one to try out and finally – I may have something as close to bare bones handheld DSLR shooting as possible but with none of the drawbacks of floaty OIS and jittery handheld work.