Above: Joy Ride shot on the Nikon D800 streams in full 1080p so make sure to view full screen!

The long rumoured and leaked Nikon D800 was officially announced today. This is Nikon’s equivalent of Canon’s upcoming 5D Mark 3 and is a very attractive camera which brings almost all of the Nikon D4’s pro DSLR features down to $2999 (£2399 in the UK) but sacrifices cutting edge low light ability for crazy resolution.

Talking of Canon, the 5D Mark 3 (like the Mk II before) is expected to bring the image quality of the mighty Canon 1D X (like the 1DS Mark 3 before that) down to a consumer price point.

Nikon has now done this with the D4 but they have decided to put a Sony 36MP sensor in it. This resolution is almost useless for video but it can have one nice benefit which is a finer grain of noise.

But only if the downscaling to 1080p is advanced. A first glance at internally recorded 1080p suggests that it isn’t. More on the external uncompressed HDMI below.

By ways of example the 24Mp Sony NEX 7 has finer noise over the 16MP NEX 5N but on the 22MP 5D Mark II the basic downscaling and compression removes the fine grain of noise where the 16MP Panasonic GH2 maintains it. 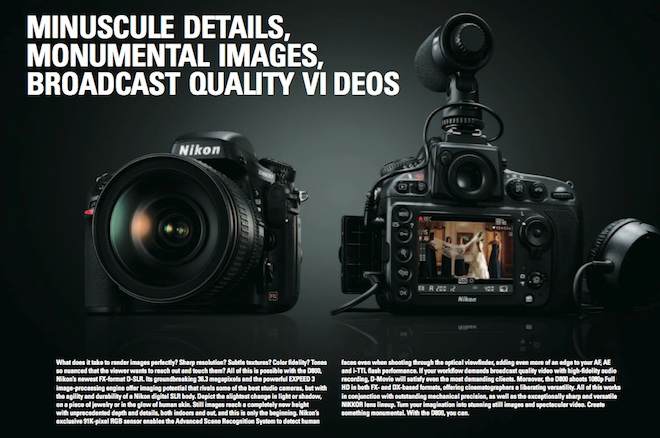 In terms of low light performance the D800 won’t be as good as the D4 for stills at high ISOs – but in video mode good downscaling and 3D noise reduction as seen on the Panasonic GH2 can make a hell of a difference. The GH2 is awful in stills mode at high ISOs compared to the 5D Mark II, but cleaner and more detailed with a fine noise grain at ISO 3200 with the hack compared to the 5D Mark II in video mode at ISO 3200.

A good video mode can overcome the limitations of a compromised sensor. Also if you compare the amount of dynamic range in 5D Mark II JPEGs – it is insane – to the amount that survives in video mode, it is a big difference.

So the sensor isn’t everything.

Despite low light performance not being the D800’s strongest suit (unusually for Nikon), there is no doubt that at $2999 the D800 is great value for money. Compare that to the D4 or indeed a mega-megapixel Hasselblad back!

The Sony-produced sensor in the D800 is 36MP and could be the same as the one to be featured in Sony’s as yet announced 2012 full frame model.

Clearly this is one hell of a sensor, and very speedy. I’ve noticed zero rolling shutter in footage so far. Sony have put a massive amount of resources into producing their own sensors lately and that investment is really beginning to show. The sensor in the NEX 7 is also absolutely on the bleeding edge of what’s currently possible. (Full review soon – just editing the footage)

Now I don’t quite understand why Nikon isn’t making full use of video when they have such capable sensors.

The Aptina sensor they had commissioned for the Nikon J1 outputs the full 10MP at up to 60 frames per second. That is 4K video right there on the sensor.

Clearly 4K video is now a very affordable proposition on the sensor side but in order to build a video camera around it you need a lot of expensive hardware and expertise – plenty of memory, fast processors, cooling and a very good encoder chip.

Nikon don’t seem to have the desire to play that game. They are a traditional photographic company when they could be a formidable player in the video industry too. 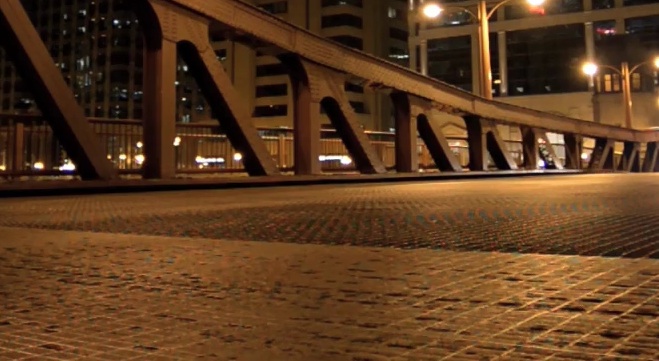 Above: moire – at least on the internally recorded 1080p – is not nice on the Nikon D800 and not a great improvement on the way the 3 year old 5D Mark II samples video

External HDMI and advanced audio on the D800

Audio support and HDMI are strong points on the D800 and it is clearly the best DSLR for that… on paper.

Now uncompressed HDMI image quality is a great mystery on the Nikon D800, as it still is for the D4, because Nikon thought that rather than to encourage pre-orders and actually demonstrate one of the camera’s headline features for video, they have kept it all hush hush and just let us view a ton of highly compressed 1080p streams on Vimeo and YouTube as being representative.

There are no files originating from uncompressed 4:2:2 HDMI on either Nikon so far and it is a massive fail on their side, certainly not the fault of the photographers they commissioned to shoot with it.

Uncompressed HDMI will avoid having a long-GOP codec which estimates between real frames. On unpredictable fast movement this causes a reduction in image quality. The 1D X and possibly 5D Mark 3 have high bitrate recording built in and the ALL-I feature of the 1D X gives you an i-frame codec which is much better for the kind of fast paced motion you see in the Nikon D800 Joy Ride video. 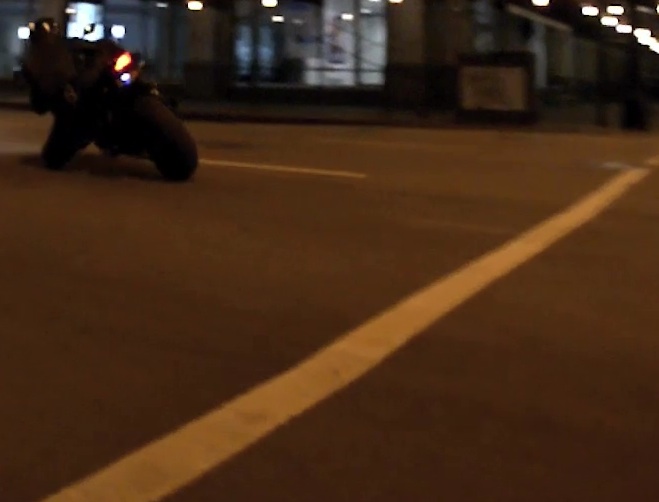 Above: the internal codec on the Nikon D800 is quite muddy, and I don’t like the harsh edges around highlights or the overall softness to wide shots (see below)

This stops contrast areas going all muddy and lends motion a more convincing and cinematic feel.

However apart from on the GH1 I have never been massively bothered by long GOP encoding of video since my style doesn’t go for a lot of fast paced action. As long as it is done properly with B frames and at a high bitrate long-GOP can be fine like on the GH2. Yes AVC Intra on my hacked GH2 definitely gives movement a very subtle extra ‘x-factor’ as opposed to having standard AVCHD with I-B-P frames and all that motion estimation trickery going on – but it is a VERY subtle difference.

The best feature of uncompressed HDMI on the D800 is all in the name. It is, erm, uncompressed!! This could seal the deal for a lot of people. To have 250Mbit ALL-I ProRes on an affordable external recorder which also doubles as a nice field monitor is very attractive indeed. But it is unlikely to fix the rather ugly way in which the Nikon D800 resolves detail. Resolution is sampled poorly on the D800. Colour is sampled at 4:2:2 via HDMI and 4:2:0 internally. Could resolution also be better sampled via the HDMI output? Unlikely, and removing compression won’t help, but it will be interesting to see.

The internal codec is quite basic and at a low bitrate of 24Mbit, far less than on the 5D Mark II especially with Magic Lantern. The image is not actually that much better resolved than the 5D Mark II (it seems from initial videos). In terms of aliasing and moire it is the same old story.

For me this is far less important when you are projecting the footage but on Vimeo and full screen on a laptop it isn’t pretty. Sadly this is how a lot of people view video these days, myself included most of the time. The internet is actually more demanding on having clean resolution that people think.

Projection (and large TVs for that matter) soften the edges of pixels like a anti-aliasing filter, unlike a pin-sharp computer display where you see all the ugliness close up. So the D800 footage will look superb on a good display when you are sat back from it.

But still it is disappointing that the D800 is stuck in the dark ages when it comes to this issue. The old GH1 still performs better than the Nikon D800 in terms of having less moire. Expeed 3 in the Nikon J1 has the same aliasing issues as the D800 and that costs just $399 so do I expect Nikon to fix stuff like this on a $2999 camera (let alone on the $5999 D4?). YES unequivocally and it is a scandal they haven’t.

A beautiful Canon C300 or hacked Panasonic GH2 image in terms of resolution and no artefacts you will not be getting from the D800 (unless the HDMI pipeline is rendered completely different – unlikely).

So if your finger is hovering over the pre-order button on a Nikon D800 today I really would very carefully consider the future. We are but 1 month through 2012 which is set to be the most jam-packed year for DSLR video yet. By Photokina in September we will have most if not all of them announced, chief amongst them the Canon 5D Mark 3, Panasonic GH3 and a new Rebel / 700D. There is also the new Sony SLT and NEX models and already confirmed is the very expensive 1D X but believe me when people see the video from this I expect their wallets to spring open like a burst water pipe. The full frame sensor in the 1D X is the fastest Canon has ever produced and is able to downscale the image onboard using far more of the original data, resulting in less binning, no line skipping and more sophisticated downscaling to 1080p. Reduced (practically to nil) moire & aliasing is Canon’s stated aim for that camera and there is a good chance the improvements will trickle down into the 5D Mark III and the new Rebel which both also feature new, faster sensors with inline A/D converters and a modern DIGIC 5 image processor.

With the Nikon D800 it is a case of being calm, wait and see…