EOSHD.com today interviewed award winning film-maker Kevin Shahinian of Pacific Pictures whose monumental effort on reality / fiction hybrid City of Lakes is turning heads in the film industry. Steve Weiss of Zacuto has been championing Kevin and for good reason – his use of HDSLRs, in particular the Canon 5D Mk II and 7D have taken the technology to new heights as you can see in the trailer for City of Lakes.

Shot on the Canon 5D Mk II and 7D, as you will see there is no difference (even to pixel peepers) between City of Lakes and big budget ‘Hollywood’ film making at the highest level. To see what a professional like Kevin has to say on using the current HDSLRs to make City of Lakes, read on…

Andrew Reid, EOSHD.com [AR]: First of all Kevin, congratulations for such a creative approach to wedding videos. In a tough commercial environment, productions like City of Lakes have given you a vital edge. What is the future for Pacific Pictures, do you plan to move into purely narrative film making or are Pacific Pictures more interested in the hybrid of reality and art?

Kevin Shahinian [KS]: Thank you, Andrew. At this point its hard to forecast the future. I’m happy with where we are and don’t see any drastic moves away from this genre in our future. If a new opportunity arises, great, but I really like the freedom & control we have on the projects we’re working on now.

AR: The cost of HDSLRs are very competitive compared to RED’s cameras and surely this is a compelling reason to use them on even large-scale paid work. But was there a purely creative reason behind your decision to use the 5D Mk II and 7D on City of Lakes rather than other cameras, specifically RED ONE?

KS: In terms of creative motivations, the low-light performance of the 5D2 was a major factor. The script called for a lot of night exteriors where additional lighting might not be possible logistically and the 5D2 was the natural choice for such a challenge. Logistically, the form factor was actually a desirable during travel and on many of our more precarious, conspicuous setups in large crowds.

AR: Video on HDSLRs is currently first generation technology. Did you encounter any serious pitfalls or image quality issues during the production of City of Lakes?

KS: The only pitfall was the overheating of the 7D, which never became a serious issue. We were proactive in covering the cameras with white towels and made sure to alternate between two bodies every so often. Although we got the warning, I don’t think they ever fully shut down.

AR: Did HDSLRs help your team compose shots spontaneously and quickly, or were there times when their lack of usability as video cameras hindered you?

KS: They definitely helped us be more spontaneous. This was a unique production in that we were combining a live event shoot with a proper, scripted film production, so at times the only choice was to be spontaneous. With the best live event crew in the world, you still don’t know what might happen. We had to be open to that, and still make it look fully planned.

AR: Were there any productions, small or large shot with HDSLRs that inspired you before making City of Lakes?

KS: The only footage I had seen was from my live event/wedding colleagues. I had heard Shane (Hurlbut) used them sparingly on T4 and was shooting a feature with the Navy, but I hadn’t seen any footage per se. 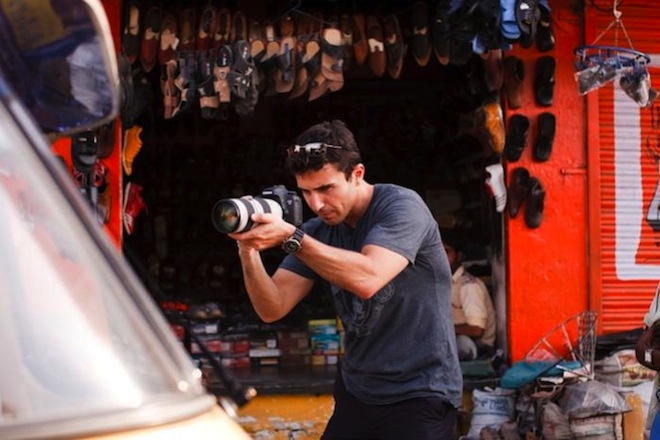 AR: I love the 2.35:1 ‘anamorphic’ aspect ratio used on City of Lakes. Please tell me more about how & why you reached a decision on this and would you consider anamorphic lenses in the future such as the LOMO 35mm cinema primes for PL mount, or will you continue to use Canon L lenses and simply crop?

KS: The crew and I already had a healthy inventory of L-glass, so the choice was an easy one. Being able to adjust the framing, and even add digital tilts to otherwise static shots was another benefit of matting in post.

AR: Have you ever used the Panasonic GH1, and if so did you feel it suitable for a professional large scale project like City of Lakes?

KS: I’ve played with one but never shot with one seriously.

AR: If you had a very limited budget and had to choose just a handful of lenses for the 5D Mk II and 7D, which do you consider the most capable for cinematic films? Any interesting choices from left-field?

KS: Definitely the 24-70/2.8 for all-around utility. The new 70-200/2.8 is another workhorse – I love the 24/1.4 paired with the 7D specifically on the jib and Steadicam. Most 85’s have a lot of glass and the 85/1.2 is no different, very sharp. From left field, there is always the tilt shift, if you’re going for a highly stylized, miniaturization effect; good for timelapses from a distance.

AR: The support equipment used on the City of Lakes is extremely professional and large-scale, and necessary for certain shots. How do you see the concept of future Canon HDSLRs panning out – as small but capable professional cameras to use with large scale rigs, or more toward spontaneous and lightweight guerilla documentary film making tools for indies?

KS: As long as DPs & operators on big budget commercial work like Shane (Hurlbut), Charles (Papert), Russell Carpenter, etc continue to adopt the DSLR into their workflow, the future for them is bright and the cameras will continue to evolve.

AR: Do you see HDSLRs like the 5D Mk II as a stop gap until Canon or Panasonic’s professional video departments release new gear or do you think this style of camera has a longer future ahead?

KS: No, I see them as separate animals entirely. I don’t believe there will ever be a “perfect” camera. There is the right camera for the particular application. I don’t think its a good idea to wait for a camera to pop up with all the features you want. As soon as the issues of the previous generation are solved, some new technology arises, “Super HD” or something and the next cool thing becomes the must-have… Of course, with all its own issues. If you want to make films, don’t wait.

AR: What improvements would you like to see on a Canon 5D Mk III and future HDSLRs?

KS: Certainly better handling of the jello and professional audio controls, XLR inputs, etc. Other features like peaking & improved focus-assist would be nice too.

AR: In terms of post production, what software was used for the most part on City of Lakes and on what platform (PC, Mac)?

AR: Please tell me more about the City of Lakes shoot – what is it like shooting on location in India, as Westerners in an Eastern culture?

KS: Lets just say it took a few years off my life, but the India shoot was an amazing & memorable experience. The cast and crew were a joy to work with and I look forward to doing it again soon.

EOSHD is grateful to Steve Weiss for introducing me to Kevin’s work.

Indeed, the equipment used to support the tiny HDSLRs on the City of Lakes shoot was large scale and high quality. The production was helped by direct involvement by sponsors Cinevate who make some very reasonably priced professional DSLR rigs and follow focuses (check out these back-stage-technology teasers at Cinevate) but even so, to achieve the shots and to do the concept justice, it takes a serious commitment, a talented crew, an incredible location and a great deal of originality to produce a HDSLR film to this standard – all of which marks Pacific Pictures out as one to watch.

I sit firmly in the art-house, low-fi HDSLR film making camp at the moment. I love flat out good ideas that somebody new to film making can bring to life with the minimum of expense and crew. But projects like this really move the whole consumer HDSLR concept to new levels, pushing the current generation of cameras to their limit – and even more importantly, in terms of creativity you can say the same. From a real event – a wedding, City of Lakes has spun a completely convincing fictional motion picture without resort to a hugely expensive cast of actors.

Danny Boyle used similar tactics in the making of Slumdog Millionaire, and I really do believe that this mix of reality and fiction is going to be an important concept in cinema’s near future.

Therefore, I’d like to coin a new term in the HDSLR community. Slumdog Shahinian 😀

More About: City of Lakes

City of Lakes is shot in cropped 2.35:1 with the 5D Mk II and 7D. Rather than a straight-down-the-middle documentary or wedding video, it’s a scripted feature film taking part during a live situation – a real life wedding in India. Founder of Pacific Pictures, Kevin Shahinian calls it a hybrid film, which I find very compelling. I believe this will become the next evolution of documentary features, with the focus on fictional story lines that emphasise with real events. For example, the director of recent Oscar winner The Cove is using a similar technique on one of his next motion pictures – a documentary about the history of Formula One motor racing between 1962 and 1982, using a hybrid of scripted fiction and real historical events.

Zacuto’s web-series Filmfellas features Pacific Picture’s Kevin Shahinian (plus Patrick Moreau) are in cast 5 can be viewed in HD here. The cast talk about challenging (or working with!) the establishment and original thinking versus mimicking others. It’s a great watch with plenty of spontaneous rapid-fire banter and discussion.