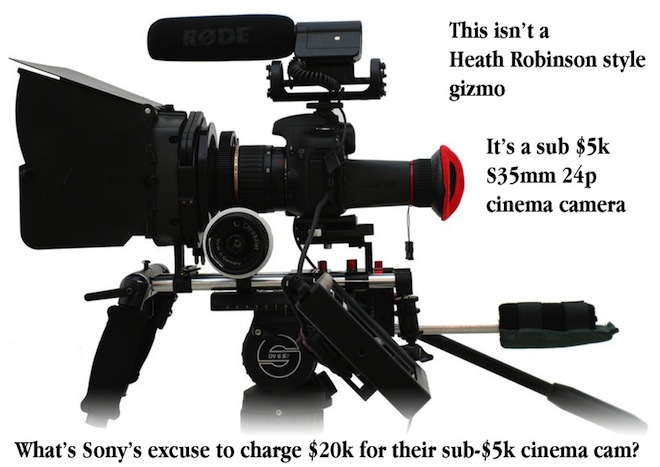 Contrary to what some believe I don’t dislike Sony or pro video cameras. Back in the earlier days of DV I used to shoot with a series of different Sony cameras. The Sony VX2000 was an affordable competitor to the legendary Panasonic DVX100. I upgraded to the more rugged Sony PD170 with XLR jacks and lots of nice pro features but unfortunately very similar image quality. My last Sony camera was the FX1, predecessor of the more expensive EX series, and then DSLRs came along and gave me what I really wanted. Better low light performance, less noise, better dynamic range and interchangeable lenses on a (very) large CMOS. A big change in the market.

Sony tells us the F3 is based on the EX1 – an interchangeable lens large sensor version of that very camera. But is it a baby CineAlta, or is it a EX1 successor with large CMOS?

In many ways it’s a few generations on from the PD170 and VX2000, in the same way that the AF100 is a few on from the old DVX100. The major difference is that this time, the F3 is considerably more expensive than the Panasonic whilst having comparable image quality and a similar feature-set. The F3 is more advanced but not by the same margin as it is higher priced, over 4x that of the AF100.

Even more astonishingly, next Summer’s NXCAM will use the same sensor as the F3 but at the AF100’s price point. From the same sensor you can assume it would be hard for the NXCAM not to have an F3-like image, but for 4x less. I expect firmware will be gimped to remove things like switchable PAL / NTSC standards, some pro features and advanced control. The prototype looks more like the simplified bare bones NEX-VG10 camcorder in terms of minimal control. Market segmentation is fine but I’d prefer if Sony did it with performance and innovation, especially at the high end of the market where larger margins allow them to do that. So against it’s main competitor the AF100, you have in the NXCAM a watered down version of the camera which should have been priced at a similar level in the first place, the F3.

Despite it’s lofty positioning in the market and price point, the F3 also does not come with everything you’d expect out of the box. An expensive external recording device via HD-SDI is required for 4-4-2, and the initial version of XDCAM onboard is only 4-2-0. As for the ‘low end cinema lenses’ which the camera will be bundled with, focus index marks appear to be lacking for cost reasons and the workaround is a roll of 1/4″ wide white chart tape.

This is a crazy work-around for a $7000 3-lens kit. ‘Affordable’ cinema lenses or not let’s get real. Are they cinema lenses are not? You can’t be half pregnant. If you can work-around a limitation on a $2300 lens with a roll of tape, then surely it wouldn’t have cost Sony a lot to add focus index marks in the first place?

This for me sums up the strange approach with the F3. It seems to be positioned as the bargain cinema camera for crews who are used to Cooke cinema primes and the true CineAlta cameras like the F35 which costs $150,000 and is almost always rented. But there seems to be little in the numbers that marks it out from a large-CMOS EX1, apart from price, hype and some extremely well organised industry hands-on events globally.

Pro cameras have become the sacred cows of video land, grazing on the rarified hills of a cottage industry which is soon to be dismantled from the outside. EOSHD for one is not linked with a manufacturer and has no relationship to protect so is not afraid to criticise & encourage change.

With the F3, Sony ignores several huge elephants in the room, seemingly completely arrogant of the competition in it’s immediate market. It is not that it is a bad product, it is just that it is not a great deal better than a AF100 and still needs some ridiculous work-arounds to get the best out of. To me, that logic doesn’t stack up and beyond the hype and cozy private hands-on sessions for industry pros, I’d think very carefully if I were Sony about their market strategy because I think they’ll be outmanoeuvred.

Now let’s look at Sony’s approach to DSLRs, which is even more hideous.

Sony have huge power to wield for the good of budding filmmakers with a large CMOS. Canon did so, being like Sony a manufacturer of the world’s most advanced large CMOS sensors. They put theirs in a high end full frame DSLR, enabled full manual controls and 24p. Very simple features but the fundamentals of any camera – control and aesthetics. What did Sony do?

First outing of their video enabled large CMOS was in a fashion camera with a Playstation user interface designed for the mass market. Then the same approach to dumbed down video was made with the mid-range Sony A55 which lacked manual controls, 24p and had a low bit-rate interlaced codec with awful non-cinema like aesthetics. This despite having an incredibly innovative pelix mirror for phase detect AF in video mode.

Then the higher-mid range consumer stuff came out – the Sony Alpha series, A580. Same story – no manual controls on an ‘intermediate’ camera which proclaimed to be all about creativity, according to Sony’s sales brochures. Here is a direct competitor in video and photographic terms to Canon’s 550D with no 24p or manual controls. Confusingly Sony’s UK website has the A580 listed under both the intermediate and advanced sections of the site, sitting alongside lower end models as well as the high end full frame pro DSLRs.

Above that you’d have to look hard to find manual controls and 24p on a Sony DSLR because none exists. Both of Sony’s full frame cameras are old, and replacements said to be in limbo. Two years after Canon, Sony do not have a new full frame competitor, in one of the biggest and most lucrative DSLR markets. Strange? Just a bit.

Look above the A850 full frame DSLR in price terms, to Sony’s NEX-VG10 video camera. Expecting 24p? Well you’d be disappointed, and for $2000 doubly so. For that price you can get 3 Panasonic GH2 bodies with full manual control, full AF with the 14-140mm and native 24p 24Mbit AVCHD. The numbers just don’t stack up in favour of Sony’s line. The F3 is a curious product which sits as both the most affordable and least affordable camera in the history of time, depending on your perspective – if you’re looking down from above at the F3 you might like the price, but most of us are looking up at the F3 in terms of price, and only sideways in terms of the image.

For us DSLR shooters, for Sony to say (and I quote) that the F3 is all about “Creative freedom, to get the shot you want, an affordable £12,000 camera which brings cinema to a S35mm sensor, aimed at budget users and mainstream users – ex EX1 users”, is a bit rich when we can get all that on a $1000 DSLR body. I’m not quite an ex-EX user but I’m an ex-VX2000,PD150 and FX1 user, not really missing the fact that I have to use a vari-ND instead of a spongy switch on the side of my fixed lens barrel.

Sony have also been very careful to adhere to industry standards with the F3. But I am not sure which rule book they’ve been reading because most broadcasters need 50Mbit 4-2-2 out of the box, not 35mbit 4-2-0. In that respect, giants like Sky and the BBC would pick up an Alexa or RED instead.

Sony are planning zooms for the F3 although these are not ready yet, so that zoom rocker switch is going to be pretty redundant for a few months.

I also don’t buy the argument from rental houses that the Sony F3’s cost is justified because it has the durability and build quality that mere video DSLR’s lack with their tacky consumer construction. In terms of durability and rigour the Canon 1D Mark 4 has the build quality to suffer life on set, day in day out, and at rental houses. (The AF100 is also a lot cheaper, only a bit less capable and has solid build). As the set of House discovered, the 5D and 1D is a more intimate thing to film with compared to a bulkier camera and it fits in tight spaces. Future iterations will also have the performance. Professionals worry about loosing a shot through moire, but this is something even the Lumix GH1 doesn’t have to the same shot killing severity. It’s easy to fix and Canon will fix this in future DSLRs with DIGIC 5 due for release well within the Sony F3’s product cycle of approximately 3-5 years.

The choice is simple….

I find it very hard to see where a 35Mbit XDCAM Sony F3 with 1080p and no RAW format fits into that picture around the $20k notch. Nice badge?

For me ‘affordability’, ‘creative options’, ‘b camera work’ and ‘indie filmmaking on the street’ – all of which Sony proclaims is the F3’s raison d’être – is firmly DSLR territory now and if you need the better handling, all that can still be sub $5k thanks in part due to the aggressive pricing of the Panasonic AF100, yet just a whisker away from F3 image quality standards.

As technology changes filmmaking so that it can be done in a more affordable and accessible way, companies still try to find a reason to justify charging 10x more for the last 5%.

But if corporations like Sony, rental houses and production crews think change isn’t going to come, they only have to take one look at the music industry. Just as with music production, no longer is filmmaking strictly an experience based ladder full of people using exotic equipment, with an elitist mindset.

It is not the first time Sony has misjudged a market.

Sony are technological innovators but some of their product strategies have been more questionable than a drunk bomb defusing squad. Sony’s game console hardware is spectacularly innovative but their software development tools were difficult to use and ignored industry standards. Their mobile phones were cutting edge but subsequently never responded to the revolution of the iPhone. Their laptops were needlessly overpriced. Their MP3 players were left in the dust by the iPod. The PSP got left in the dust by the App Store and for several years Sony had the solution at their finger tips, which anyone could have seen – fuse the mobile line with the PSP gaming line much earlier to make a mainstream hybrid with an emphasis on casual gaming and software for everyone.

Whilst they have manufacturing capability and tech-leading innovation down to a tee, in terms of strategy they’re a very conservative company who were too afraid to risk the greater R&D costs of turning the PSP into an iPhone competitor and putting 120fps 4K on the Sony F3 so that it could compete with RED and undercut the Epic. In a much more aggressive digital cinema camera market place, the F3 has it’s work cut out.

For a more positive F3 perspective from the establishment, read this