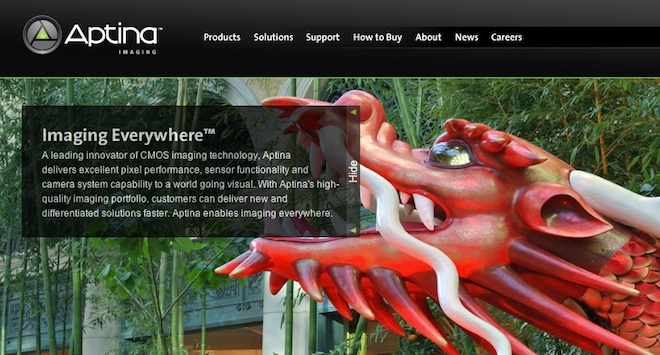 Today sees the announcement of a new DSLR sensor from one of Nikon’s recent sensor supplier’s Aptina which has a headline spec of 4K video at up to 80fps.

The highly rated company says it is ‘combining DSLR image quality and 4K digital cinema’ with the new AR1411HS sensor. Along with Nikon being on the record for wanting to add 4K video to future Nikon 1 mirrorless cameras, could the new Super 16mm sized Aptina sensor pave the way for them to do a Cinema EOS style range and 4K on DSLRs?

Canon and Nikon are very closely aligned with their camera ranges with one glaring omission. Nikon has largely stayed out of the digital video market.

That could be about to change.

Nikon have recently taken a keen interest in better video on their DSLRs and have doubled down their efforts to focus on video features such as uncompressed HDMI on the D800 and a moire / aliasing free sensor on the D5200 and D7100.

Aptina provided the 60fps 4K raw capable sensor in the Nikon V1 and V2 which saw enthusiasts shooting short bursts of 4K raw on their cameras and today sees an announcement that this technology will be mass produced and available on the open market.

The new sensor has around 14 stops of dynamic range and supports the cinema standard of 4096 x 2160 as well as the quad HD format of 4K (3840 x 2160) and 1080p at 120fps. The 1080p is ‘super sharp and oversampled’ from the 4K sensor output. The new sensor is 40% faster than the old technology at 1.1 gigapixels/sec and Aptina specifically mention broadcast video cameras and digital cinema as an application of the sensor.

Aptina say there is “strong interest from several top camera companies that have sampled the image sensor, we believe the AR1411HS is a game-changer”

Sony were recently in a patent swap deal with Aptina and the company’s technology is attracting attention. 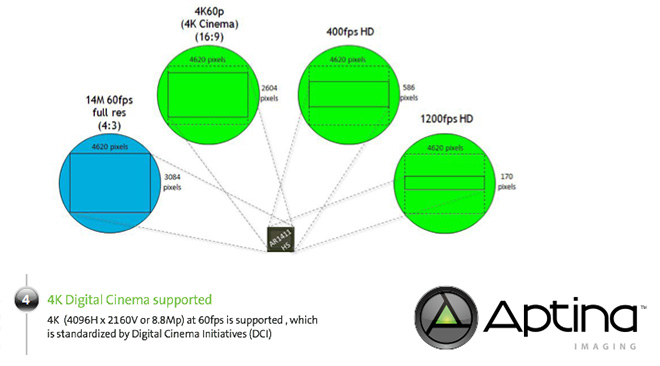 I think this is either the same or an updated sensor to the one Aptina provided Nikon for the V2. The specs seem very similar. What IS new is that the sensor is now available to buy on the open market. The Nikon 1″ sensor was never on the parts list Aptina provided on their website until now.

I really do want this chip in an affordable cinema camera right now! The sensor has very little issues with image quality. The 4K raw frames from the V2 are everything you’d expect from DSLR still photos. No moire or aliasing, very sharp, plenty of dynamic range, a nice Blackmagic Cinema Camera-like 12bit colour space and gradual roll off to highlights and shadows. In both 4K burst mode at 30fps and 60fps the V2 has very little problems with rolling shutter because of the fast readout and although the 1080p video mode isn’t oversampling from a 4K sensor readout, it too does not suffer as much from rolling shutter as the Nikon D5200, Canon 5D Mark II or Blackmagic Cinema Camera.

Nikon and Canon have followed each other on almost everything so far, therefore I’m expecting Nikon to enter the digital cinema market. This is a very affordable sensor and bought off the shelf, without the kind of extensive R&D costs Canon have had to take into consideration with the bespoke sensor made for the C100, C300 and C500.

Nikon are therefore quite well placed to offer a cheaper system based around a smaller sensor (1″ or Super 16mm). All they need to do is beef up the image processing and media handling on the existing cheap consumer mirrorless 1 series.