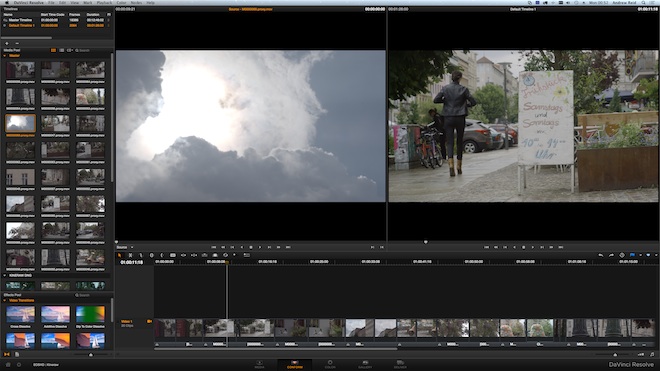 As CineForm and Cinema DNG are industry standard codecs you can now edit and grade DSLR raw directly in your NLE or colour grading software.

As the Magic Lantern project is entirely open source, there’s now a bunch of talented developers working on tools.

GoPro’s David Newman has created a CineForm converter for the Magic Lantern raw files and I’ve been having some success trying it out this weekend. It transcodes at a lightning fast 100fps on my Mac to CineForm Raw. It also does CineForm 422 and 444 at slower transcoding rates. I’ve had the best results with CineForm Raw and I’ve been able to use the RAWanizer app to batch convert a whole CF cards worth of Canon 5D Mark III raw video to CineForm Raw in the time it takes to brew a  cup of tea.

CineForm is compressed raw, much like REDCODE on the RED Epic. It uses clever code to compress the raw data and a set of metatags to describe how the raw data is handled (for example ISO and white balance). Don’t get it confused with other compressed codecs like ProRes or H.264. It is truly raw and nothing is baked in. The Kinefinity KineRaw S35 uses CineForm and it is a very well supported codec. I’ve had no issues editing it in Premiere CS6 and Resolve 9 and it is stable.

Despite the huge space saving (only 10% the size of the uncompressed Canon raw files) the codec is visually lossless and gives you full control over the raw data and all that dynamic range. It is 12bit RGB.

Right now, the app is a Windows command line app but you can set it up with RAWAnizer, another absolute gift to the community by a developer named Marten on the Magic Lantern forums. This app acts as a graphical user interface (GUI) for Magic Lantern’s Raw2DNG and David Newman’s Raw2GPCF.

I’m a Mac user but I have setup my copy of Windows 7 in VMWare Fusion 5. This runs Windows in a window (ironic huh?) in OSX Mountain Lion, and it does so superbly with barely any performance drop off or compatibility issues. You can also use Boot Camp but I find VMWare much better for quickly switching between Windows apps and my Mac. To use the CineForm converter you will need installations of Go Pro Studio Free (for CineForm 422 10bit) or Go Pro Studio Premium for the full raw and 444 flavours, which I highly recommend. For Resolve to recognise the clips, you will also need to install Quicktime Player if it isn’t already on your Windows installation, and to use the .MOV file extension with Raw2GPCF rather than .AVI. RAWAnizer meanwhile does not work in XP, so you will need Windows 7 or 8 with Microsoft .NET version 4.5 installed for that. 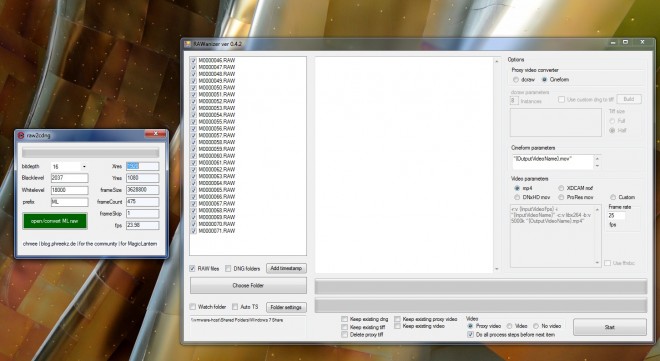 For those wanting a Blackmagic Cinema Camera style workflow, another developer Chmee has today put the finishing touches to his Cinema DNG converter. Previously Magic Lantern’s transcoding app created DNG sequences in the stills standard, which Resolve doesn’t support. I found it necessary to convert these sequences in After Effects to a non-raw codec and that process was dog slow and awkward. Cinema DNG is fully compatible with Resolve. The converter is at the moment a VERY EARLY v0.9 beta version and I’ve only been testing it since it was released just 1 hour ago at the time of writing. This app is not yet ready for paid work or prime time but if you’d like to test it, go ahead and have a play.

The sequences open just fine in both Resolve and Adobe Camera Raw and the camera metadata seems to be pretty much spot on. In this first beta release, it lacks some very basic features like batch converting of multiple files unattended, handling files larger than 2GB and labelling Cinema DNG folders with the proper clip number. There’s a couple of bugs too – faint vertical lines (which I believe the latest Raw2DNG processor from Magic Lantern has now fixed) and a Resolve compatibility issue where pink dots can be seen where burnt highlights meet darker areas of the image. That bug doesn’t occur in Photoshop or After Effects.

All in all, this just shows the power of an open system.

With an open system, the pace of development is also much faster since there’s so many developers working their own area of expertise and a huge amount of shared knowledge being pooled together online. Samsung are encouraging the same open development with their cameras and I hope Canon sees the light and begins to encourage Magic Lantern, as well as support their peers in the industry such as Adobe and CineForm to develop further tools for Canon DSLR raw video.