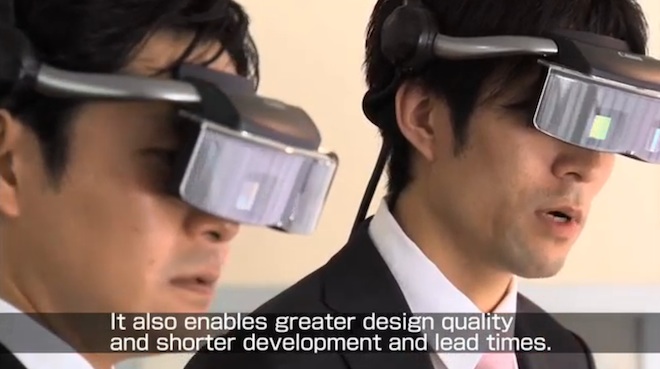 Canon have introduced a kind of augmented reality to their factories, when a designer is evaluating a physical prototype, a more detailed CGI image reacts to his movements and gives a live CAD video feed through special glasses.

As product lifecycles grow progressively shorter, it has become increasingly necessary for the manufacturing industry to introduce products to the market in a timely manner. The new Canon MR System makes possible the viewing of full-scale three-dimensional CG (computer generated) images that instantly react to changes in a user’s direction or movements, supporting the design process by allowing users to evaluate a product’s design and operability.

The system has two benefits – speed, and lower cost. Less physical prototypes are needed and small variations in design can instead be done on the more detailed virtual object. The virtual object can be manipulated with the designer’s hands, even operated as if it were a real working object.

A camera watches the designer and the augmented reality system puts him (and his movements) into a virtual world full of new products that don’t yet actually exist.

Now Canon can quickly decide where that all important button for raw video goes on their mirrorless camera! (I wish)

Read more about the system and how Canon intends to use it, along with a video here